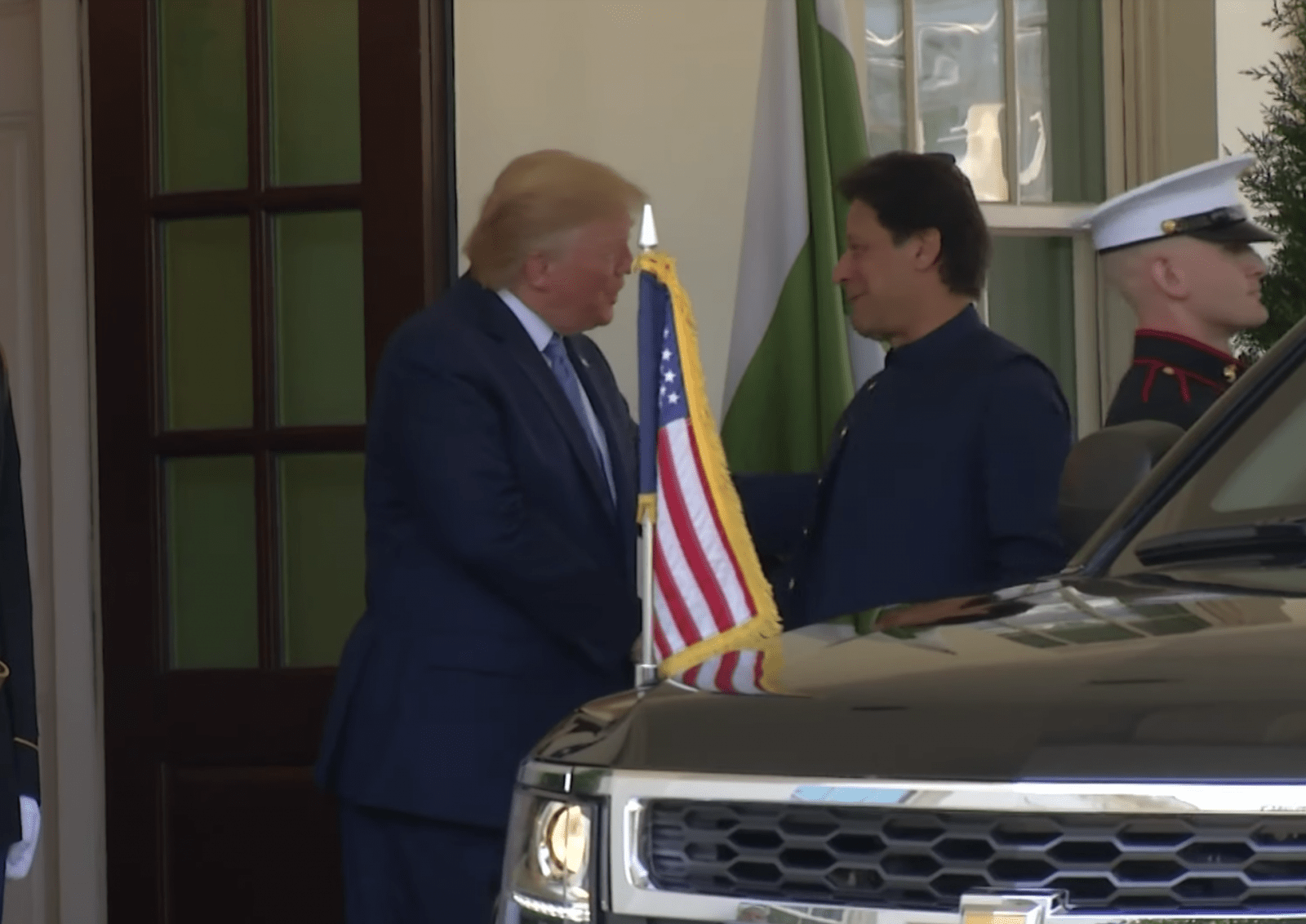 As Imran Khan left for Washington to meet Donald Trump, there were high expectations back home that the visit would alter the nature of strained U.S.-Pak relations. On his return, the whole nation stands with its Prime Minister as the manner in which he conducted the whole tour surpassed their expectations. The visit was indeed a huge success and occurred at a very crucial time. At the moment when America needs a desperate exit from Afghanistan and with respect to the ongoing Iran conflict where the U.S. might need Pakistan, the timings were ripe for a visit.

The visit was able to lay down a new trajectory for the U.S-Pakistan relations. President Trump pointed out that relations between Pakistan and U.S. are much better than they were before. He also expressed his confidence in Prime Minister Imran Khan that Pakistan would do a lot under his leadership. Apart from Trump, even member of Congress who adhere to an anti-Pakistan narrative warmly engaged with Imran Khan.

Weather it was the the gathering at the Capitol arena, the meeting at Congress, the Question and Answer session at the United States Institute of Peace, or the media talk with President Trump, Khan nailed it each time.

An interesting aspect of the meeting was the talk on Kashmir. Kashmir has been the sore point for both states for the past 70 years. Khan explained that Pakistan is willing to talk with India on Kashmir yet there hasn’t been a major breakthrough. Ergo, he requested President Trump that as a superpower, they can play a decisive role in solving the Kashmir issue. In response, Trump stated, “If I can help, I would love to be a mediator”. He further added that, “I was with Prime Minister Modi two weeks ago. We talked about the subject and he actually said, ‘Would you like to be a mediator or arbitrator?’” Trump states he asked Modi where for, and received the reply, Kashmir.

Even before the visit was analyzed in Pakistan, Trump’s remarks on Kashmir triggered a massive debate on Indian media as to whether Modi had made such a request or not. Shortly afterwards, India’s Ministry of External Affairs Spokesperson Raveesh Kumar, denied that any such request had been put forward from the Indian side and that India wanted to deal with the issue on bilateral basis.

Trump’s remarks were met with a strong response from the Indian opposition which walked out of the Lok Sabah and staged protests in the Rajya Sabha. Rahul Gandhi took to twitter to express his resentment and tweeted that Modi had “betrayed India’s interests”. Furthermore he termed the denial by External Affairs Minister S. Jaishankar in his speech at the Lok Sabha as weak and demanded that Modi himself should clarify whether Kashmir issue had been brought up in the meeting as Trump had mentioned.

The next day, Presidents Trump’s advisor Larry Kudlow was questioned on Trump’s remarks regarding Kashmir, and responded, “It is a very rude question”. He further added that the President does not make things up.

This was a big win for Pakistan as it has communicated that Pakistan does not want the Kashmir issue to linger on forever; rather it wants to see it resolved in accordance with the desires of the Kashmiri people. The rejection of any sort of arbitration or mediation by a third party spoke to the ignorant attitude of the Indian government which is keen to suppress the Kashmiri freedom struggle.

The most pertinent issue was the American exit from Afghanistan. Both leaders strongly advocated their stance that only peaceful negotiations can lead to peace in Afghanistan. The ongoing Afghan Peace Process cannot be neatly winded up without Taliban talking to the Afghan government, in order to chalk out a possible political share to govern Afghanistan after the U.S. leaves. However, if the talks continue to linger on, there would be nothing but an obvious Taliban victory.

Trump wants Pakistan to strengthen its endeavors to get the Taliban to negotiate directly with the Afghan government. If through any means Pakistan is able to bring both parties to the negotiating table, then it will indeed serve as a monumental breakthrough. However, this is a strenuous task, given Pakistan is dealing with an insurgent group which is in a strong position as it controls a large amount of territory and has the capabilities to wage violence. On the other hand, there is no glittery incentive that Pakistan has to offer them.

The Taliban wanted the PM to talk with them but the request was turned down by Khan at the request of President Ghani. However, talking to a think tank in Washington, PM Khan stated that he had discussed the matter with Ghani and would be talking to the Taliban on his return to Pakistan.

The U.S. is one of the major sources of foreign investments in Pakistan. Hence, trade is crucial for Pakistan. In the meeting, Trump has shown its willingness to increase the amount of trade that both countries practice by 10 to 20 times more than they practice now. Increased trade would be beneficial for the Pakistani economy and open new avenues for cooperation between both the states. Furthermore, Pakistan needs the U.S. at the moment to secure assistance from international forums like the IMF and the World Bank in order to stabilize its economy.

The Prime Minister also met with the Pakistani business community in Washington and invited them to invest in Pakistan. Leading American-Pakistani businessmen expressed their satisfaction with the security environment of Pakistan and identified their interests in availing different opportunities that Pakistan has to offer.

From the allegations of providing safe heavens to terrorists and blaming Pakistan for lies and deceit in 2018, to showering admiration on what it has  done in Afghanistan, Pak-U.S. relations indeed have an opportunity to reshape themselves in a constructive manner.

This visit has given Pakistan a lot to celebrate about, as the narrative that Pakistan is in isolation has been fractured to a great extent. In addition, Pakistan has reasserted its central positon in the Afghan issue and it has been able to demonstrate its firm inclination to resolve the Kashmir issue. Hence, the meeting covered all important issues.

Following the incident of 2nd May 2011, the lack of trust between the two states widened manifold. In addition, the U.S. attempted to replace Pakistan with India, which further strained the relations. However, this delusion was brief and the U.S. soon realized that Pakistan cannot be replaced with India as the Afghan issue cannot be solved without resorting to Pakistan. On the other hand, Pakistan itself desires a stable Afghanistan as this turmoil has been very harmful to Pakistani lives and the economy.

Pakistan wanted the recognition of its endeavors in Afghanistan and indeed, Trump acknowledged Pakistan’s efforts in curtailing militancy and advancing the Peace Process. All the applause and the mention of Kashmir was very pleasant for Islamabad to hear. Similarly, the COAS also met the military establishment and was given an unprecedented protocol with a 21-gun salute on his way to the Pentagon where he conducted important dialogues with his counterparts. Moreover, in less than four days after the visit, Washington approved $125 million for the technical and logistics support of Pakistan’s F-16, which is indeed a good sign.

Pakistan is not economically stable right now. However, history proves that a resilient nation can achieve milestones, whether it was defeating the Soviets in the Cold War or dealing with terrorists in the War on Terror. Moreover, its geostrategic location makes it a focal point in international relations. Hence, Pakistan won’t disappoint with regard to the peace talks either.

Obviously, the visit cannot regarded as the one which will wipe away all the tensions, yet it did break the ice and is one step forward in the right direction. Trump’s gentle tone is not surprising since it is not only Pakistan that needs the U.S. at the moment, but also the U.S. that needs Pakistan; America cannot stay in Afghanistan forever and no other state or group has the potential to convince the Taliban on any settlement. All eyes are now set on how Pakistan handles the peace talks and how the Taliban respond. Secondly, Trump rebuking Iran at the media talk signals that there is plenty of room for a potential conflict which might escalate, and this would again bring the U.S. to a stage that they would require Pakistan once again. Hence, they do not want to cut off their engagement with us.

Imran Khan has indeed set a good foundation and now it is up to him and his government to ease and strengthen the relations. In recent times, no other Prime Minister has engaged with the U.S. with such confidence and charisma. After the visit, a big crowd rushed to the airport to receive the Prime Minister at Islamabad airport. Khan himself stated, “I feel like I am not coming here from a foreign trip but that I am returning after winning the World Cup”.

India’s Joining of Hypersonic Club and its Repercussions on Pakistan

Print PDFWith the recent successful testing of scramjet-powered ‘Hypersonic Technology Demonstrator Vehicle’ (HSTDV) by India, alarming notions for the strategic stability environment of South Asian region have been raised by many folds. Under Prime Minister […]

Print PDFIndia and China share an almost 2000 km-long border as per Chinese claims and over 4000 km as contended through the Indian narratives. The actual length of the border is 3488 km, which starts […]