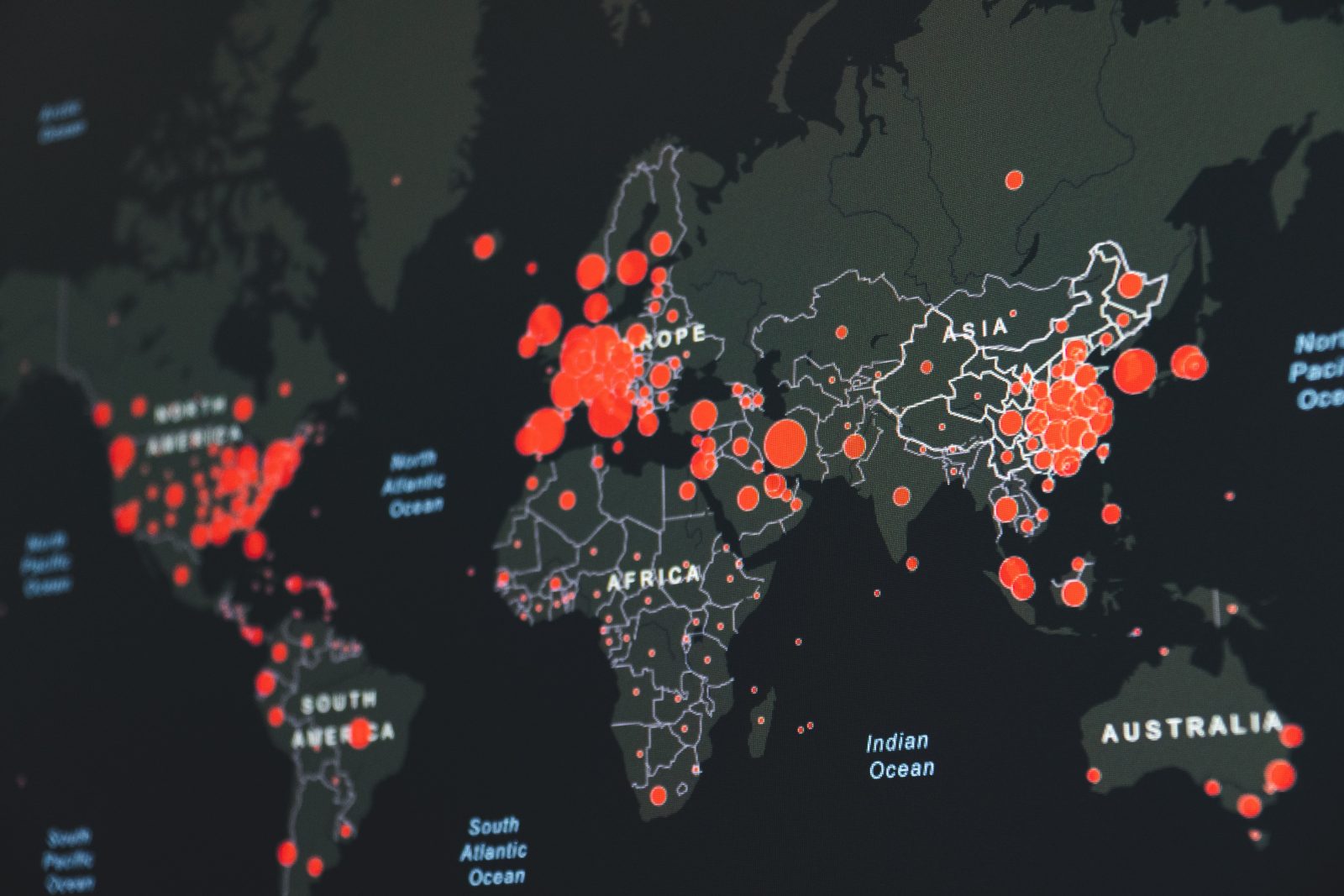 The South Asian region, in the presence of two hostile nuclear neighbours, is going to witness a turning point of its history. The outbreak of coronavirus and its entry in South Asia has complicated the regional security environment in which the governments from New Delhi and Islamabad are struggling to protect themselves against the traditional security issues. The pandemic disaster has shaken the foundations of social, political, and economic state structures of India and Pakistan. Both nuclear powers standing against each other in the regional and global political affairs are now compelled to embrace a change in their home region because the coronavirus and its intensity in South Asia have alarmed the security bells of New Delhi and Islamabad. The scarcity of economic resources, along with the issues of poverty, unemployment, climate change, and inflation, has already posed various economic challenges to both states. The outbreak of coronavirus, commonly known as COVID-19, in the existence of inefficient governance and poor public health standards, has made India and Pakistan serious victims of the global epidemic due to their close geographically proximities to China and Iran. The rising number of positive cases of coronavirus, in addition to the increasing number of deaths, has undermined the traditional security mechanism of both countries.

The architecture of national security in India and Pakistan is going to accept the significance of non-traditional security threats as the leading state authorities from both sides are trying to find the best way of not only managing the spread of the virus, but also empowering their health standards as well. Along with a number of other social problems, the effective implementation of social distancing has become the main problem for New Delhi and Islamabad. The Indian and Pakistani leaders are struggling to acquire the best sources of foreign aid, including surgical instruments. Funding from the international community to the densely populated states of South Asia has placed both India and Pakistan at the mercy of foreign assistance. In short, COVID-19 in South Asia has brought the whole region on the verge of a devastating crisis, which can drastically change the security, political, and geographical landscapes of the nuclearized subcontinent. The disease spreading rapidly among the communities of India and Pakistan has now forced both governments to act decisively. An appropriate adaptation of policies according to non-traditional security threats has become an immediate demand. The governments of New Delhi and Islamabad need to realize the significance of transnational security issues. No doubt, the whole world is witnessing an uncertain time in human history, but this crisis is demanding all state leaders to change their way of managing security problems.

While discussing the demands of the corona-prevention policies of India and Pakistan, a great responsibility lies on India, where the Modi rule has introduced countless aggressive policies at domestic and international fronts. India’s steadily increasing defence expenditures and consistently growing import of different weapons under the broad vision of New Delhi’s regional hegemonic agenda has resulted in various faces of anti-neighbourhood policy. India’s hostile way of managing foreign relations with neighbouring nations has already resulted in different wars, numerous border skirmishes, and countless points of disagreements against the territorially adjoining nations – mainly China and Pakistan. Apart from acquiring advanced defence equipment from around the globe, New Delhi has signed different nuclear deals with other states. Moreover, a miserable picture of Kashmiri society under Indian control has been highlighted by various human rights organizations, including the United Nations. With the continuation of an aggressive rule in the occupied areas of Kashmir, the Modi administration has globally portrayed a bitter picture of humanity in which a massive wave of human rights abuse has appeared from South Asia.

The discussion of the South Asian security environment under the nuclear shadow cannot be complete without emphasizing the nuclear competition between India and Pakistan. New Delhi laid the foundations of nuclear politics in the region and compelled Islamabad to take counterbalancing measures. Now, the two-sided diplomatic toxicity has reached a point where the governments of both states need to change the course of history by crafting harmonious policies for each other. An impartial and independent analytical survey of India-Pakistan hostility can easily be estimated through analysing the aggressive role of Indian policies under Modi. The academic studies carried on a comparative basis regarding South Asian politics have also explained the violent designs of the Modi government in its home region.

The outbreak of COVID-19 in India and Pakistan is going to change the toxic culture of bilateral values between the nuclear neighbours. The adaptation of theoretically strong and practically applicable policies is only possible when the inflexible national standing of New Delhi and Islamabad will be changed. The lifting of curfew from Indian-administrated areas of Kashmir while finding a peaceful solution to the Kashmir issue, in response to the opening of Kartarpur corridor, can let the two political administrations take further cooperative measures. Eventually, this approach will be helpful in taking joint steps in the eradication of COVID-19. The lifting of curfew and granting basic human needs through ensuring the rights of free movement and communication can let the Kashmiri society get medical facilities during the corona crisis. A peaceful Kashmiri society can also let the Modi and Khan governments to exclusively emphasize the peaceful future of the whole region instead of continuing their struggle over a disputed area.

Further emergency measures of both states are linked to their domestic systems, of which the situation in India is worrisome. The Muslims of India are suffering under the threats of coronavirus, in addition to becoming the victims of the Bharatiya Janata Party’s (BJP) anti-Muslim regime. The continuation of aggressive policies formulated on religious bases is demanding from the Modi government the adoption of a comprehensive corona-prevention policy beyond ethnic and ideological disparities. This approach will not only improve the living standards of Indian society, but also encourage the Modi administration to support a regional corona-combating alliance starting from the indigenous level. The initiation of a corona-combating policy, minus Modi’s aggression, will not only be reciprocated by Prime Minister Khan, but could also be launched as a regional approach to overcome the spread of coronavirus. Recently, a video conference held between eight members of the South Asian Association for Regional Cooperation (SAARC) has discussed the idea of crafting a regional approach for controlling the pandemic. During the digital meeting, Pakistani authorities tried to highlight the Kashmir issue by mentioning the demand for lifting the curfew from the Indian-occupied areas of Kashmir. Moreover, the political authorities from Islamabad endeavoured to let the SAARC members consider the pain of Kashmiri society, which is living under constant fear of Indian forces, even when going through this health emergency. The regional meeting discussed a number of steps that could be taken against COVID-19, but the formulation of a comprehensive framework of the corona-controlling strategy is highly dependent on South Asian politics. Without undertaking rational measures divorced from Indo-Pak hostility, the crafting of a regional corona-eradication strategy cannot be treated as a practical measure.

The South Asian region, presently, highly vulnerable to the spread of diseases, is demanding the state officials of the two nuclear states to take comprehensive measures against the overwhelming wave of non-traditional security threats. The skyrocketing levels of corona cases have clearly communicated to New Delhi that signing defence deals and increasing the imports of technologically advanced weapons is useless. The stretching of naval muscles, along with the acquisition of various space weapon capabilities are inappropriate measures to protect a nation from the impacts of a virus.

Bilaterally cooperative and diplomatically pleasant interactions between India and Pakistan can protect the whole region from worse impacts of COVID-19. A joint response to the lethal effects of epidemic viral diseases can further enable the Indian and Pakistani authorities to overcome their economic vulnerabilities while passing through the most critical phases of their history. The improvement of health care systems parallel to increasing public healthcare guidelines has become an immediate demand for the two nuclear powers. Moreover, the production of surgical masks, testing kits, detecting devices, and the acquisition of corona-eradicating vaccination has become a more serious issue than acquiring defence equipment from around the globe. In this way, the conventional wisdom of Indian leadership obsessed with the anti-Pakistani or anti-Muslim approach will not be suitable in the future. An antipathy towards Pakistan at regional and global levels cannot be productive for India. The future of South Asian politics will witness the transnational security issue in which the outbreak of deadly viruses can easily be controlled through a joint mechanism. The proponents of stretching strategic muscles in the territorial and naval affairs of South Asia will recognize the demands of increasing cooperation among the neighbouring nations analogous to implanting the policies of social distancing and public lockdown. So, a mutually agreed and diplomatically cooperative coronavirus action plan with the support of New Delhi and Islamabad is needed immediately.

About Dr. Attiq ur Rehman 3 Articles
The author is Assistant Professor at National University of Modern Languages, (NUML) Islamabad

“The Fate of Terrorism and Extremism in Pakistan”

Print PDFAnalyzing the terrorist activities in Pakistan over the last 2 decades, a visible decline can be observed since 2013. Terrorism grew from 2000 to 2013 and was at its peak, but it decreased from […]

Print PDFThe world is going through a parlous situation at the moment. Everything seems to be obscure and dubious. The current state of affairs for every nation include trying to stop the spread of Covid-19 […]

Non-Traditional Threats Peace and …by Huma Rehman13 hours ago