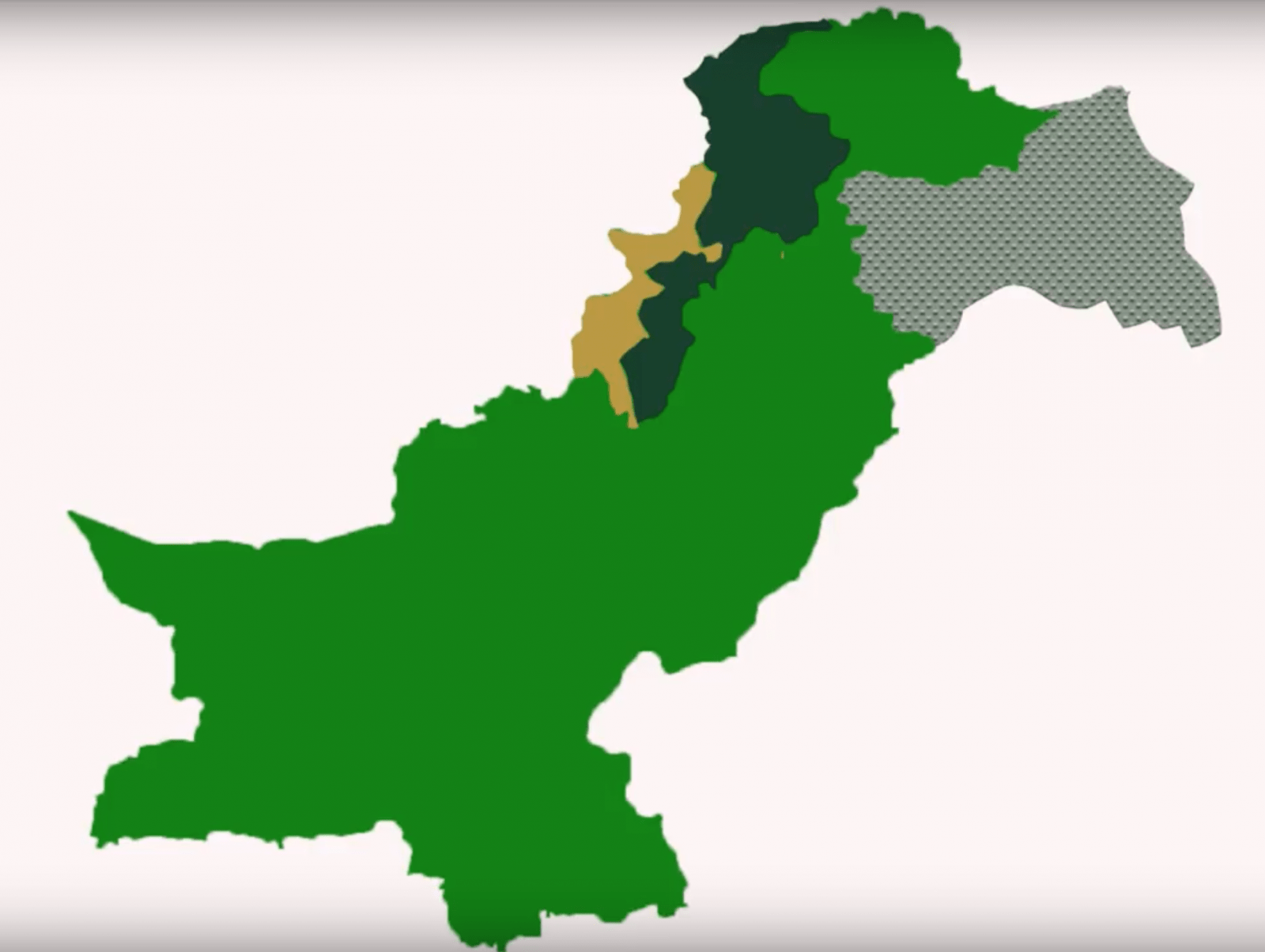 Coincidentally, the introductory piece of the novel truly depicts the tale of the two communities, being narrated below. In the past few weeks, we have been exposed to news regarding these two communities residing in Pakistan. Both have impoverished and underprivileged backgrounds, have tremendous potential but ended up on opposite sides of the divide. The two communities happen to be the people of Gilgit-Baltistan, Chitral on the one hand and on the other, the inhabitants of the Federally Administered Tribal Area (FATA), who have now been merged into the Khyber Pakhtunkhwa (KP) province of Pakistan.

Being a crew member of the Air Transport Squadron of Pakistan Air Force, my first exposure to the residents of Gilgit-Baltistan and Chitral has been since the early 1970s, when I joined the squadron. Since the territory was deprived of developed roads and proper airfields, most of the supply of logistics used to be through aerial drops. Some of the drop zones were located in narrow valleys and the terrain was so rugged and difficult that if we ended up in the wrong gorge, there was no maneuvering space to turn around. The inclement and rapidly changing weather was also a major deterrent to the aerial delivery missions we carried out. It was only when we started landing there, that we became fully aware of the abject poverty and lack of resources for the residents. Thus, it was a pleasant surprise, when Gilgit-Baltistan and Chitral was included in the itinerary of the Royal visit of the Duke and Duchess of Cambridge to Pakistan in October 2019.

There is every reason to take pride in the miracle that has been accomplished in the territory mentioned above owing to the Aga Khan Rural Support Programme (AKRSP), a private, non-profit company, established by the Aga Khan Foundation in 1982 to help improve the quality of life of the villagers of Gilgit-Baltistan and Chitral.

This article is not to promote the AKRSP’s development approach, but it is a demonstration of how an underdeveloped, hungry, uneducated, and penurious community was provided the opportunity to generate confidence in its abilities. The program has been based on the belief that local communities have tremendous potential to plan and manage their own development, once they are organized and provided access to necessary skills and capital.

The rest is history because AKRSP’s efforts over the past three and a half decades, have transformed the locals to secure many notable achievements in social and economic domains. Key achievements include manifold increase in incomes, construction/rehabilitation of more than 4000 small infrastructure projects (bridges, roads, irrigation channels, hydropower units and other small projects), the planting of tens of millions of trees and the development of hundreds of acres of marginal lands, developing a cadre of more than 50,000 community activists, mobilization of nearly $ 5 million village savings, and the establishment of more than 4,993 community organizations. Most importantly, the literacy rate in Gilgit-Baltistan is 73% but in Chitral, it has shot up to 98 percent while women empowerment in this region is the highest as compared to elsewhere in Pakistan.

Let us now examine the other community, the tribals of FATA. When the Jamiat-e-Ulema-e-Islam (JUI) led by Maulana Fazlur Rahman descended upon Islamabad on 31 October 2019, he brought with him a force of followers, who are products of Madrassahs being sponsored by him. The protest rally comprised a group known as Ansar-ul-Islam, who were dressed in khaki uniform and were wielding staffs painted in the colours of the JUI. Most of them hailed from FATA. They were obedient and fiercely loyal to their Ameer. During the sit-in by the JUI, the Ansar-ul-Islam would wander about the streets of Islamabad, armed with their staff. Despite the fact that they behaved responsibly, the locals felt traumatized. When asked why they are part of the protest, their response was that the government of Pakistan has allowed Israel to invade Pakistan, while Kashmir has been compromised and sold to India and Islam is in danger under the present regime, thus their spiritual leader Fazlur Rahman has ordained them to be the saviours.

One cannot help but feel sorry for these youth belonging to FATA, which comprises independently fierce tribesmen, who have noble traditions of warm hospitality. Unfortunately, they are also simple minded and the rugged terrain they reside in has kept them devoid of development, education and employment opportunities. To make matters worse, charlatans have exploited them using religion. In the late 19th Century, Mullah Powindah Maseed, a spiritual leader and freedom fighter in the Pashtun tribe of the Mehsuds, based in Waziristan, led a long-standing guerrilla insurgency against the British forces.  In 1935–36, Mirzali Khan, a tribal leader in Waziristan, who was later given the title of “the Fakir of Ipi” by the British, started a guerrilla warfare declaring it as Jihad against the British forces in Waziristan. In 1947 the Fakir of Ipi demanded a separate state of “Pashtunistan” comprising all Pashtun majority territories of British India, instead of being made to join Pakistan. However, the British Raj refused to comply with his demand. After the creation of Pakistan in August 1947, Mirzali Khan and his followers refused to recognize Pakistan, and launched a campaign against Pakistan, which had to be quelled by force.

For decades, the tribesmen of FATA had their own system of governance based on the tribal system. Their traditions of hospitality welcomed even fugitives from justice. Following 9/11 and the invasion of Afghanistan by US-led NATO forces, most of the Al-Qaeda and Taliban warriors entrenched themselves here and continued to target allied forces through hit and run raids. One cannot forget local commanders like Sufi Nek Muhammad or his son-in-law Mullah Fazlullah, an illiterate chairlift operator aka as “Mullah Radio” because of his clandestine radio transmissions on a roving FM transmitter inciting locals to insurgency. The advent of Tehreek-e-Taliban Pakistan (TTP) which was wreaking havoc in major urban centers in Pakistan, teamed up with Al-Qaida and Afghan Taliban as well as foreign militants like Chechen, Arab, Uzbek and even Uighurs, who had been given sanctuary by local tribesmen, now became a threat both for Pakistan and foreign forces in Afghanistan.

Swat, which had started to develop rapidly because of its touristic opportunities, unfortunately became a stronghold of the TTP. Nobel Laureate Malala Yousafzai was targeted by the Taliban because she had raised her voice in support of women empowerment and the right of girls to receive education.

Various military operations managed to stem the rot of the young men being exploited in the name of religion to become suicide bombers and hardened militants. Their sense of deprivation had been exploited and their limited religious beliefs had been manipulated with the promise of entering heaven with forty selected friends and relatives. It may be recalled that following the invasion of Afghanistan by the USSR in 1979, CIA and Pakistan had used the services of the Madrassahs to train the Afghan Mujahedeen and volunteers from various Muslim countries to wage Jihad against the Red Army. USSR retreated from Afghanistan in 1989, but the Madrassahs, which received huge funding during this decade and produced fierce fighters of the ilk of the Taliban founder Mullah Omar, TTP stalwart Baitullah Mehsud and thousands of others, continue to wield a lot of influence.

The 2014 military operation “Zarb-e-Azb” against terror bases in North Waziristan may have succeeded in curbing terrorism but the root causes have not been addressed, nor serious development plans put in place. Resultantly, in the absence of education centers, employment opportunities and even means of proper sustenance, the religious exploitation continues. Impoverished parents are forced to send their offspring to the Madrassahs which provide free education, boarding and lodging but religious leaders continue to hold sway over the madrassah students.

The community comprising the people of FATA provides a stark contrast to what befell the residents of Gilgit-Baltistan and Chitral. The Agha Khan Foundation enabled the latter to build its capacity and change its fortunes. The people of FATA too deserve a guardian angel to visit them and transform them from rags to riches. Swat already has a development plan to optimize its potential of becoming a big tourist attraction in the world, due to its scenic beauty, geographical location, climate and natural resources.  The ski resort of Malam Jabba has been restored to its original splendour after its devastation by the Taliban. Educational institutions, communication infrastructure, are being reconstructed and Swat will regain its glory.

It is the downtrodden people of FATA, who deserve special attention. President George W. Bush had floated the concept of setting up Reconstruction Opportunity Zones (ROZs) in FATA and Afghanistan as an element in the US Government’s counter-terrorism and regional economic integration strategies but it remains a pipe dream. While the government of Pakistan is chalking up development plans for KP, since FATA has now merged with it, there must be allocations for Public Sector Development Programme (PSDP) for the tribal agencies in the requisite budget. Cash strapped Pakistan may find itself constrained but it does not need to beg or borrow, nor seek motivation from other countries. Why look far, the live example of Gilgit-Baltistan and Chitral is enough incentive. Average Pakistanis are very charitable, and we have seen them in action whenever any calamity has struck their homeland. Their only problem is that they want assurance that their donations are reaching the deserving people and will not be squandered or misappropriated by corrupt officials. The United Nations as well as EU have special funds for projects which are meticulously planned for execution in a transparent manner. The solution is to make a master plan where the tribesmen can maintain their rich traditions, culture, norms and mores but they are assisted in participating in projects which are aimed at education, vocational training and optimum utilization of their resources so that they can help themselves and are not led astray by demagogues to serve as cannon fodder or innocent participants in their heinous plans.  Surely, they deserve a better future like their kith and kin from Gilgit-Baltistan and Chitral.