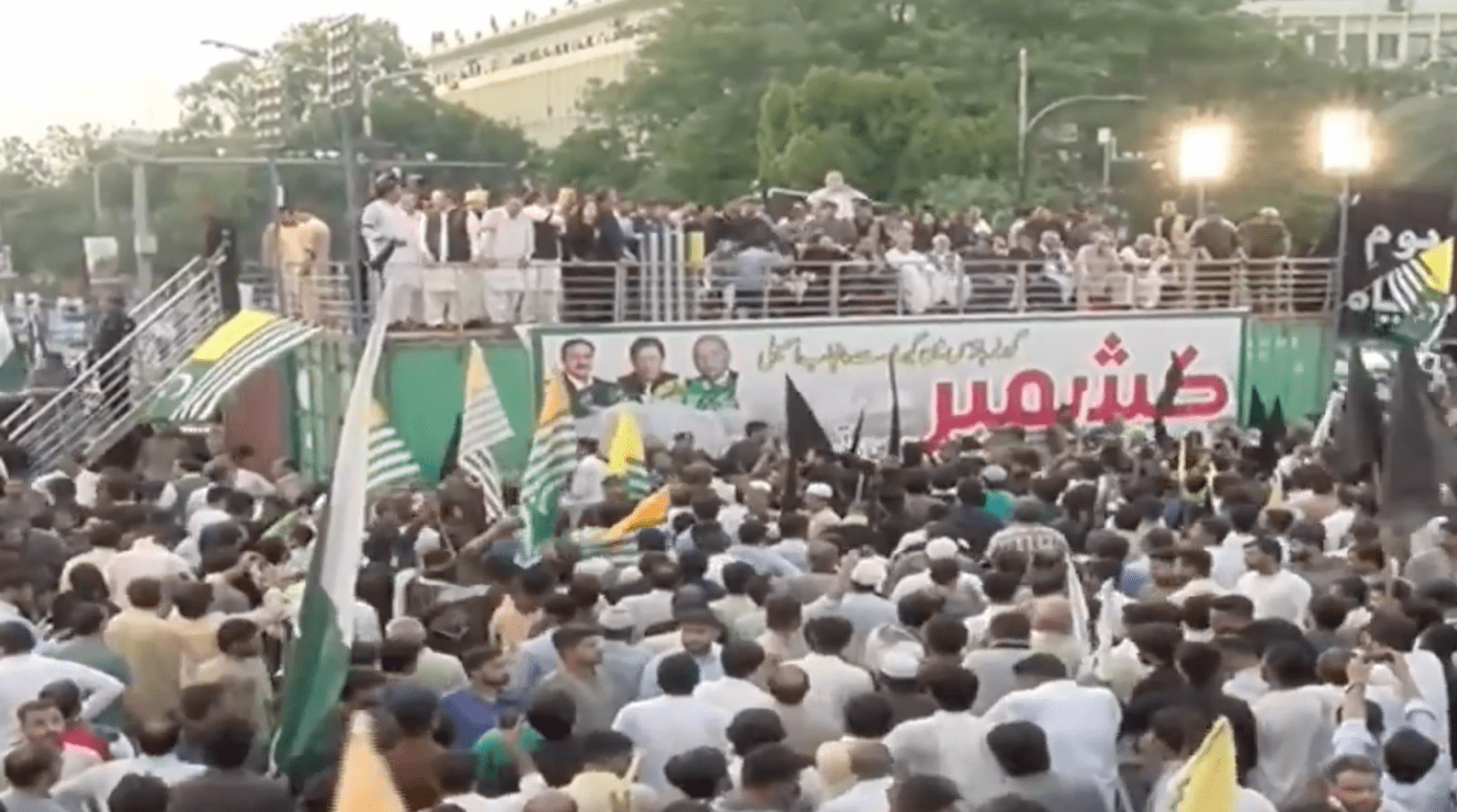 Does Imran Khan ignoring the letter of Syed Ali Geelani, veteran Kashmiri freedom icon, epitomize the PTI’s Kashmir policy? Does the PTI, in fact, have an effective Kashmir policy?

A deeper analysis is required to determine whether PTI’s approach works toward applying pressure on India for its annexation of Jammu and Kashmir (J&K) bears any dividends. In doing so, the presence, or absence, of a long-term strategy and serious commitment on the part of PTI can be ascertained.

The PTI has claimed practical progress in lobbying the U.S. for taking a position on the Kashmir dispute that pressurizes India and asserts that the ‘global’ narrative on Kashmir is now shifting. The U.S., of course, is held by the PTI throughout this narrative as the indispensable third-party stakeholder. However, things appear to be headed in the opposite direction, with the Indo-US alliance finding constant affirmation.

On 7th August, in what PTI’s support base portrayed as a ‘rebuke’ of India, the State Department tweeted that India had not consulted or informed the U.S. before its 5th August decision to annex J&K, contrary to media reports. The tweet did not censure India and did not contain, nor was followed by, a demand or request to reinstate J&K’s ‘autonomy’. The State Department, in fact, backed India’s claim that Kashmir was a ‘bilateral issue’, a notion Pakistan focuses heavily on countering.

While mildly criticizing the draconian lockdown imposed on J&K, the State Department’s general tone on India remains extremely positive, hailing various forms of bilateral economic and military cooperation and frequently assuring India that the U.S. shares its views on ‘terrorism’. Pakistan is still urged to work on preventing ‘terrorism’ against India and this pressure has not lessened after 5th August.

The State Department, at best, occasionally employed a ‘both sides’ narrative vis a vis security. It reiterated the American view that ‘terrorist groups’ act from Pakistani soil against the Indian occupation forces in Kashmir. Thus, Pakistan is still framed as the root problem. It is not just reprimanded for ‘terrorism’ but made to face down actual consequences (i.e. FATF) for it while India is neither threatened with actual consequences nor even reprimanded verbally.

Donald Trump’s half-hearted offers to ‘mediate’ between India and Pakistan predictably led nowhere and have likely been forgotten in Washington itself. Yet, it was hailed as one of the fruitful outcomes of Khan’s U.S. visit, the sale of $125 million worth of F-16s being the other. Despite it carrying no real practical weight and its only ‘benefit’ being that it irked India somewhat, Trump’s ‘offer’ was presented as signs that PTI was ‘internationalizing’ Kashmir.

The PTI is not unaware of the multifaceted, institutionalized and geo-strategically active Indo-US alliance in the region. What factors, or moves from Pakistan, could possibly outweigh it and make the U.S. lessen its pro-India preference? Pakistan’s role in facilitating the never-ending Afghan peace talks is sometimes suggested as the ‘trump card’ Pakistan might use to entice the U.S. into acting as a responsible broker in the Kashmir dispute.

The U.S. has clearly not reciprocated and continues to back India. However, Pakistan has not emphasized a potential abandoning of support to the peace process if the U.S. does not pressurize India on Kashmir. Barring a one-off statement before 5th August, Pakistan has not threatened to cease pressurizing the Taliban to the talks (if indeed that is what it does) if India does not face practical pressure from the U.S.

This is, of course, assuming the peace talks are indeed intended by the United States to yield peace and precipitate its departure from Afghanistan. Many signs point toward this not being the case. Whether Pakistan abandoning its role in the process would even compel the Taliban to quit talks with the U.S. is also not a surety.

Pakistan has thus, despite full cognizance of the extent of Indo-U.S. strategic convergence, sustained continued focus on the U.S. and tried to play within the parameters the latter has set for Pakistan over the last few decades. It has sought to re-enter the limited space it found itself in during the Musharraf era, where reliance on the U.S. meant Pakistan could not challenge a regional status quo which benefited India at its expense. This adds a failure to learn from history to the shortcomings of the PTI’s current approach.

Pakistan, during the tumultuous early 2000s, did nothing to reduce the United States’ leverage as stakeholder in the Indo-Pak conflict, and paid the price for it with severely limited options versus an India with greatly expanded strategic options to damage Pakistan.

The U.S.-NATO presence in Afghanistan gave India room to sponsor and support Baloch separatists, and even extremist terrorists against Pakistan, causing a diversion of Pakistan’s military resources to secure its western front. The lack of U.S. scrutiny on India’s role in supporting terrorism, the complete focus on Kashmiri resistance groups’ alleged backing by Pakistan as ‘terrorism’, the U.S. media bias toward India, and a rapid Indo-U.S. strategic partnership which evolved from 2007 onwards, all portrayed a sad picture for Pakistan in terms of the U.S. role in the Indo-Pak conflict.

What has changed since then, to justify the PTI’s faith in the U.S. as a stakeholder for Kashmir? After all, the U.S. and India are closer than ever to each other. Why then, for the sake of escaping a status quo imposed by the U.S. whereby Pakistan is handicapped, has PTI not hedged its bets elsewhere? Relatively recent history dictates the need for Pakistan to force the idea of Kashmir as an international issue and India as the aggressor to stakeholders not themselves allied with India.

The PTI has evidently done the opposite of this. Even with the Indo-U.S. alliance demonstrably involved in weakening Pakistan and strengthening India, while it takes its criminal policies in Kashmir to new heights, Pakistan seems to not be getting the memo.

The FATF is correctly seen in Pakistan as a weapon of coercion wielded against it by the U.S. and India. A lot of stress is laid in meeting its requirements with regard to drafting new laws on counter-terror financing, which Pakistan has been doing, but there is no hint of PTI understanding the need to seek an end to constant FATF pressure since it in essence is a boon to India.

There have been no steps taken, before or after 5th August, in lieu of the extraordinary circumstances prevailing with India to make clear to the U.S. or the ‘international community’ that Pakistan will adopt drastic measures if FATF’s politicized targeting of Pakistan continues.

Pakistan could threaten to shut down the NATO transit route to Afghanistan should the FATF blacklist it, considering the FATF is assisting India’s criminal annexation of J&K by unjustly pressurizing Pakistan and enabling India in its plans to escalate to open war.

Numerous Indian officials have made this threat publicly. This makes it incrementally easier for Pakistan to use India’s annexation of J&K as a pretext to make clear it is ready to use such drastic measures to remove irritants such as the FATF from the equation. The U.S. would then be compelled into reconsidering whether partnering with India in the FATF fiasco yields results for its ‘contain-China’ partner in India that would make a logistical disaster in Afghanistan worth it.

It also helps that J&K’s annexation intruding upon territory claimed by China will make China a likely supporter of Pakistan’s in such endeavours.

Additionally, the U.S. would not have to bear any damage to the Indo-U.S. alliance by refraining from the use of hostile Indo-US initiatives against Pakistan, like the FATF, in consideration of the heightened tensions post-5th August. It would remain intact in the Indo-Pacific naval rivalry with China, India would continue gradually replacing the Russian monopoly over its defence imports with the U.S. and Israel, and India would not ‘punish’ the U.S. if it were to heed Pakistan’s warnings in any way.

A defensive threat against FATF coercion by Pakistan would raise the stakes and make unavoidably obvious to the U.S. – especially President Trump himself – that its partisanship in the Indo-Pak conflict is now not only extremely impractical but also a danger to its own interests in the region.

However, for this to take place, the PTI needs to first acknowledge the existence of that partisanship. It must abandon its ill-fated and baseless claims of bettering Pakistan’s position with the U.S. and the ‘world community’.

While not hinting at any practical steps Pakistan might take, PM Khan has even adopted a visibly tame, mild rhetoric on Kashmir; it incorporates an element of pandering to the ‘international community’ which, for PTI, clearly means the U.S. An example of this can be his numerous declarations that Pakistanis joining the resistance in J&K will be ‘the enemy’ and thus assuring everyone that Pakistan will not take measures drastic enough in confronting India.

The PTI clearly has no plan on Kashmir and by virtue of the resulting vacuum where its long-term strategy should be, it has fallen back on the traditional U.S.-centric worldview of Pakistan’s foreign policy establishment, despite this approach yielding it nothing at all.

Print PDFIn his 1961 classic entitled ‘Deterrence and Defense’, Glenn H. Snyder, while terming deterrence a function of the total cost-gain expectations argued that, “the aggressor’s estimate of costs and gains is a “whole war” […]

Print PDFThe growing diplomatic cooperation between Moscow and New Delhi cannot be separated from New Delhi’s apprehensions on Pakistan’s increasing role beyond its home region. The Indian Anti-Pakistani obsession in the regional and extra-regional affairs […]