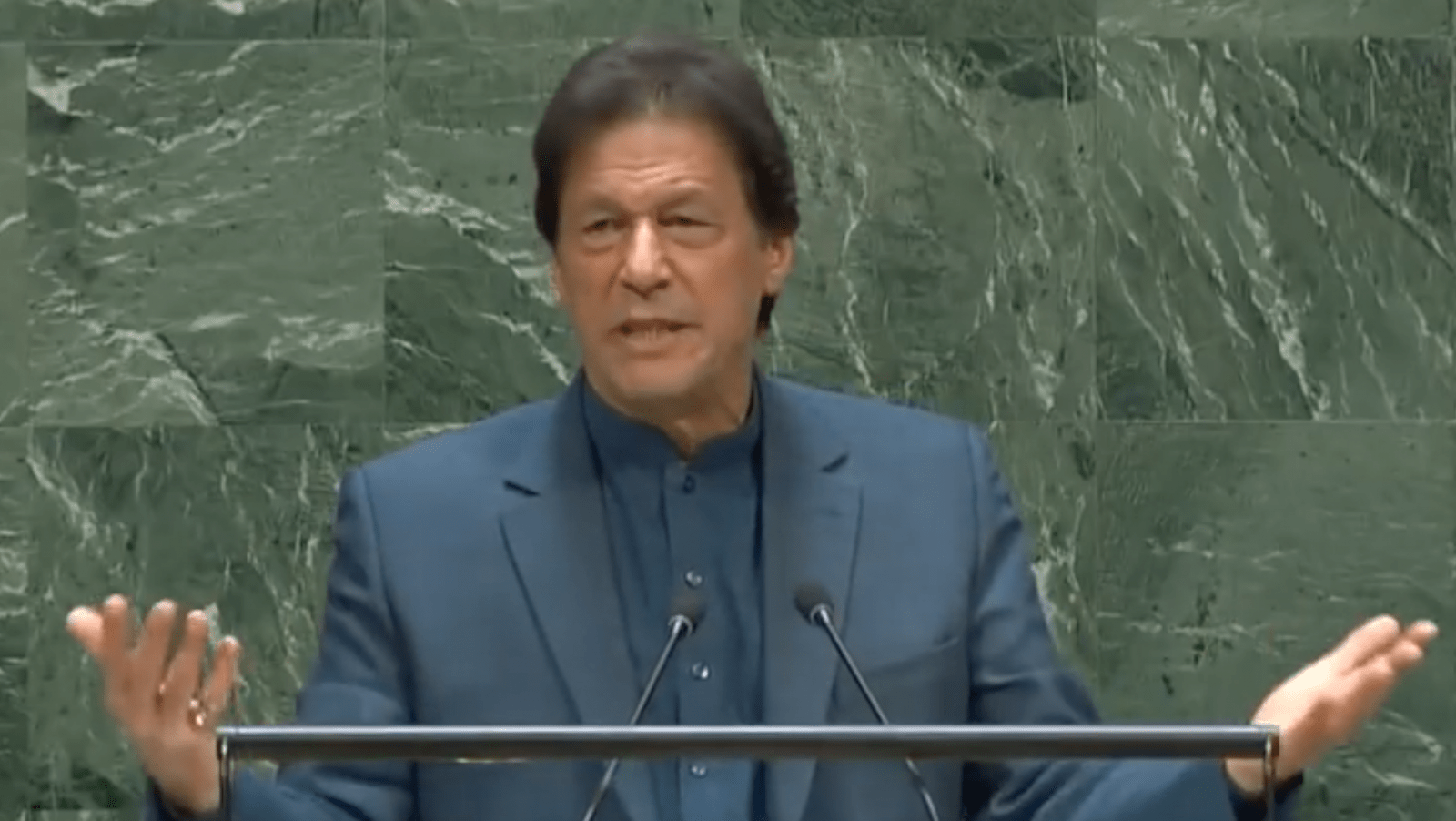 Hailed as a hero for calling out New Delhi’s draconian measures in occupied Kashmir, Imran Khan warned the world of a “bloodbath” once India lifts its lockdown of Jammu and Kashmir. He persuaded global leaders to denounce the brutalities and human rights violations unleashed on Kashmiris since the disruption of the decades-old status quo, which had been granted by the symbolic autonomy of Articles 370 and 35(A) within the Indian Constitution.  The constitutional coup d état ensured the alienation of the indigenous population in IOK to a point beyond redemption, and with massive spillover effects across the LOC. Pakistan is home to 4,045,366 self-governed and independent Kashmiris as per the 2017 census, who are desirous of more than political and diplomatic support for their brothers in IOK. India and Pakistan have already fought three wars over Kashmir.

Focusing on the brazen denial of core human values, Imran Khan prognosticated a more radicalized world as the scourge of radicalism finds more fodder in a discriminated society. If climate change is ignored, the clichés of religious affiliation continue and the inherent right of self-determination remains disregarded, then violent reaction is inevitable. He said, “we all know that marginalisation leads to radicalization… No one did research that before 9-11, the majority of suicide bombers in the world were Tamil Tigers. They were Hindus”, but Hindus rightly escaped the blame since belief and religion has nothing to do with committing acts of terror.

Imran Khan talked more like Gandhi than the nation of Gandhi itself. He reminded the world of the reincarnation of the pogrom and medieval periods ridden with racial and ethnic discrimination, when religion and state were inseparable. Now, this thinking resides more in inter-state relations while negatively stirring regional cooperation and globalization. Already in a state of deprivation, the fifth largest population of South Asia is fearfully seen as being on the brink of a nuclear war; Pakistan, a nuclear state seven times smaller than its neighbour, as very few options left and has already been driven to the wall. The speech was well received and touched a chord with many Kashmiris reeling under the unprecedented communications blackout and travel restrictions in place since 5th August.

“It felt like there is someone to watch our back. It felt that someone is talking for us, that we are not alone”, was the feeling commonly shared.  Hundreds of affected Kashmiri stakeholders came out of their homes, shouting slogans in support of Imran Khan and calling for the independence of Kashmir despite restrictions on movement and the deployment of additional force by India in Srinagar. A fresh charge sheet has also been filed by the National Investigation Agency (NIA) of India against the chief of Jammu & Kashmir Liberation Front, (JKLF) Yasin Malik, and other leaders including Asiya Andrabi, and Masarat Alam on 4th October 2019.

Conjuring up his dystopian vision, Prime Minister Modi made no mention of the disputed region of Kashmir in his read-out speech at the UN, along the lines of a diplomatically bureaucratic explanation. He only checked the fanciful boxes of development, progress, world peace, annihilation of terrorism and protection of environment. This speech, however, was soon followed by a threat from his own government’s defence minister calling for the liberation of Pakistani Administered Kashmir as the next step in India’s quest for regional dominance.

Moreover, Imran Khan also expressed his fears in his erstwhile meetings with Donald Trump, Angela Merkel, Emmanuel Macron and Boris Johnson on the sidelines of the General Assembly session. Trump has offered mediation, but only if both Pakistan and India agree. A senior US diplomat for South Asia called for a lowering of rhetoric between India and Pakistan, while saying that Washington hoped to see rapid action by India to lift the restrictions it has imposed in Kashmir and the release of detainees there. Similarly, State Councilor and Foreign Minister of China, Wang Yi, in his address to the General Assembly on 27th September stated; “The Kashmir issue, a dispute left from the past, should be peacefully and properly addressed in accordance with the UN Charter, Security Council resolutions and bilateral agreements.”

Nonetheless, an arrogant denial by India of Pakistan’s stance on Kashmir by Turkey and Malaysia is more of an inept understanding of diplomacy and international commitment. India needs to step out of the skeptical comprehension of the role of the UN that was pronounced by Ms. Vidisha Maitra at the UN. The sway of diplomatic terms and preconceived historical interpretations could be misguiding for political leaders. Modi needs to keep his ears close to the ground to save his political future.

For Kashmiris, it is an extensional battle. No concertina wire can blur the contradiction in his approach to the issue. “When they are in India they say it is an internal issue and when they are on the international forums, they consider it a bilateral issue,” said a resident of Srinagar. Confusion exacerbates the fear, which consequently becomes a forerunner to terrorism. The same goes for the United States whose potential role as a mediator does not seem to align with Trump’s close alliance with Modi in pursuit of his Asia-Pacific policy.

While Imran Khan continues to exercise his political and diplomatic influence proactively, to mobilize both the international community and his own people, the anti-India feeling, the pro-militancy sensitivity and the general sense of despair is all stronger than before in Kashmir.

Print PDFRecently a new arms control paradigm was proposed. The tenets of this proposition centre around two arguments. First, how much is too much? Second, what kind of changes in size of arsenal, types of […]

Print PDFThe Indian quest of possessing a nuclear triad has remained entrenched in its military doctrine. Beginning in the 1970s, the Indian nuclear submarine programme shortly gained momentum after the induction of Skat (Charlie-class) nuclear-powered […]

Print PDFAccording to media reports, India began deployment of the first battery of the S-400 aerial defence system acquired from Russia towards the end of December 2021 in Punjab, most likely in Jalandar, close to […]