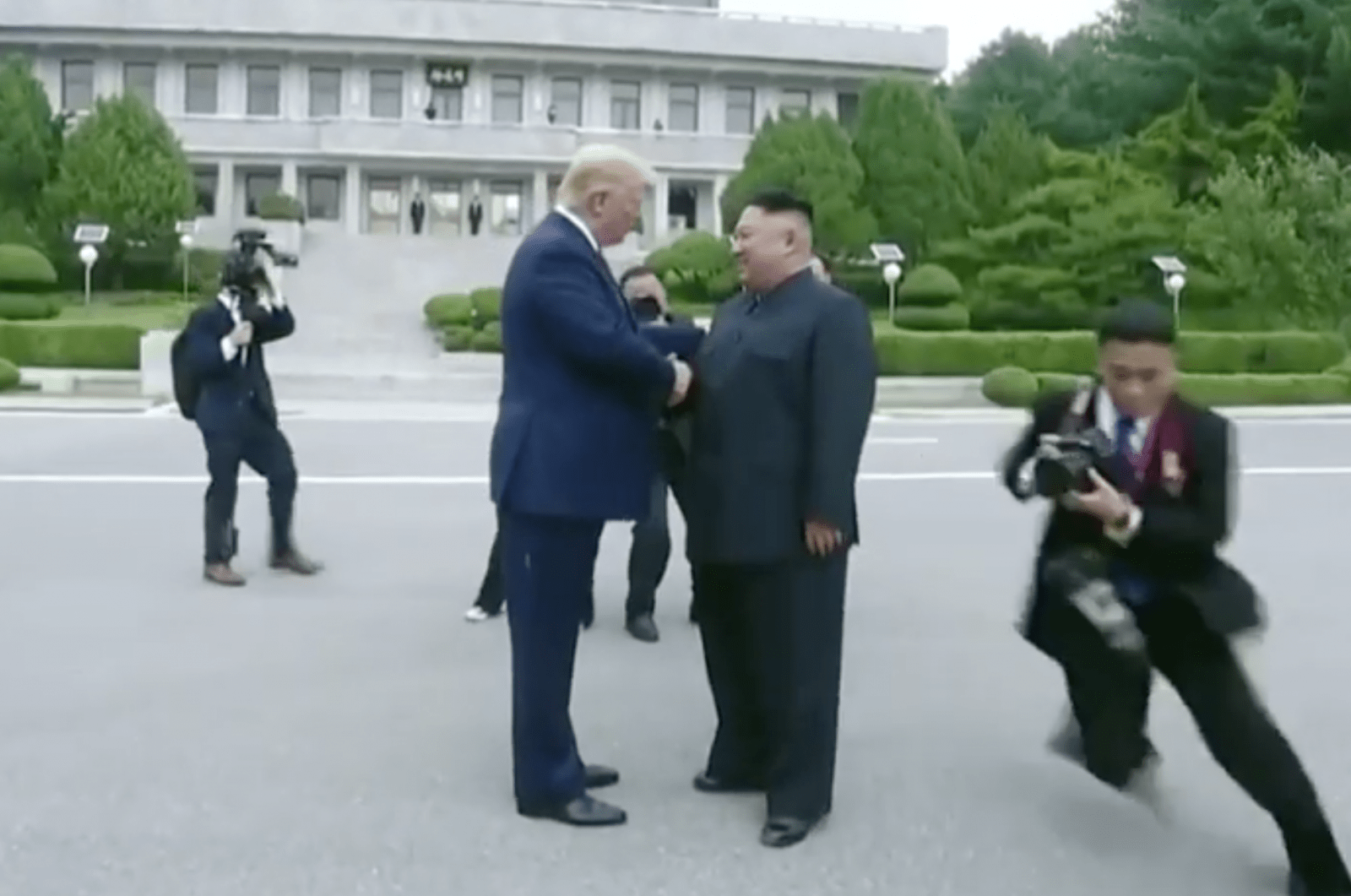 On Sunday, 29th June, while attending the G-20 summit in Osaka, President Donald Trump tweeted: “If Chairman Kim of North Korea sees this, I would meet him at the Border/DMZ just to shake his hand and say Hello (?)!”. In less than 48 hours, Trump became the first sitting American President to step into North Korea. He shook hands with Kim over the concrete slabs that divide the two Koreas as both the leaders agreed to recommence the dialogue for the denuclearization of the Korean Peninsula. National Security advisor John Bolton, who is known to be very averse towards North Korea and had previously convinced Trump to take a strong position in the Hanoi summit (demanding nothing less than absolute denuclearization), was also absent from the scene which further raised the optimism for the summit.

Rolling back or at least capping the North Korean nuclear program is a strenuous task, but not an unfeasible one. Both Trump and Kim Jong-un want to chalk out a nuclear deal at this time. Trump could stamp it as a magnanimous political victory which could be sellable in the upcoming elections. Likewise, Kim could align his country towards economic stability and avert the economic meltdown that the country is facing at the moment, the North Korean economy has shrunk by half in the preceding year due to economic sanctions. In addition, he could further safeguard and augment his leadership via the diplomatic process. For this objective, prior to the summit, Kim met with Chinese and Russian leaders and indicated his desire to resume dialogue with Trump. Another motive of these meetings was to dispatch the message that North Korea is not isolated as many envision it to be; instead, it has the buttress of two major powers and is not solely relying on Washington.

In the earlier Singapore summit, both leaders agreed to ease relations before proceeding towards dialogue regarding denuclearization. This might be the stimulus for Trump to execute a new strategy to tackle an issue which has haunted the previous presidents. The President has resorted to a “make friends policy” with Kim by exchanges of letters and symbolic meetings.

Even though both leaders enjoyed the optics and symbolism of a historic summit, a deal cannot be solely reached by their endeavours; instead, it requires protracted, diligent work from the representatives of both sides which may take weeks to months. Furthermore, the path towards a potential nuclear deal would be encompassed with a number of compromises from both sides. Neither Trump should anticipate North Korea doing away with their nuclear weapons right away, nor should Kim await the immediate relief of all international sanctions. Both of these processes will take considerable time.

The Hanoi summit was unable to materialize an agreement as Kim’s plea for major sanctions relief in return for dismantling nuclear materials-making complexes while leaving the existing stockpiles intact, was not accepted by President Trump. Interestingly, the New York Times has reported that the Trump administration is eyeing a new idea of freezing the North Korean nuclear program, i.e. capping stockpiles which are in existence and accepting North Korea as a nuclear power just as an interim setup while eliminating its capabilities to produce more nuclear weapons. This new deal would encompass the dismantling of all the uranium and plutonium enrichment sites in return for lifting some of the sanctions. Although John Bolton has dismissed the news, this development sounds more pragmatic rather than the maximalist approach of eradicating all nuclear weapons simultaneously.

The recent summit gave rise to a lot of criticism from many in Washington, who based their arguments on the notion that no working level talks followed the summit. Former Vice President, Joe Biden tweeted, “Not one missile or nuclear weapon has been destroyed, not one inspector is on the ground. If anything, the situation has gotten worse. North Korea has continued to churn out fissile material and is no longer an isolated pariah on the world stage”.

What is being ignored is that this summit was crucial in getting the talks back on track. Moreover, North Korea had resumed the firing of short-range missiles, indicating that it would soon resume testing of Inter-Continental Ballistic missiles. Hence, this looming threat cannot be pushed aside by demonstrating an ignorant attitude.

To say that the summit did not materialize anything concrete enough to celebrate ignores the demonstration of how leaders can break the impasse on critical issues in such a short time. Moreover, such gestures serve the purpose of roping in leaders in the diplomatic process rather than proceeding for war. The leaders agreed to resume talks through their representatives, a step which could have been gruelling without both leaders communicating directly.

As far as the legitimization of regime is concerned, history itself is evidence of how the U.S. has sought assistance from and vindicated repressive regimes itself. In the 1950s, the U.S. backed Syngman Rhee who became the leader of South Korea and was involved in the execution of 100,000 civilians who had communist leanings. Given that the U.S. has resorted to such regimes for securing vital interests, proliferation is itself an extremely pressing issue for international security. Consequently, the nature of the regime shouldn’t become a conflicting point in this regard.

There are minor chances that North Korea would eliminate its nuclear program wholly, as Kim has seen the fate of Muammar Gaddafi and Saddam Hussein and would not putting his regime at risk. Moreover, North Korea acquired its nuclear program as it dreaded hostility from the American side. Ergo, the U.S., instead of expecting immediate denuclearization, should galvanize efforts to alter the nature of relations both countries have experienced in the past. Transforming and easing relations can precipitate denuclearization as a by-product.

Despite the improving affinity of both leaders, the fact remains that the relations between the two countries still remain tense. Moreover, allegations are being raised that Trump is somehow legitimizing the brutal regime of Kim Jong Un. Similarly, there is no assurance that North Korea will not proceed towards defiance. All of these claims are not delusional and are somewhat more of a realist approach towards the issue. However, if the negotiation process is stalled or halted, then it can result in the vertical proliferation of the stockpiles. “Strategic Patience”  was a policy pursued by the Obama administration which conditioned negotiations on the notion that North Korea would do away with its defiant and provocative behaviour. This was a strategic blunder as it leads to further testing and uranium enrichment by the Kim regime. Delaying the talks will only make things more complicated.

Trump may not succeed in absolute denuclearization, the stance which he and his administration have been so firm about. However, he can avert the prospects of a potential conflict and transform the situation in a manner which precludes North Korea from being a core concern for the U.S. Kim, on the other hand, perceives Trump as the only President who can bestow upon him a lot more than what they can achieve from any other American President. Hence, they might want to grab the maximum they can attain before a new president steps in. Cognizant of the fact that deals often get scrapped by incoming presidents, the next few months will be critical as Kim would attempt to materialize some immediate incentives.

The South Korean President, Moon Jae-in spoke favourably about the meeting, pointing towards a cessation of hostile relations and the emergence of a new era of peace; he declared it to be “the fruits of amazing imagination”. Moon has been a staunch supporter of a peaceful settlement of the nuclear issue and has endeavoured to set up platforms where Kim and Trump can settle the issue. Since 2017, Moon has met Kim three times at the DMZ village called Panmunjom to discuss the issue.

Lastly, an agreement on forestalling enrichment of fissile material might be the most useful option as it would curtail capabilities towards proliferation and demonstrate a serious commitment towards denuclearization. This should be coupled with circumventing any hostile threats and gradually lifting sanctions. North Korea is a unique country, and the dynamics of diplomacy are very different, yet interestingly aware of the nature of Trump and Kim. Trump has applied a hawkish policy with Iran with the abandonment of JCPOA. It is yet to be seen whether Trump’s unconventional approach towards North Korea can formalize a deal or not.

Print PDF Strategic features in maritime domain can be classified by position, strength and resources Alfred T. Mahan South China Sea has all the characteristics to be called a strategic waterway. It extends from the […]

Print PDF “The changing security dynamics in the South Asian region and nuclearization of the Indian Ocean, calls for greater scrutiny in maritime policies both at the national and regional level.”   South Asia is […]