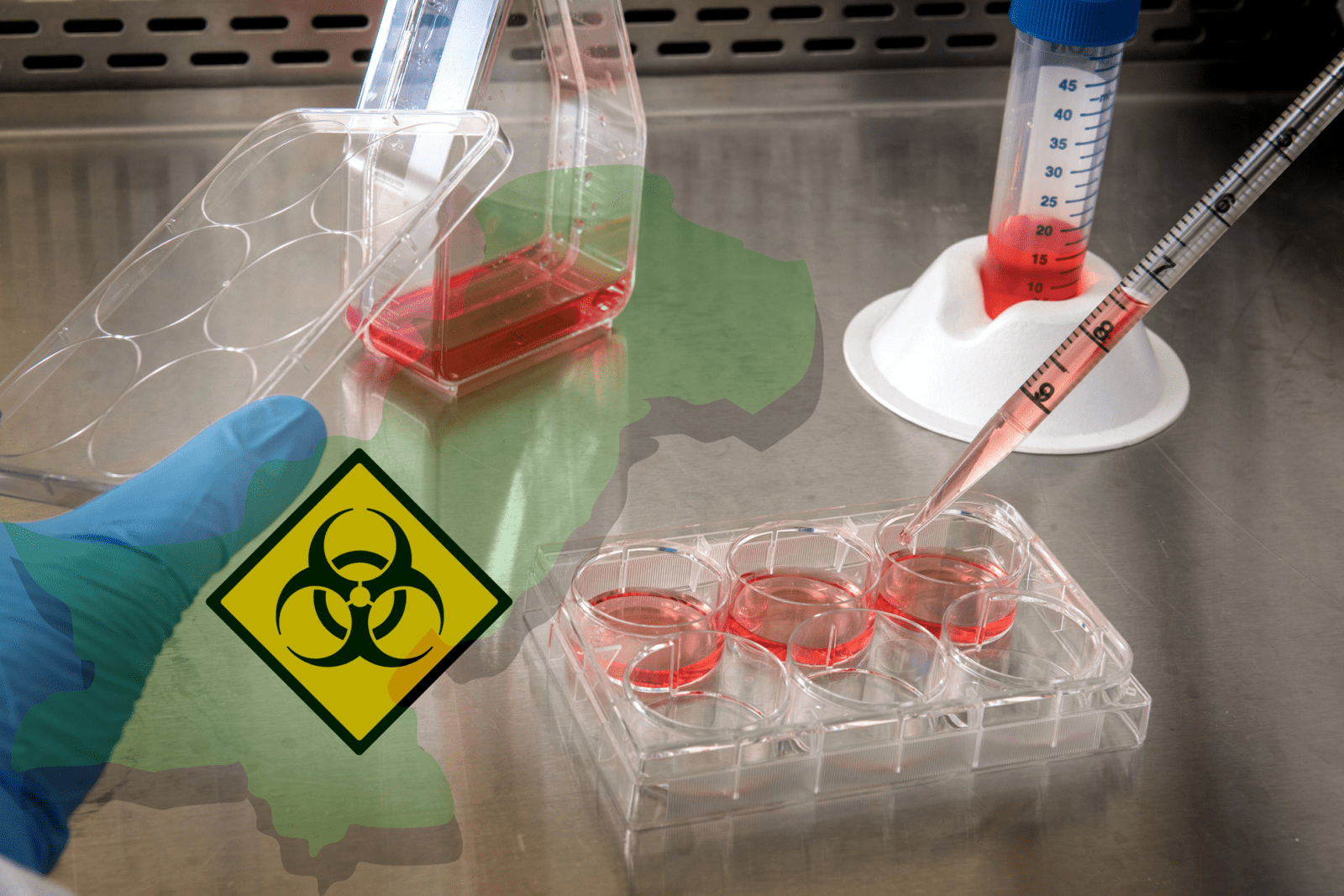 Recent academic debate has seen an increased focus on biosafety, the implementation of which is essential as dual-use biological research increases day by day. Given the potential for misuse, it is important to control this beneficial research, by implementing biosecurity rules and regulations. Biosecurity in Pakistan has been emphasized from time to time by preparing rules and regulations for local implementation, such as the implementation of export control laws according to UNSC Resolution 1540. The Coronavirus pandemic has shown a lot of deficiencies in developed as well as developing countries. In Pakistan, a biosecurity system was not present and had not even been thought of. Pakistan’s lack of effort, over the years, in taking any serious biosecurity steps in this direction became very obvious in the light of recent global outbreak. In this paper, I discuss the steps needed for implementation in this regard and the lessons learned, in order to assist policymakers in fighting any future endemics or pandemic.

Biosecurity is a strategic and integrated approach to provide policies and practices for preventing the intentional release of biological materials or the acquisition of knowledge, tools, or techniques. As a whole, biosecurity helps identify gaps in the regulations.  Biosecurity preparation, early detection and planning are essential for public health. Bioterrorism involves disaster, civil unrest and deaths, and preparedness appears to be the most potent defence against any bioterrorist attack1. The pathogens are found in nature but sometimes they could alter or increase their ability to resistance to current medicine.

On December 31, 2019, China informed the WHO about unusual pneumonia in the industrial port city of Wuhan in Hebei province, China, a city with a population of more than 20 million. Initially believed to have originated from the Huanan seafood market, known for its sale of exotic wildlife for human consumption, the infected number of people began growing at an alarming rate. On January 7, officials announced they had identified a new virus, and its first casualty, a 61-year-old man, was announced on January 11. Less than a week later the first case outside China was reported in Thailand by the WHO, of a woman who had travelled from Wuhan. On January 20, Chinese experts on infectious disease confirmed human to human transmission on CCTV. On January 23, Wuhan was placed under effective quarantine and all travel, both within the city and intercity, was suspended3. Later the same month, Asian countries began taking measures to block the spread of the virus, introducing mandatory screening at airports of all the arrivals from China and on January 30, the WHO declared a global emergency. In the days and week that followed, reports of cases began coming in from across Asia, Europe and America.

The virus, named nCoV-2019, was found to belong to the coronavirus family of SARS and MERS, and was designated as Covid-19 on February 14 by the WHO. On February 19, Iran reported its first case of infection and a few days later, several countries closed their borders as the country’s infections began increasing rapidly with a high death ratio. On February 26, Pakistan reported its first case of coronavirus, traced to an influx of travellers returning from Taftan. Despite knowing the cause, Pakistan was unable to take action to stop the passage due to a lack of awareness and preparation to handle such a situation. For the same reasons, our response in addressing the issue properly has taken time. To date, the number of cases has increased to over 10,500 with more than 224 deaths.

The WHO has called on Southeast Asia to take “aggressive” action to combat the coronavirus, warning that some countries were heading towards community transmission, which could overwhelm already weak public healthcare systems in developing countries such as Pakistan5.

To deal with the scenario National Command Centre Pakistan announced many steps such as the closure of educational institutes, bans on public gathering and a complete shutdown of borders with Iran on March 16; however, these steps were already 10 days late. A national coordination committee was also announced to control the disease. Owing to our state of preparedness, the lack of it, we have been unable to prevent the spread of the virus to our major cities.

Developed countries have made use of their Strategic National Stockpiles against the intentional and non-intentional use of pathogenic strains or viruses. We have to ask the question, “Does Pakistan have any biosecurity planning and preparedness?” The answer to this is “No”.  In a lecture delivered at the National Institute of Health on October 10, 2018, on Biological Terrorism, Emerging Infectious Disease and National Security5, this author recommended biosecurity planning and emergency preparedness such as development of early warning system throughout the country, an efficient detecting and reporting system and improved national capability for the future as a requirement to fight against emerging infectious diseases such as Anthrax, Ebola, Smallpox, Zika and coronavirus, of which newer and more resistant strains are reported from time to time5.

Those recommended measures were examined recently by the international panel under Global Health Security (GHS).  The GHS took a comprehensive study of health security and response in 195 countries, assessed the infectious disease outbreaks and measured the response capabilities of each country. They have quantified the following six capabilities of the member states and evaluated them asunder.

Even the United States was able to score only 83 out of 100 points, showing that health security around the world is very weak and no country is adequately prepared for epidemics or pandemics.  The average score was only 40 out of 100. Pakistan ranks 154 among 195 countries in terms of quality and accessibility of healthcare, behind its South Asian counterparts Bangladesh, India and Sri Lanka6. Pakistan’s preparedness is very weak, and capacities have not been tested. Funding and budgets are inadequate. Training and coordination are lacking along with foundational health systems capacities for epidemic and pandemic response.

Unfortunately, the veracity of the GHS Index study is being borne out in real-time with the COVID-19 outbreak the world is experiencing now. But there is no time to point fingers and say “I told you so.”  We need to act fast, efficiently and furiously.

At this writing, we are about four months into the COVID-19 outbreak. The WHO officially declared it a pandemic on March 11, 2020. The  countries initially experiencing the greatest number of cases included China, Iran, Italy, and the Republic of Korea7. It is amazing that with the time today on April 12, the country which ranked first on the GHS Index is suffering the most numbers of confirmed infections and deaths7. While biosecurity services are available, these numbers may be attributed to other reasons such as not implementing the quarantine facilities on time.

To date, COVID-19 is reported to have spread across 205 countries and regions; more than 2,733,000 people are infected, 191,470 have died and 751,000 people had recovered7. While initially the most vulnerable were reported to be those above 65 years of age and/or with pre-existing medical conditions, an increasing number of younger patients and fatalities have been reported in the last several weeks across all countries. Therefore, we need to take immediate and serious actions to: first, protect ourselves, family, loved ones, and others in our communities; second, act to contain the spread by preparing our homes, workplaces, and businesses and third to control the food supply chain.

Biological weapons, comprised of micro-organisms, viruses and natural toxins that produce disease in humans, animals and plants, are considered to be the deadliest weapons ever produced. The potential danger of a given bioweapon is measured by its lethality, infectivity and its virulence. Other important considerations include the possibility or probability of medical treatment and existence or otherwise of immunization vaccines.

Pakistan signed the Biological Weapons Convention in 1972 and ratified it in 1974. Pakistan adheres to its obligations as a signatory, as demonstrated by its participation in all the review and technical committee meetings of Experts to the Convention on the Prohibition of the Development, Production and Stockpiling of Bacteriological (Biological) and Toxin Weapons and on Their Destruction, and with the presentation of its Efforts on Development Code of Conducts8 in 2003 and the development of an Early Warning System9 in 2004. In the 5th review committee in 2005, Ambassador Masood Khan, Pakistan’s Permanent Representative to Geneva, mentioned that Pakistan had adopted many measures for the protection of human beings, animals and plants10.

While Pakistan was able to adopt some biosafety procedures, it was unable to progress on biosecurity measures, especially in the direction of control of infectious diseases and the facilities to handle an outbreak.

The Pakistani government needs to invest in the discipline of biosecurity. It should be made part of the essential education and training of health workers and physicians.  Scientists (Biochemist, microbiologists, biotechnologists and genetic engineers) should be made familiar with state-of- the-art investigation procedures, as well as innovative technologies of control and efficient detection of microorganisms and viruses to implement biosafety and biosecurity procedures11. We have to prepare our nation against chemical and biological threats and learn from our the experience we are gaining with the COVID-19 pandemic.  The State should pass biosecurity laws,  which are pending for the last 10 years, so we can develop a system to address biosecurity challenges in the future and build confidence in our nation.

About Dr. Syed Javaid Khurshid 4 Articles
The author is a Senior Research Fellow at the Center for International Strategic Studies (CISS), Islamabad and expert on Weapons of Mass Destruction.