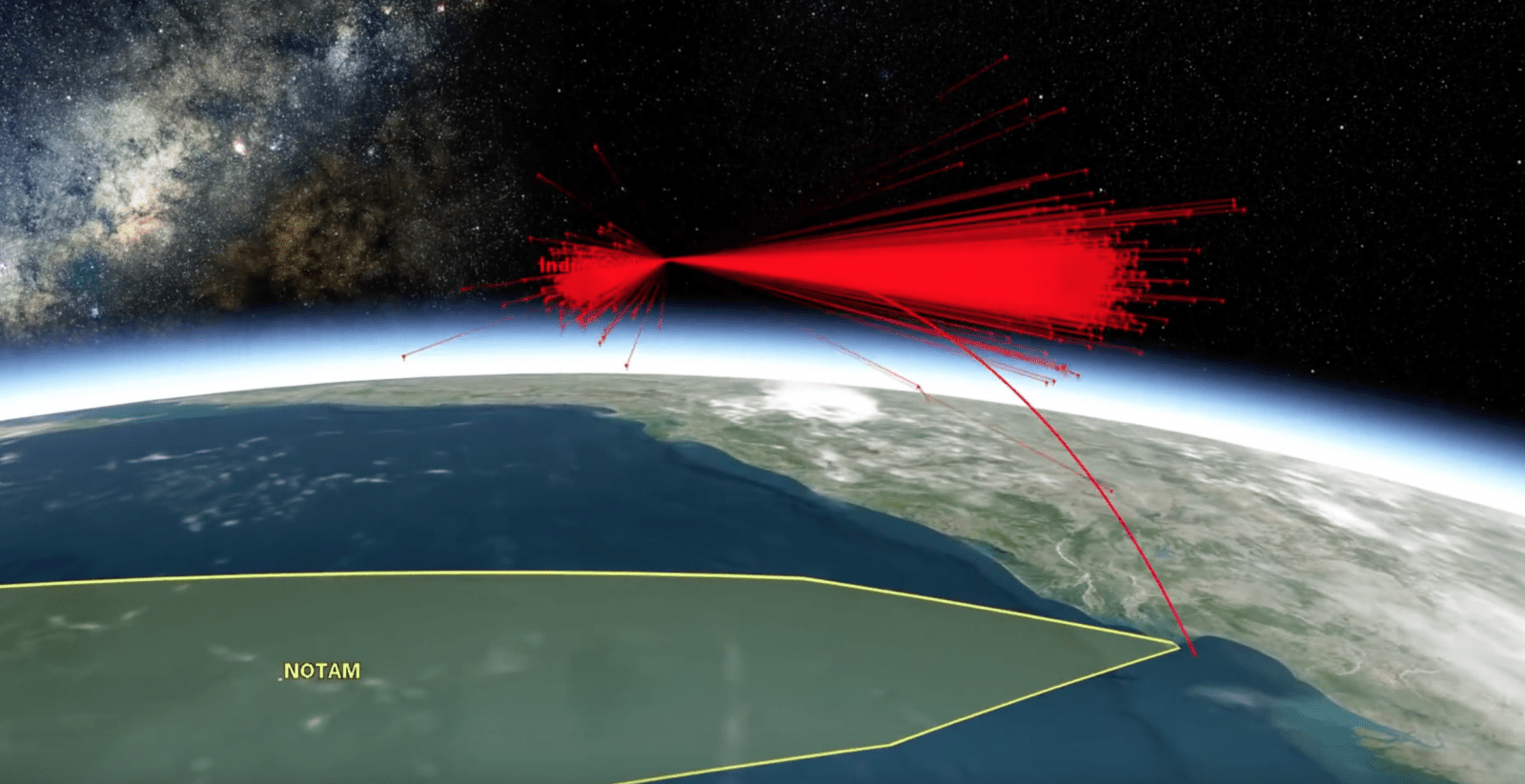 Many of us might remember the 2013 film Gravity by Director Alfonso Cuaron starring Sandra Bullock and George Clooney. While it was less of a film containing the story of space survival and more of an experience to watch because of its realistic space effects; the film also silently conveyed few important messages for the general public: the importance of space security, dangers of space debris, and most importantly the need for responsible behaviour in outer space.

Outer space, like oceans and seas, is a global common, i.e. it is a common heritage of mankind, free from territorial demarcations down below. Ideally, it is supposed to be free from all conflicts and wars between clans, nations, and states; which, humanity has been witnessing since its advent. Although there were strong trends of ‘militarization of space’ in both USA and USSR in the first decade of the space-age; however, measures like Outer Space Treaty, Moon Agreement, Strategic Arms Limitation Talks (SALT-I and -II) etc. receded the military usage of space and opened up avenues for its socio-commercial utilization aimed at the greater benefit of a common man. The result is that the modern-day living is highly dependent on technologies based in space or services passing through space.

Thus, by and large; we can say that space has been used for peaceful purposes as nations have been showing restraint and acting responsibly in the medium of space. Especially in this century, more and more nations continued to field their satellites in space without worrying for space debris or space weapons; although the three superpowers (i.e. USA, Russia and lately China) had Anti Satellite (ASAT) capabilities.

On 27 Mar 19, Prime Minister Modi proudly announced the attainment of ASAT weapon capability as the Indian Defense Research and Development Organization (DRDO) missile destroyed one of the country’s own military satellites in ~300 km high orbit. Dubbed as “surgical strike in space”, it was more of a direct cover-up of the failure of Indian Air Force (IAF) to perform against much smaller air force. In other words, after failing to bully Pakistan, the BJP’s election campaign made use of creating an issue of outer space insecurity. The aforesaid notion was reflected in criticism at the international front as well as in domestic circles in India (for instance by Rahul Gandhi, Chief Minister of Bengal Mamata Banerjee, etc.).

The test also brings the ethical values and real aims of Indian Space Research Organization (ISRO) as well as its political masters in question. India initiated its space program for socio-economic development and had been resisting military applications until the end of the last century. This approach (of the civilian space program) directly benefited India in the form of “access to advanced technologies” through international collaboration.

Thus, in the present century, as ISRO worked to garner a commercially viable, largest civilian space program in the world; DRDO continued to tap benefits in the form of ballistic and hypersonic missiles, anti-ballistic missiles, and the ASAT weapons. The aforesaid approach is analogous to the “peaceful nuclear explosion” in 1974 and depicts precedence of obtaining sensitive technologies in name of civilian use and then diverting them towards the creation of offensive military capabilities.

From the perspective of strategic studies, it is worth mentioning that satellites are directly related to strategic stability; legalized as “national technical means of verification” in SALT. Destroying a satellite is highly provocative as it interferes in the ability of a country to detect a nuclear strike. Thus, ASAT can have direct consequences in escalating towards nuclear war.

The nature of space security trilemma between Chia-India-Pakistan is quite different from its terrestrial dimension.  There is a considerable imbalance of power between China and India whereas the presence of the rest of the neighbours of India in space is insignificant. Against whom Indians are intending to fight in the medium of space, remains beyond logical comprehension. Thus, the space facilities of India need to be monitored through international agencies to obviate problems for the international community in space.

While ASAT may still be a new word for many of Pakistanis, the fact is that the drive for ASAT capability was not new in India. The development of “weapons platforms for space” by Aerospace Command of Indian Air Force (and not by DRDO or ISRO) was announced by the then Chief of Air Staff of IAF, ACM Srinivasapuram Krishnaswamy in 2004; three years before Chinese ASAT test. After the Chinese ASAT weapon test in 2007, pressure mounted from civil and military circles in India for demonstration of similar capability.

In 2010, the Indian Ministry of Defence also declared to develop hard and soft kill ASAT capability for destruction of satellites in its “Technology Perspective and Capability Roadmap” document. In 2011, the Institute for Defence Studies and Analyses (IDSA) held a conference in New Delhi to deliberate on issues of space security where the speakers unanimously agreed for ASAT test by India. The presented papers were published under the title of “Space Security: Need for Global Convergence” in 2012. In the present decade; the threat, doctrine and policy-related aspects of (Indian) space were regularly appearing in literature and the facets of counter space operations, in an overall offensive posture, conspicuously formed part of the solution to many of these discussions and proposals. Thus, the capabilities achieved over time were duly utilized by BJP as a desperate, face-saving measure to garner political support in the 2019 general elections. The aforesaid approach also highlights the placement of sensitive technology in hands of the BJP government; who, for their own election campaign, first resorted to an unnecessary military action, and then went on to create a space security dilemma to cover up its failures.

This event will have global implications; it was not just another routine test of a ballistic missile or a surface to air missile in territorial airspace. This test, although a technology demonstrator even in its primitive form has been carried out by a developing country having more than half of its population living well below the poverty line. It clearly shows that days of “weapon-free space” are over and “space insecurity” is now a reality for all countries to worry for. Many states will now seriously consider incorporating defensive measures (of some degree) in their space programs, so as to ensure protection during crises or war. This event has also reinstated the need for incorporation of the domain of space into tactical and operational calculus of militaries. Thus, along with increased involvement of the military in otherwise civilian space programs, it will be entailing additional economic implications as well. This one irresponsible act for winning elections may also lead to curtailing of collaboration (particularly in the pretext of dual-use of space technologies) at global level, thus affecting the growth of space programs of technologically inferior nations.

Lastly, what is the effect on Pakistan and what should we do? The answers lie towards developing a prior understanding of counter-space operations. While this whole development was lightly taken in Pakistan, not even being reported by some of print and electronic media, the fact remains that the aforesaid questions are very important requiring thorough deliberation at all levels. All the more, there remains a need to react in a careful, well-deliberated manner that can ensure protection without affecting the growth of our space program.

This article is based on his research work titled “Counterspace Operations and Nascent Space Powers”, published in 2018 in the International Journal of Space Politics & Policy.

Print PDFWhile COVID-19, the deadly Pandemic has unravelled the socio-economic foundations and norms of the international community not much has been said about the complications it has created for the militaries around the world. Military […]

Print PDFIn recent ages, no international maritime dispute has garnered more attention than the contest over the islands, reefs and waters of the South China Sea. The South China Sea is not only a strategic […]

Print PDFOn 22 May, Washington Post reported that the U.S. was considering resumption of nuclear testing, after having had its last test in 1992. The stimulus can be traced back to a Compliance Report issued […]