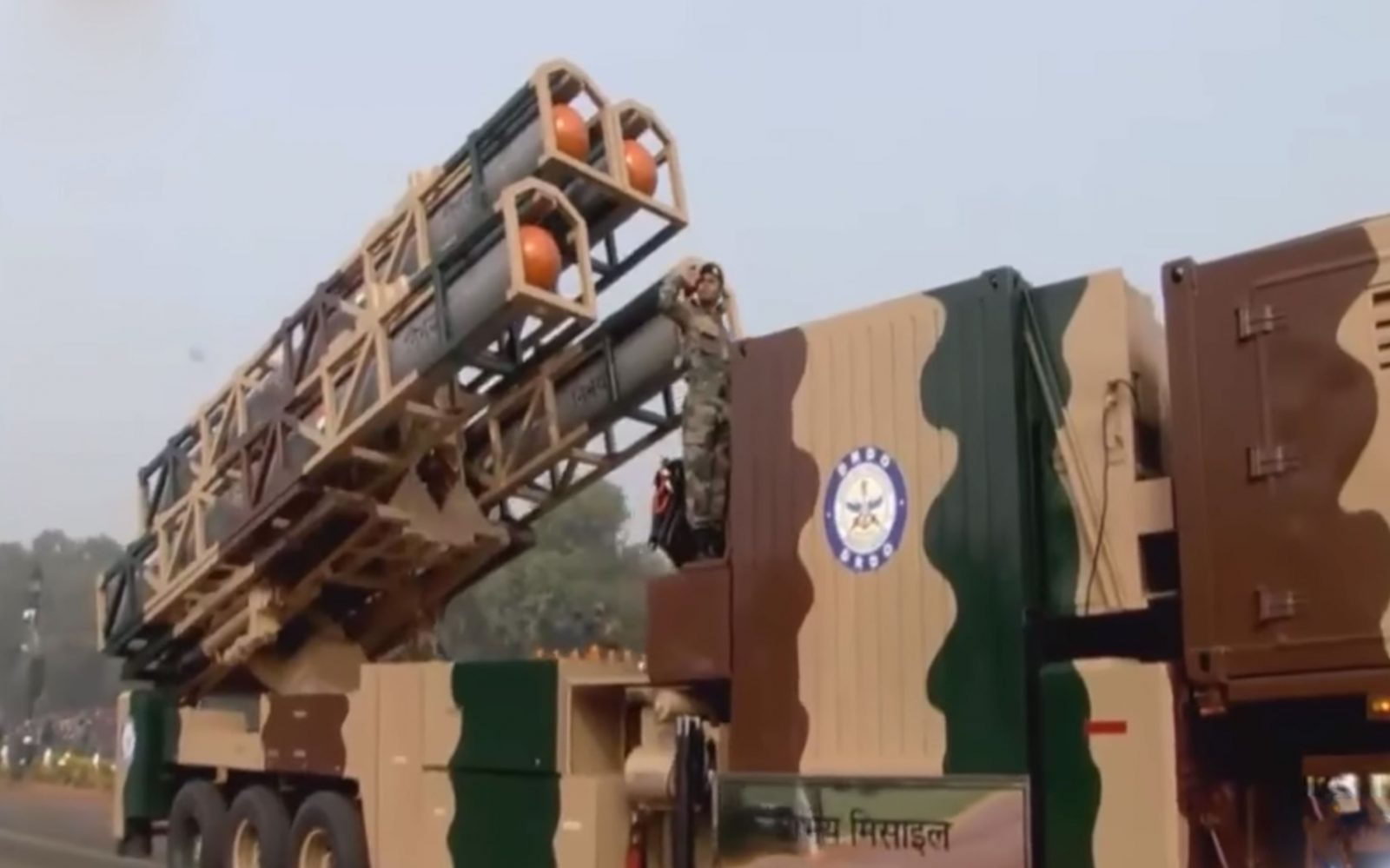 India has always desired to dominate the South Asian region and become one of the major powers in the world. In pursuit of its long term regional and global hegemonic designs, India is involved in several missiles development programs. On 15th April  2019, it carried out a successful test of its indigenously developed long-range subsonic stealth cruise missile ‘Nirbhay’, which is capable of reaching its target with a speed of Mach 0.7 and flying at an altitude of 100 meters.

The Defence Research and Development Organization (DRDO) has developed this missile with an operational range of 1,000 km and guided by the indigenously developed advanced inertial navigation system (INS), which enablesNirbhay to accurately hit the intended target. This missile is designed to carry nuclear or conventional warheads of 300 kg to 400 kg and can reach its the designated goal at a maximum operational range in 42 minutes and 23 seconds. According to the Indian Ministry of Defence, this trial test was conducted to “prove the repeatability of boost phase and cruise phase using waypoint navigation at very low altitudes”.

The Nirbhay cruise missile can fly at different altitudes ranging from 100 m to 4km above the ground, which decreases the chances of detection by the adversary radar system. The cruise missile has loitering ability, which means that it can go around a target and perform several manoeuvres and then re-engage the target. In other words, once the Nirbhay missile is above the target and is put on a ‘loiter’ pattern; this offers the option to consider whether a strike still needs to be carried out or not, and could also be destroyed through self-destruction mode.

Nirbhay also can enter deep into the adversary area and engage targets with high precision. The recent test is significant because it is the second successful test of Nirbhay after November 2017. India started the Nirbhay program in 2004 and projected its completion for 2016; this target, however, could not be met because of technological issues (missile’s flight control software and navigation system). Before 2017 test, four trial tests of Nirbhay were conducted but ended in failure.  With the above-mentioned capabilities, India can use Nirbhay to target military camps or intended targets in enemy territory with less chances of collateral damage.

This trial test has been conducted in an environment when tensions between India and Pakistan are high, in the aftermath of the Pulwama attack, and with the general elections for 2019 already having started in India. In the backdrop of the February 2019 military escalation between the two countries, the timing of this missile test is crucial. After four failed tests in 2013, 2014, 2015 and 2016, India has finally tested this missile with success, at a critical time which allows it to project its ambitions vis-à-vis Pakistan. Within this range, it is solely aimed to target specific areas inside Pakistan’s border if launched from the Indian border. The notion of preemption against Pakistan is a core element of the Indian Joint Armed Forces Doctrine of 2017 and the Land Warfare Doctrine of 2018. The Nirbhay missile is aimed towards a limited war against Pakistan. It can be launched from different platforms, i.e. aircraft, ground-based vehicles or launcher, ships or submarine. India is already on course to test an air-launched version of Nirbhay in 2 to 3 years’ time.

While Pakistan’s subsonic cruise missile (Babur) is compatible with India’s Nirbhay missile, this test will further exacerbate the ongoing crisis and enhance mistrust between the two nuclear-armed states. Moreover, this test is an addition in recent developments in India, i.e. the introduction of the anti-satellite ballistic missile, Electronic Management Intelligence Satellite’ EMISAT’, Dhanush Artillery gun. All these developments show that India is trying to further escalate the ongoing politico-military tensions with Pakistan. The Indian political elite, especially Prime Minister Modi, is using negative sentiment against Pakistan as a trump card to get maximum support in the general elections and form a government again. Not only is India working on the latest supersonic or hypersonic missile (BrahMos) but it also testing indigenously made subsonic missiles (Nirbhay) to fill the existing gap in the Indian armed forces warfighting capabilities. Furthermore, through this test, it is evident that India is willing to enhance its first strike capability vis-à-vis Pakistan, thus abandoning the ‘no first use’ (NFU) policy.

In the South Asian context, the historical rivalry between India and Pakistan has always played a crucial role in shaping the security dynamics of the region. Pakistan’s major security threats are inclined towards India due to India’s hegemonic approach. To overcome Indian conventional and unconventional threats, Pakistan’s nuclear and missile program is solely based on providing deterrence against India. Indian initiatives like Nirbhay can destabilize the strategic equilibrium of South Asia, encouraging an arms race in terms of cruise missiles between two hostile neighbours. This will discourage any peace initiative in the region.

The author is Research Associate at Strategic Vision Institute Islamabad.

The Temple Controversy: The State of Hindu Minority in Pakistan

Print PDFOn June 27, 2020, the Prime Minister of Pakistan, Imran Khan approved a grant of PKR 100 million for the construction of a Hindu temple in Islamabad. The decision was made after discussion with […]

Going up the Escalation Ladder yet again!