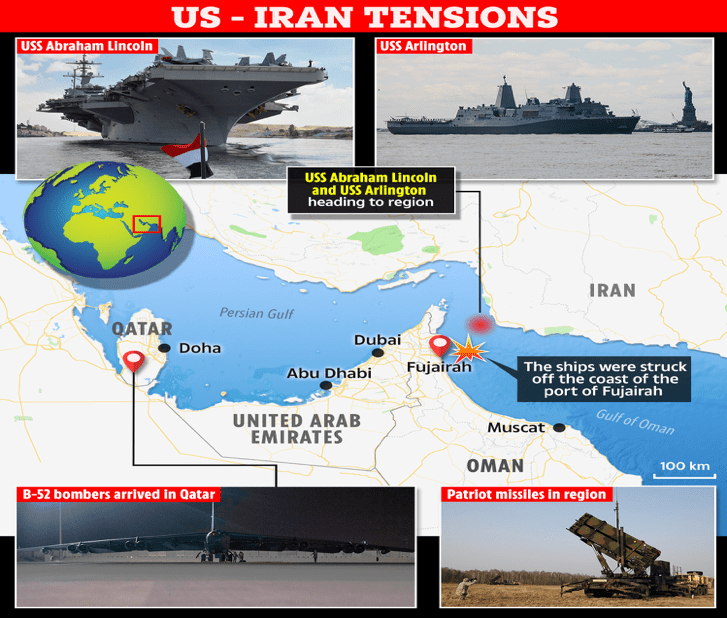 Iran and the U.S. have been engaged in renewed tension since the end of May 2019, when the latter began sending troops in the Persian Gulf. This was done to pressurise Iran on account of intelligence reports that it was planning attacks on U.S. forces in the Middle East. The U.S. sent its naval fleet including the USS Abraham Lincoln, an aircraft carrier, a Patriot missile battery and a squadron of B-52 bombers. Iran warned that it would retaliate if attacked. Amid these tensions, two Saudi Arabian oil tankers and a Norwegian ship were damaged on 12th May 12, 2019. Iran condemned the possible attack and claimed that these acts are “plots by ill-wishers to disrupt regional security.”

U.S.-Iran relations started deteriorating when President Donald Trump announced the U.S. withdrawal from the Joint Plan of Action (JCPOA), also known as Iranian Nuclear Deal, in May 2018 unilaterally; he stated that the deal “didn’t bring calm, it didn’t bring peace, and it never will.” The JCPOA was agreed to in July 2015 after a one and half years of concerted diplomatic efforts under the Obama administration in between Iran, the P5+1 and the EU.  Though the U.S. withdrew from the agreement, the deal remains intact between Iran and the remaining parties. However, Iran has indicated that it may increase its uranium enrichment and pull out from parts of its 2015 nuclear deal commitments. Iran’s partial withdrawal from the agreement may collapse the deal altogether if other contracting parties do not give concessions to Iran in the oil and banking sectors.

Iran has been suffering economically due to the U.S. imposed sanctions. President Rohani said that the sanctions are affecting the country worse than the 1980s during its war with Iraq. Foreign Minister Javed Zarif said that his country might exit from the Non-proliferation Treaty (NPT) due to tightening sanctions against it.

Iran’s national policy about nuclear proliferation is clear. It reiterates that they have no intention to develop nuclear weapons, and their nuclear program is for peaceful purposes. It is the same reason Iran has signed the NPT and JCPOA.

Ironically, the U.S. has been sending troops in the region as part of coercive diplomacy and threatening Iran. The latter has committed to fulfilling conditions under the JCPOA, which the U.S. pulled out of without any substantial justification. Conversely, the U.S. remains silent over the issue of Israel’s proliferation. Israel is considered to have nuclear weapons capability, yet officially adopts an opaque policy, i.e. it neither accepts nor denies nuclear weapons possession. Israel has never signed NPT and is the main hurdle for a Nuclear Weapon Free Zone in the region.

If the U.S. continues to adopt such double standards and pressurise Iran by sending its forces in the region, Iran may find justification to withdraw from the NPT under Article X, which states, a country may withdraw from the NPT citing existential threats to its national security, giving three months’ notice. If Iran withdraws from the NPT, it may be followed by other countries including the Gulf states; this would trigger the potential proliferation of nuclear weapons, and the responsibility for causing it would fall not on Iran, but the U.S.

It is imperative that the U.S. show restraint. Its coercive diplomacy did not work in the case of North Korea, nor will it work in case of Iran. The only way out would seem to be ensuring the survivability of the JCPOA.

Syed Adnan Athar Bukhari is Visiting PhD Candidate at School of Politics and IR at University of Leicester, UK. He can be reached at [email protected].

Print PDF First Published at http://pakistanpolitico.com Source: AFP Salma Malik Afghanistan once again lives up to its part-legend part-mythical reputation of unceremoniously ousting foreign invaders. Whether it was the documenting of the fatal siege of […]