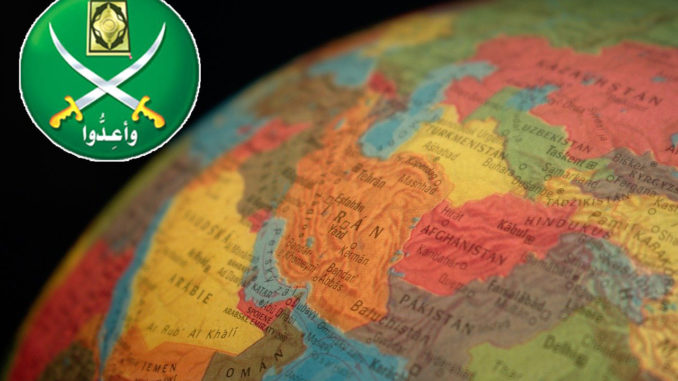 As we observe and critically analyze the Middle East and North Africa, we notice some strange but businesslike congruities in the arena. One of the most prominent yet less discussed is the bonding between Iran and Turkey and the Muslim Brotherhood movements in the region. The outreach to the Muslim Brotherhood is a low-cost investment for Tehran that could lead to an increase in its influence. Whereas for the Brotherhood, this collaboration can turn out to be useful in aligning with a regional power, to serve its political leverage. Given below are a few possible reasons for such unusual alliances.

The Muslim Brotherhood is a transnational organization that belongs to the Sunni school of thought of Islam whereas Iran has been ruled by a Shiite government since the Islamic Revolution in 1979. Muslim brotherhood was established as a revivalist organization in 1928 by Hassan al-Banna, an Egyptian scholar who primarily preached Islamic fundamentalism. The movement spread widely among masses despite repression and continuous efforts by Middle Eastern regimes to suppress the group. The Muslim Brotherhood was just a fringe group in Middle Eastern politics till the six-day war between Israel and five Arab states, in which the former managed to snatch the Gaza strip and the Sinai Peninsula from Egypt, the west bank from Jordan and Golan Heights from Syria. Taking advantage of the low morale of the general public, the Muslim Brotherhood started to present itself as a potential alternative to Arab secular nationalism. The Muslim Brotherhood tried to revolt against late Syrian President Hafez Al-Assad in 1982 through violence and agitation but he somehow managed to crush the growing uprising. The Brotherhood remained a forbidden faction and was rather considered a terrorist organization in Arab states governed by secular leaderships especially after involvement in the insurgency in Syria.

Muslim Brotherhood and the Arab Spring

The Muslim Brotherhood did not lose hope and continued to work hard in silence to gain social acceptance and support. They conveyed their ideological indoctrination through mosques and supported the poor financially, to incline them towards their fundamentalist philosophy until the eruption of Arab Spring in early 2010. The Brotherhood took it as an opportunity and emerged as a possible substitute for corrupt regimes. Hence, they capitalized the Arab Spring to gain substantial political power in the region that eventually led to the legalization of both the Ennahda Movement in Tunisia (which was highly influenced by Hassan al-Banna and Abul A’la Maududi) and Muslim Brotherhood in Egypt. Ennahda won 37 percent of votes in the first-ever general elections after independence, conducted in October 2011. They formed the government in Tunisia as they were the strongest party in the legislature. However, in 2014, the government of Ennahda was ousted because of an uproar against the Islamization of laws in a traditionally secular country and also on charges of alleged involvement in assassination of two leftist secular politicians, Chokri Belaid and Mohamed Brahmi. On the other hand, Presidential elections held in Egypt in 2012, which brought Muslim Brotherhood’s candidate Mohamed Morsi in office. Unfortunately, he was also overthrown by coup d’état led by Field Marsal Abdel Fattah el-Sisi. Similarly, the Islamist organization also succeeded in provoking riots and civil disobedience in Syria that live till today, with the help of Turkey and Qatar. But they failed to cash the opportunity the second time, after the first attempt in the early 1980s.

The Brotherhood Draws Inspiration from Iran

By closely accessing the geopolitics of the Middle East, we can understand the reason behind Qatar and Turkey’s support for the group in the MENA region and beyond as their leaderships share almost the same ideological basis. But why are they supported by the Shiite government of Iran, keeping in view that the popular base of movement considers the Shiite sect as Khawarij or dissidents of Islam? According to their ideology, as depicted in their publications and literature, they are:

The Brotherhood is inspired by Iran as they made an Islamic revolution possible. They believe that if Iran, which was ruled by a secular Shah who was a major stakeholder of regional politics and was most closely aligned with western powers, could manage a right-wing uprising, then the dream of an Islamic state in areas like Egypt is not an unrealistic one. In addition to that, the Muslim Brotherhood also accommodated leftist social concepts and in order to resolve social conflict within an Islamic society.

Geopolitical Relationship Between the Muslim Brotherhood and Iran

Iran and the Brotherhood are involved in a love-hate relationship as both of them cooperate as well as oppose each other in different geopolitical scenarios. For example, when the Syrian Muslim Brotherhood and its allies rebelled against President Hafez Al-Assad, it received great backing from Saddam Hussein. While Iran which was involved in a brutal war with Iraq sided with the Syrian President. In a similar manner, when Brotherhood-backed groups tried to change the regime during the US-plotted Arab Spring, Iran again sided with President Bashar Al-Assad and provided him financial as well as military support. Contrarily, both of these parties have also collaborated in the matters of mutual interest. In 2013, during the rule of Mohamed Morsi, an Islamic Summit was held in Cairo and then-President Mahmoud Ahmadinejad participated on the behalf of Iran.

A practical example of the proverb ‘The enemy of my enemy is my friend’ is the alliance of the Brotherhood and Iranian regime against KSA. In November 2019, The Intercept and The New York Times leaked highly classified documents of Iranian intelligence showing a meeting between Al Quds Force of Iran and the Muslim Brotherhood was held in Ankara in 2014. They discussed possible ways to counter the enemies in the region and beyond including Saudi Arabia, Israel and perhaps the United States. The issue of Yemen also came under discussion as Iranians have been supporting the Shia-led Houthis in Yemen whereas the Brotherhood also has its stakes through the Yemeni Congregation for Reform or simply Al-Islah movement which has an impact on Sunni tribal leaders.

As we see a huge sectarian divide in the MENA region, especially after the Arab Spring, the fundamentalist Islamic movements have grounds to agree to cooperate, than the general public who is trying to rebuild normal life after the long term turbulence in the region. Iran has worked hard to knock off both large and small IRGC-linked armed militias, the majority of which are Shia dominated, spreading from Lebanon’s Hezbollah to the Zainebiyoun Brigade of Pakistan. Tehran may enhance its ties with the organization, in the hope that if it comes to power, it would serve as a friend in the region. So, there are high possibilities of more such need-based partnerships and alliances between these fundamentalist groups as they have set aside their ideological and moral foundations so as to strengthen their political agendas.

About Hassan Aziz 1 Article
Hassan Aziz is a student of Law at International Islamic University, Islamabad. He's presently working as a Media Secretary at Law Students Council. He regularly follows international developments especially in South Asia and the Middle East. He can be reached through twitter at @H_AzizPK

When A Legend Falls

Print PDFQassem Soleimani’s assassination triggered not a whirlwind, but tornadoes of response. Stocks plummeted and oil prices soared. Across the region and beyond, conference rooms and social media began buzzing with activity. Whispers of World […]

Print PDFThe protracted trade war, accusation of the Covid-19 outbreak, and increasing military activities in the South China Sea had been contributing to a new conflict and military confrontation between the USA and China. This […]

Indian Barbarism in Kashmir and t …by Dr. Attiq ur Rehman5 hours ago

The Pandemic Highlights the Disma …by Tanmay Kadam1 day ago