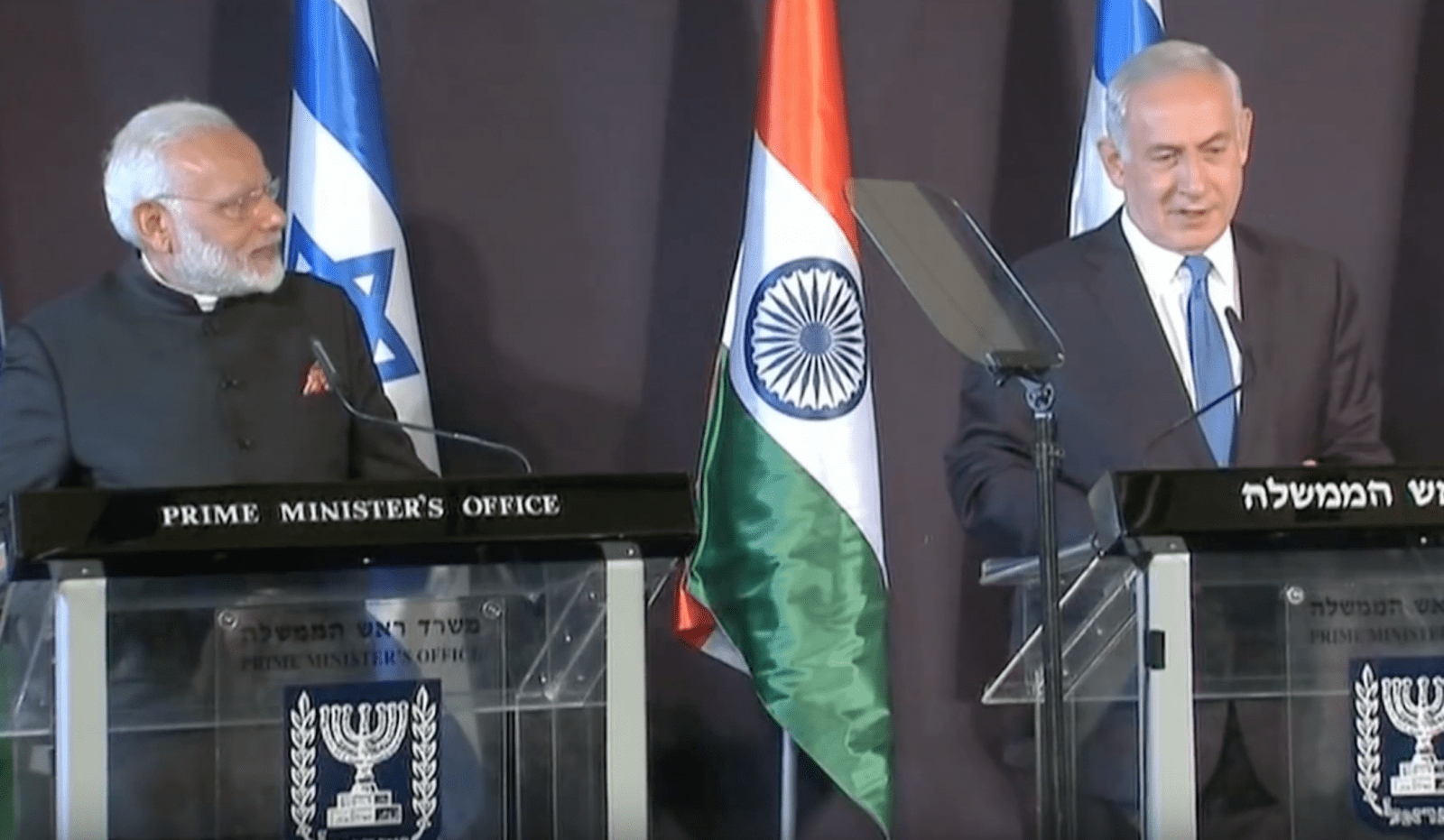 The post-Pulwama military crisis and India’s recent move to revoke articles 370 and 35(A), which gave Indian-held Kashmir a distinct constitutional status and administrative structure, have not only raised the ominous prospect of war between the two nuclear-armed South Asian states but has also led to some interesting comparisons between India and Israel, especially in their dealings with the occupied territories of Kashmir and Palestine respectively. These comparisons have been lent credence due to increasing military ties between India and Israel, the significant political shift towards the right in both polities, and the personal bonhomie that Modi and Netanyahu have established over the years. Some analysts have even gone so far as to frame this relationship as an ‘ideological affinity’, in which ideas of the BJP and the Likud converge.

This article attempts to understand and highlight the key similarities and differences between India and Israel, with particular reference to their policies vis-à-vis occupied territories.

New Delhi and Tel Aviv maintain military occupations over lands that they forcefully annexed and hold in contravention of international law and conventions. These military occupations entail the use of brute force, humiliation of the occupied people, curfews and sieges (in the case of Gaza, the siege is perpetual), the killing of non-combatants, frequent flexing of military muscle, and, to borrow a phrase from Haaretz, a ‘reality of their lives that includes every element of incitement possible.’ In Operation Protective Edge, waged purportedly in retaliation to rocket attacks from Hamas, Israel killed more than 2,000 civilians, including 500 children. In the Great March of Return in 2018, Israel killed more than 250 Palestinians in Gaza, most of them demonstrators. The purpose of the march was to call for the end of the 12-year blockade of the Gaza Strip; it was non-violent and involved children and women.

Protestors in Kashmir have been dealt with using no less brutality. The use of live ammunition and pellet guns has resulted in the death and blinding of thousands of people, including children and women. Kashmiris remember 2016 as the ‘year of mass blinding’. It has been nearly three months now that Indian-held Kashmir has been under lockdown, and a media blackout imposed.

Both states claim to be democracies. Israel claims it is the only democracy in the Middle East, while India is considered the largest democracy in the world. Notwithstanding their claims of commitment to democratic principles, they have done their utmost to undermine peoples’ political aspirations expressed through free and transparent elections. New Delhi rigged the 1987 elections in Indian-held Kashmir, triggering a violent insurgency which would lead to the death of thousands of people, disappearances and the invention of such terms as ‘half widows’. The political manner in which India revoked articles 370 and 35(A) is a serious indictment against its democratic credentials. A curfew was imposed; the Kashmiri leadership was put under house arrest and more troops were sent to deal with any potential display of public defiance and resistance. Likewise, when Hamas won the second legislative elections in occupied territories in 2006, Israel responded with invading the Gaza Strip. The refusal to recognize Hamas’ political mandate led to internal fighting between Palestinian political factions, which culminated with Hamas controlling the Gaza Strip and the Fatah holding the West Bank.

One of the other commonalities that Israel and India share is their utter disregard for and curt treatment of international law and conventions, further complicating political solutions to these conflicts. Giving short shrift to UN resolutions and global consensus on a two-state solution, Israel has taken measures such as continued construction of Jewish settlements, the demolition of Palestinian homes and dividing whatever little territory they hold into Bantustans and cantons. These policies have not only undermined the cause but also raised questions as to the viability of a two-state solution itself.

Despite being the party that internationalized the Kashmir conflict by taking it to the United Nations, India has refused to comply with its resolutions to hold a plebiscite in Kashmir. And New Delhi’s recent move to unilaterally change the status of a disputed region lends credence to the assertion that India has been in flagrant violation of international and bilateral treaties when it comes to Kashmir. What the policies of both states have yielded are a perpetuation of the oppression of occupied territories and a further complication of these disputes, putting regional peace and stability at continuous risk.

Important though these similarities are, there are significant differences between India and Israel with regards to their policies over Kashmir and Palestine respectively, as well as in the political aspirations of Kashmiris and Palestinians.

Despite the Indian military occupation of Kashmir and the attendant social and political toll it has taken on the people, India’s has not been a colonial settler project, at least till now. Unlike Kashmiris, Palestinians hold only 22 percent of historic Palestine; even that percentage has been considerably reduced due to Israel’s illegal settlement of Jewish people in the West Bank and East Jerusalem. In the initial stages of Zionism, the Jewish leadership propagated this myth: “A land without a people, for a people without land.” The late Edward W. Said used to say that the conventional logic of human rights did not capture the Palestinian predicament, because prior to claiming their rights they had to establish their past experience of continued existence and inhabitancy in lands that Zionists now claim exclusively by invoking biblical references. Despite being under military occupation, Kashmiris can still claim to have control over their lands, though New Delhi’s recent move to change the special status of Indian-held Kashmir raises the spectre of artificial demographic changes in the valley.

Those who have been closely following the trajectory of the Palestinian nationalist movement in recent decades have witnessed a perceptible change of opinion among common Palestinians and intellectuals, both Jewish and Arabs, as to the viability of a two-state solution. Israeli settlements consist of more than half a million Jews living in the West Bank and Israel controls most parts of its territory. These settlements, Israel’s reluctance to vacate them, and the debilitating social and economic cost the military occupation has had on Palestinians and their lands (such as depleting water reserves and severing of cultural ties in a process termed de-development by Sara Roy) has made Palestinians and other intellectuals question the survivability of a Palestinian state even if it is established. That is why the political case of bi-nationalism (two nations- Arabs and Jews- living together under one state as equal citizens) has found increasing traction among Palestinians. As for the majority of Kashmiris, one of their fundamental demands has been that they be given the right to self-determination, and their aversion to the idea of being a part of India is not contested.

Any comparison between Israel and India demands a nuanced approach that explores not just the similarities between military occupations in Palestine and Kashmir respectively but also acknowledges the significant differences between them. This essay has made an attempt to that end. All military occupations entail injustice; each oppressed people experiences it differently and in their own unique way.