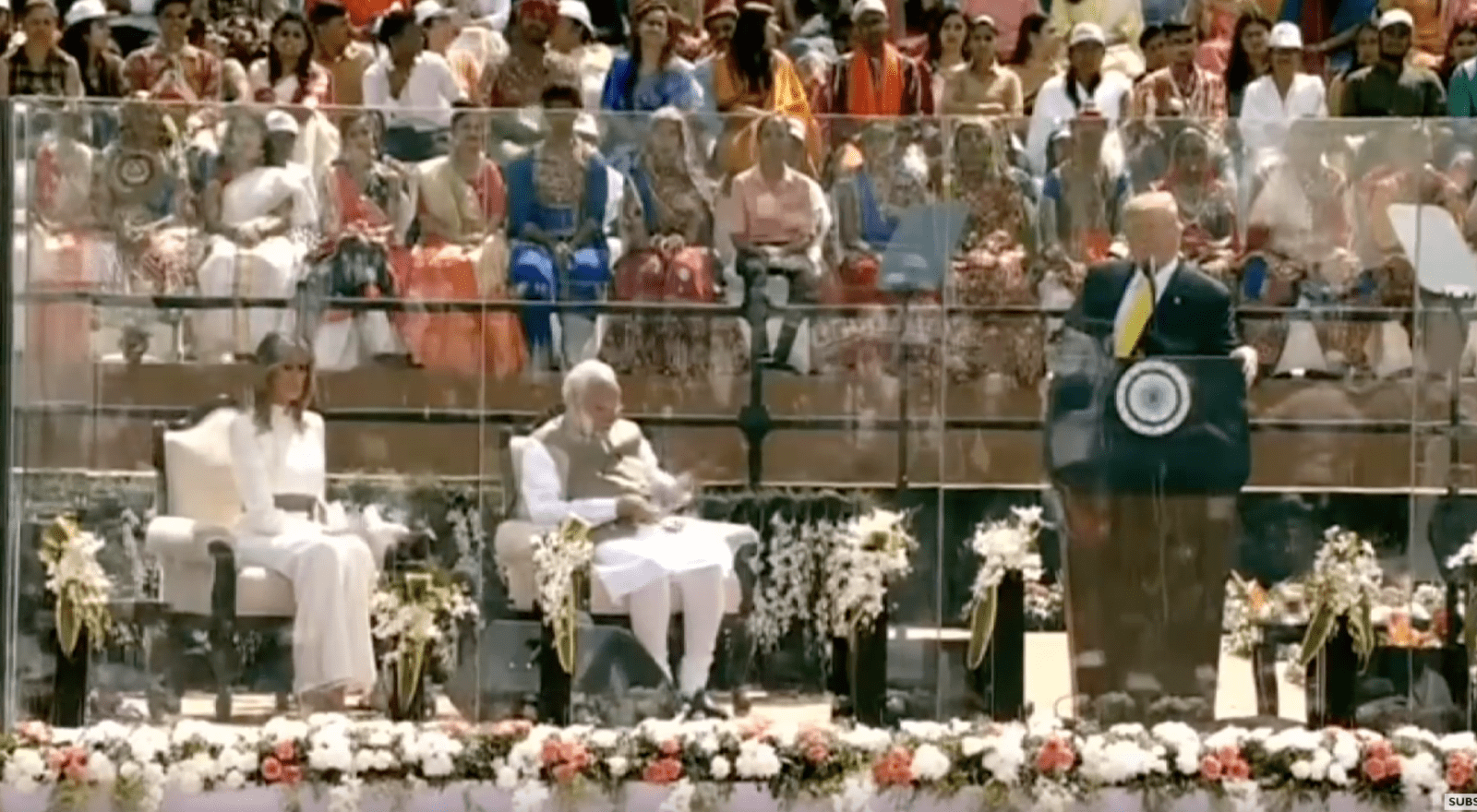 Landing in India today for his maiden visit, President Donald Trump becomes the eighth serving US president to visit the country since 1947. The extravagant welcome arranged by Prime Minister Modi is aimed at concealing the real face of India by hiding slums behind walls and caging the monkeys.

The visit comes amid tensions over trade issues, and India’s multibillion-dollar deal with Russia for the purchase of S-400, which has fuelled friction between the two countries lately. Besides, the controversy over the Citizenship Amendment Act (CAA) and developing situation in Kashmir may also feature in the discussions between the two leaders.

From Pakistan’s perspective, the outcome of the visit should have at least some takeaways for the Kashmir issue as it holds significance for stability in the region. Although it sounds less scholarly and more conspiratorial, yet there have been apprehensions about India conducting a false flag operation around President Trump’s visit to India. Pakistan’s Foreign Office issued a statement on February 13 raising concerns about the possibility of India seeking to create some distraction during Trump’s visit. Such an episode could help India undo the little resistance that is there in the US against Modi’s recent actions in Kashmir and CAA.

However, the possibility is still alive. Recall Chittisinghpura incident of 2000, where 36 Sikh men were shot dead in occupied Kashmir while President Bill Clinton was visiting India. The timing of the terrorist attacks in India in the past point out to a particular Indian behaviour vis-à-vis Pakistan. For instance, Pathankot and Uri attacks paved way for cancellation of Foreign Secretary level talks and postponement of SAARC summit. Most recently, the Pulwama crisis led to the delay in Saudi Crown Prince’s Visit to Islamabad. The visit that otherwise could have been a conducive meeting between the heads of two states turned out to be a consequence management exercise.

The possible motivation behind India using such incidents and attacks can be to; raise terrorism related allegations against Pakistan to avoid dialogue that will eventually require India to deal with Pakistan as an equal partner for resolution of outstanding disputes, delegitimize Kashmiri freedom struggle as terrorism, gaining international sympathies to pursue Pakistan’s diplomatic isolation, and serve domestic political ends. Therefore, the probability of such attack happening makes a lot of sense as it serves Indian agenda of portraying Pakistan in bad picture.

Compared to eight US presidential visits to India, only five American presidents have landed in Pakistan, Bill Clinton being the last one. George W Bush also made a brief visit to Pakistan in 2006 while actually travelling to India. For this very reason, Pakistan has largely been viewed through Indian prism and is seen as a problem rather than a solution to all the ills in the region. It is likely that Pakistan’s concerns regarding Kashmir and treatment of Muslims in India will be overshadowed by PM Modi’s attempts to rationalize its actions – if at all this issue comes up in the meeting between the two heads. The challenge here for President Trump will be to independently deal with India and Pakistan, as he claims to be different than his predecessor Obama!

It is less likely that Kashmir will figure prominently in the discussion as there are more important issues of interest at hand for the two states to deal with. Additionally, public discussion over Kashmir does not suit either of the two leaders who are eager to settle a host of other issues and would view it as an irritant. Even if discussed, it is unlikely to make headlines as a major outcome of the visit.

Indo-US strategic and trade partnership is of immense significance for the two countries owing to their respective regional interests. Recently, India and the US have concluded several defence related agreements that facilitate India to obtain critical defence technologies from the US, exchange of information in space situational awareness, intention to co-develop a range of cutting-edge war fighting technologies and systems for their militaries, secure transfer of key information and technology. Despite growing defence partnership with the US, India has kept its options open. India’s purchase of S-400 from Russia has become a problem for India-US relationship. The US resentment over India and Russia deal is unlikely to change India’s decision of acquiring S-400. US is not in the position to antagonize India as it serves the primary American interest of countering China in the region. Therefore, it is likely that India will be given Countering America’s Adversaries through Sanctions Act (CAATSA) waiver on the S-400 deal with Russia.

By preparing India as a counterweight to China, the US is only giving more impetus to nefarious Indian designs against Pakistan. While the US may be getting India battle ready for China, India has taken this opportunity to increase its conventional and nuclear capability vis-à-vis Pakistan. If the US chooses to remain oblivious to the destabilizing Indian actions, it is unlikely that it will ever wield reasonable influence to address regional stability in future. This is all the more important amidst an approaching settlement of America’s longest war in Afghanistan and deteriorating relationship with Iran.

Ballistic Missiles Amidst the Hypersonic Hype

Print PDFEver since the Russian demonstration of Avangard glide vehicle in March 2018, the world seems to be in the hype over the new weapons that are often touted as “unstoppable”. While the hypersonic glide […]

“The Fate of Terrorism and Extremism in Pakistan”

Print PDFAnalyzing the terrorist activities in Pakistan over the last 2 decades, a visible decline can be observed since 2013. Terrorism grew from 2000 to 2013 and was at its peak, but it decreased from […]