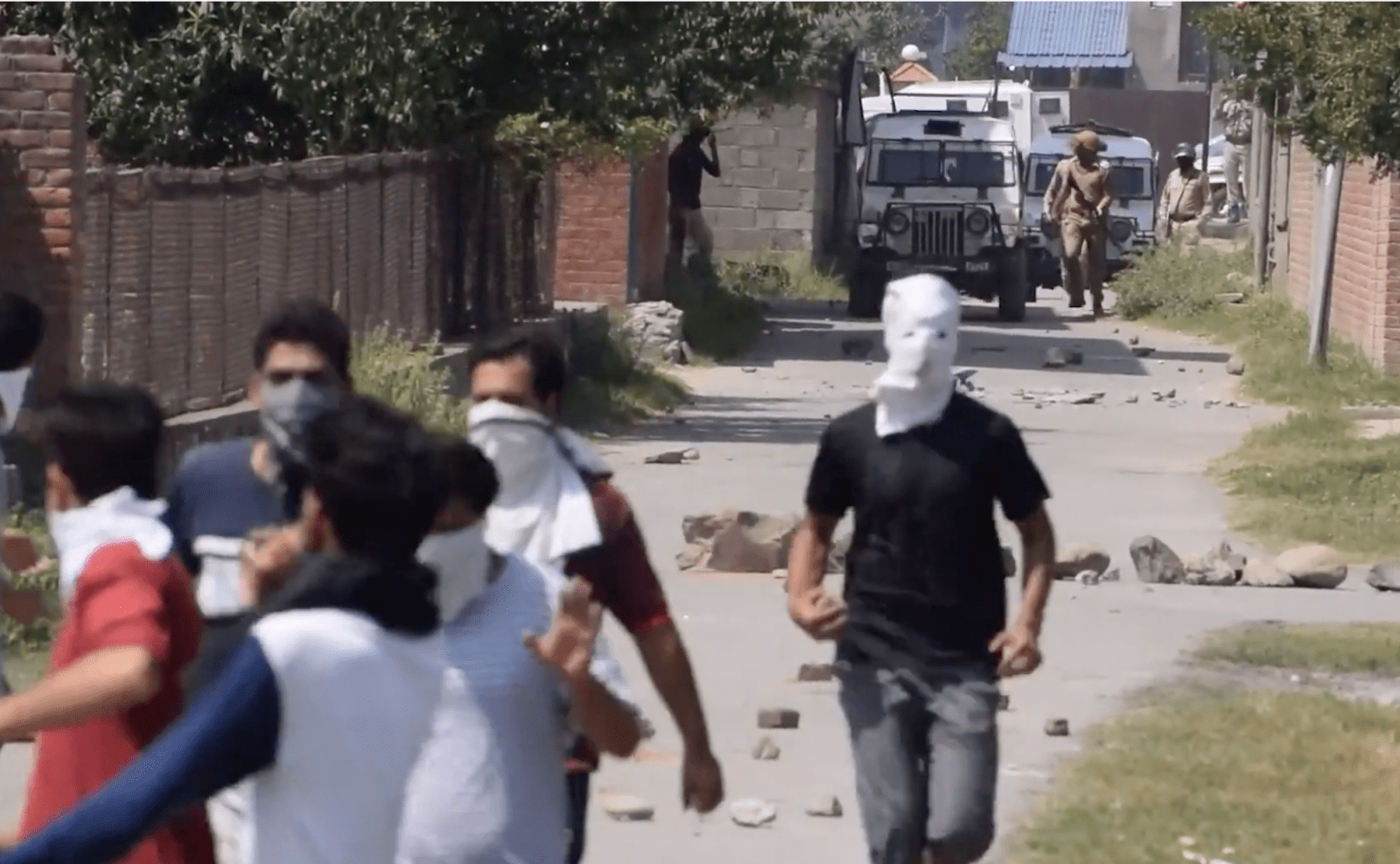 The scenic vale of Kashmir with a population of over 7.5 million Muslims is firmly in India’s fist like never before. The struggle for freedom has been brandished as a terrorist insurgency with groups fighting in Kashmir such as Lashkar-e-Taiba, Jaish-e-Muhammad and Harkat-ul-Mujahideen all firmly in UNSC Al-Qaeda Sanctions Committee list under UNSC resolution 1267, labelled as terrorist organizations with all of their aliases. Furthermore, the Islamic State of Jammu and Kashmir (ISJK) and Al-Qaeda have also delineated the Kashmiri struggle from one of the right to self-determination to one linked with Global Terrorism. The international community, once active in the Kashmir dispute has quietly reclined over recent times to label it as a ‘bilateral matter’. This is a far cry from the dispute’s status in its early days when it was high on the international community’s agenda for people fighting for the right to self-determination. Under international law, Common Article 1(1) of the International Covenant on Economic Social and Cultural Rights (ICESCR) and International Covenant on Civil and Political Rights (ICCPR), it is imperative that everyone has the right to self-determination and that right is inclusive of the right to determine their own political status and pursue their social, economic and cultural development without interference. Interestingly, India had an objection to signing these covenants with these articles in their present form. However, states such as France and Germany (erstwhile East Germany) were adamant that these articles should be included in their original form. However, gone are those days of the 60’s. During that decade, after its humiliating defeat at the hands of China in 1962, India also proposed to come to a solution that would seem very favorable to Pakistan in present day. However, the rigidity of Zulfiqar Ali Bhutto and the military regime at the time to have the entirety of Kashmir left that solution beseeching.

The trajectory that the Kashmir dispute has followed has been one garnering multilateral fora’s attention to being relegated as a bilateral dispute, following Shimla agreement, to its present day status where India unilaterally holds in abeyance Article 370, a critical component of Kashmir’s accession to India. Presently, in complete violation of resolutions 91, of 1951, and 122, of 1957, India has adopted unilateral actions to change the status of the state through the Presidential Order C.O 272.

It wouldn’t be wrong to acquiescence with Kapil Komireddi in his article ‘The Kashmir Crisis isn’t about territory. It’s about a Hindu victory over Islam’ in his Washington Post article. This is largely true as the position of Ladakh and Nagaland point to this fact. India is holding talks with the National Socialist Council of Nagalim (Isak-Muivah) [NCSN(I-M)] under Modi appointed governor R.N Ravi, a former intelligence officer, on one hand in order to grant special concessions to Nagaland such as its own flag and constitution, while withdrawing the same special concessions from the state of Jammu & Kashmir. Similarly, the state of Jammu & Kashmir has been bifurcated into two union territories comprising Jammu &Kashmir on one hand and the territory of Ladakh on the other hand. This was much to the chagrin of Muslim Majority Kargil district residents in Ladakh.

Additionally, this bifurcation has been in complete violation of the Indian constitution, a bifurcation that demands the opinion of the state assembly, which is required under Article 3 of the Indian Constitution, and considering Kashmir’s special status, according to Hyderabadi Indian law Professor Faizan Mustafa-in his interview to thewire.in – the assent of the Jammu & Kashmir legislative assembly was necessitated in this instance. The only previous bifurcation of any state in India-against the wishes of the legislative assembly of that particular state- was that of Telangana and Andhra Pradesh in 2014. This bifurcation was done to a state that did not have any special status in the Indian constitution; A status held to be permanent by Indian Courts on multiple occasions and that was taken away from Jammu & Kashmir by a mere Presidential Order.

Another example of India maligning its minority Muslim community is in Assam where India has passed an order to revoke the citizenship of around 4 m Muslim; those who cannot verify that they were in the state before 1971. The Universal Declaration of Human Rights enshrines having a nationality as a right, forbidding countries to arbitrarily deprive someone of it. A UN convention from 1961 goes further, banning the withdrawal of citizenship based on race, religion or politics, and also banning it in cases where doing so would leave a person stateless. Thus, the Assamese case is another example of Kapil Komireddi’s allusion to ‘Hindu victory over Islam’ in direct breach of international law.

Henceforth, these examples show that Narendra Modi’s Hindu Nationalist BJP has sought to tighten the nozzle over Kashmir in direct usurpation of the rights of Muslims in Kashmir in particular, and in India in general. This has concurrently weakened Pakistan’s ‘Kashmir claim’ as Indian highhandedness regarding dealing with Kashmir has become more forceful. In the past, the region was dealt with cautiously due to the nature of the international dispute, currently India has found it acceptable to single it out and make changes to its status.

Internationally, the Kashmir cause has also attenuated over the previous decades. Once, seen as the harbinger for the rights of people looking for self-determination including those in Palestine & East Timor, it has now been labelled as a ‘terrorism backed separatist movement’ with little appeal in the Muslim world lest say globally. An example of this is the UAE & Bahrain awarding their highest civil awards to Modi in the midst of the current crisis. Weak, if any, statements have come from across the Muslim world. India has successfully linked it to Islamic terrorism internationally and as a separatist insurgency linked with movements such as that in Balochistan bilaterally, while in talks with Pakistan. Considering its downfall from prestige is the fact that the United Nations Security Council (UNSC) does not even give it a serious formal session anymore, whereas previously i.e. before the Shimla agreement, 18 resolutions of the UNSC have been passed concerning the dispute. It has, through successful Indian diplomacy, been relegated to the sidelines of International fora; who are more concerned with loopholes in the Pakistani financial system, which gives rise to terror financing, than the rights of the Kashmiri people.

Touching upon the breach of International law that India is doing in Kashmir, it is to be seen that while the law governing international armed conflict under Article 2 to the Geneva Convention necessitates applicability of International Humanitarian law and Human Rights law to Kashmir, India has instead resorted to quietly sidelining this jurisprudence in direct flouting of international law. Curfews, Communication blackouts, forced detentions and complete media censorship violate international conventions such as ICCPR and ICESCR. The right to freedom of expression in particular is provided under Article 19 of the ICCPR, and it is being blatantly violated by Indian authorities in the region. The current spate of gross fundamental rights violations can trace their trajectory back to July 8th, 2016, when a mass uprising against the Indian state started due to the extrajudicial killing of Burhan Wani. These atrocities being committed have been outlined in detail in the office of the United Nations High Commissioner for Human Rights in a report on the situation of human rights in Kashmir. Indiscriminate use of pellet guns -what has been referred to by Mirza Waheed in his article in ‘TheGuardian’ as World’s first mass blinding-, preventing Muslims from performing their religious obligations such as the sacrifice of cows during Eid-ul-Adha or performing Friday prayers are some of the violations that have increased since this report came out. The report also outlines in detail the injuries caused due to pellet gun usage. The most discriminatory law in the shape of the Armed Forces Special Protection Act (AFSPA) in usage since 1990 has prevented Indian military personnel from being tried by a court of law or redeemed and provided impunity to them from atrocities committed in the state from even internal inquiries. In one particular case the officer who tied a young stone pelter in front of his jeep and drove around was honoured with the Chief’s commendation certificate instead of being put on trial. Such travesty of justice was not even afforded to American forces in Iraq or Afghanistan.  Additionally, India looks set to violate Article 49 of the 4th Geneva Convention which calls for an occupying power, India in this case, not to deport or transfer parts of its own population into the territories it occupies. This violation will lead to changes in the demographics of the Kashmiri state and the UN mandated plebiscite will be held in a drastically altered population if the nefarious designs of BJP succeed.

The truth of the matter remains that Pakistan’s cry for its brethren in Kashmir has lost steam. Through a cross-domain strategy, Indians have successfully delegitimized the Kashmir cause under the garb of religious terrorism by delineating it from the cause of the right to self-determination of an oppressed people to one which is unrepresentative of the Kashmir populace. However, the reality could not have been more misconstrued as instead, it is the Hindu fundamentalists of RSS & BJP that are hell bent on terrorizing the peace-loving populace of the vale and subjugating them. The time for Pakistan to come to the aid of Kashmiris is now or never. History will not be forgiving to the current Pakistani leadership if it sits silently on the wall and makes only meagre diplomatic and legal efforts while Delhi marches on towards a silent genocide of the Kashmiris. It is only a matter of time that Nazi-inspired concentration camps ripe with firing squads spring up under the Hindutva motivated BJP. Before events take a turn for the worse, the state of Pakistan must decisively act for the freedom of Kashmir in order to ensure long term safety, security and autonomy of the Muslims of the subcontinent.

About Omer Aamir 1 Article
The writer is a Researcher at Center for Aerospace & Security Studies (CASS) and has done B.A LL.B (Hons) from LUMS. He plans to pursue International law and International Relations for further studies

Print PDFDeterrence stability in South Asia has faced considerable setbacks following recent developments in the South Asian security landscape. The Kashmir dispute has always remained the core bone of contention between Pakistan and India. The […]

Print PDFIn recent ages, no international maritime dispute has garnered more attention than the contest over the islands, reefs and waters of the South China Sea. The South China Sea is not only a strategic […]