Ironically the Iranian nuclear program began with the help of the United States in 1957, and as part of a civil nuclear deal, the U.S. leased enriched uranium to Iran. In 1958 Iran joined the International Atomic Agency (IAEA). To ensure the rest of the world that its nuclear development was intended for peaceful purposes only, Iran began allowing IAEA officials to inspect its program, but after the 1979 Revolution, the U.S. stopped providing Iran with highly enriched uranium.

The contemporary history of the Iranian nuclear issue began in 2002 when the National Council of Resistance of Iran (NCRI), an anti-regime entity, announced 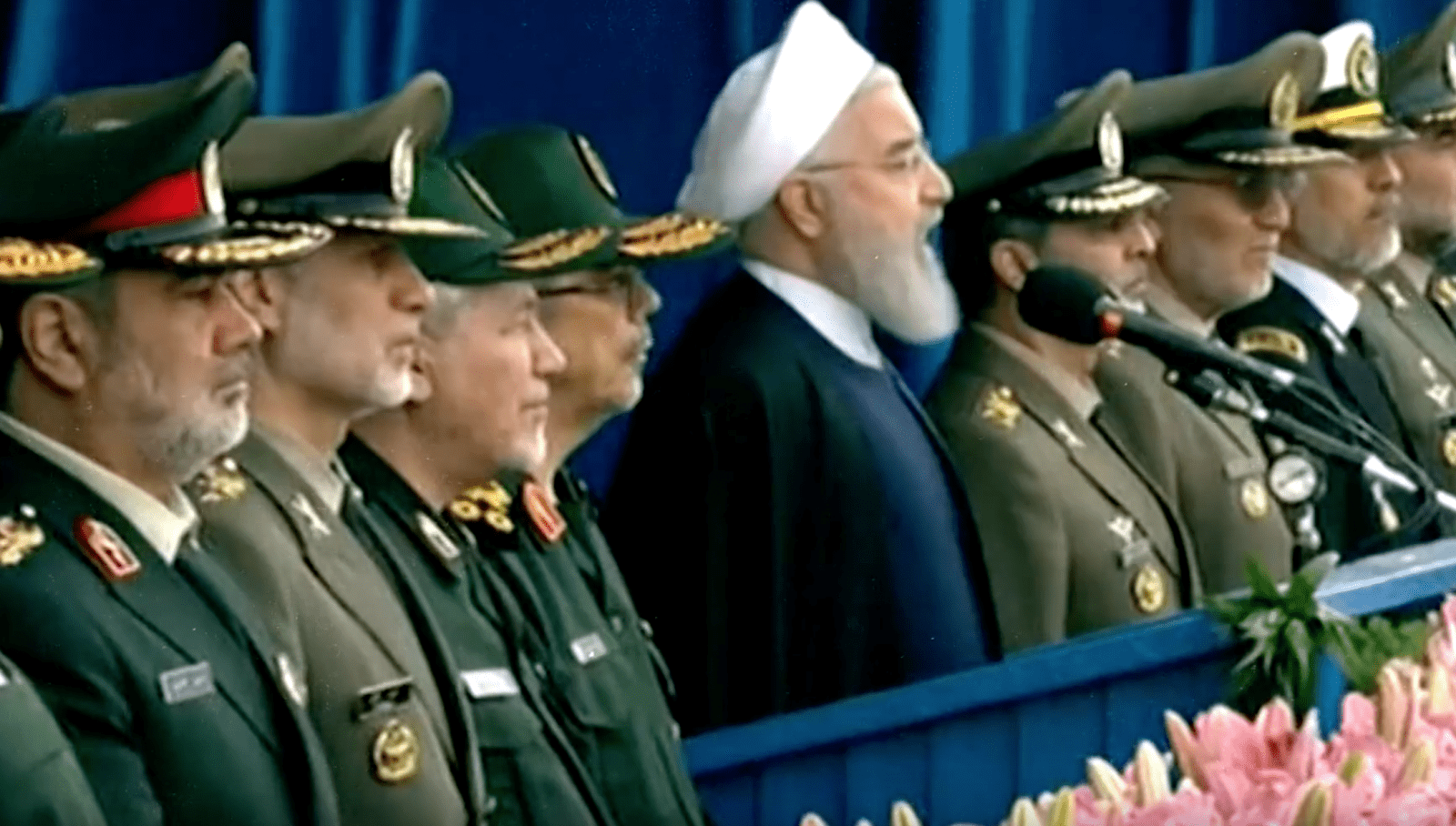 that Iran has undisclosed nuclear facilities and had been working on a nuclear weapons program. Details were released about Natanz Enrichment Complex; the heavy water production plant under construction at Arak; and the operator Kalaye Electric Company. The NCRI also released names of several companies and individuals engaged with the program. The facility being constructed at Arak would have had the capacity to provide for the plutonium suitable for developing a nuclear weapon.

In 2005, Iran and Russia reached an agreement whereby Iran would be helped in the construction of the Bushehr reactor, and Russia would provide fuel while the spent fuel would be returned to Russia. Since plutonium for nuclear weapons is extracted from spent fuel, the deal prevented Iran from its pursuit of a nuclear weapons program. Negotiations with United Kingdom, Germany, and France were halted once it became known that Isfahan facility has begun production of uranium hexafluoride.

In 2006 Iran suspended IAEA inspections after the IAEA referred Iran’s nuclear program to the United Nations Security Council. Several key individuals linked to the Iranian nuclear program were assassinated, supposedly by the Mossad. In 2012 an enrichment facility went offline in the aftermath of the cyber attack (Stuxnet). During 2013, while several sanctions targeted Iran, an interim agreement was made between the permanent members of the U.N. Security Council and Iran. The Head of the Atomic Energy Commission of Iran AEOI declared the IR-8 centrifuges that were reported to have an output of 24 SWU, to the IAEA. However, there are questions about its output that remain unresolved.

In exchange for the lifting of sanctions, Iran agreed to limit its uranium enrichment capacity and reduce the enriched uranium stockpiles, and other measures to curtail the overall capacity of the nuclear program. On July 14th 2015, Iran and the P5+1 reached a deal that later became known as the 2015 Iran Deal or the Joint Comprehensive Plan of Action (JCPOA).

The nuclear deal was adopted on October 18th 2015 between the P5+1 and Iran, nuclear-related sanctions imposed by the E.U. and the U.S. were lifted and subsequently U.N. Security Council Resolution 2231 2015 ended U.N. sanctions pertaining to the nuclear program of Iran. IAEA inspections revealed that although Iran was pursuing a nuclear weapons program before 2003, the activities ceased after 2009 did not provide any evidence of the nuclear program. The sanctions in place were lifted after the IAEA reported that Iran’s nuclear weapons activities have ceased.

Beginning of 2017, the U.S. Treasury Department imposed sanctions on individuals and entities engaged with Iran’s ballistic missile program. In July, new sanctions were placed on Iran when the House of Representatives passed H.R. 3364 under, Countering Adversarial Nations Through Sanctions Act. This was the beginning of the U.S. campaign of ‘maximum pressure’ towards the Iranian regime.

Despite several IAEA reports stating that Iran is in complete compliance with the nuclear deal, the White House officially withdrew from the JCPOA in May 2018 and imposed a new set of sanctions. It was later announced that the Trump Administration would follow a policy of applying financial pressure on the Iranian regime. These sanctions prohibit entities from conducting business with individuals and companies associated with Iran’s nuclear program, the ballistic missile program, and with the Iranian regime. To increase the pressure on the Iranian regime, Trump administration imposed another set of comprehensive sanctions on Iran’s banking, oil, shipping, and shipbuilding sectors.

At an institutional level, the U.S. became more suspicious of Iran’s capabilities. The U.S. Intelligence Community’s 2019 threat assessment of Iran stated that the JCPOA has increased the amount of ‘breakout’ time from ‘a few months’ to around ‘one year’. The “Instrument in Support of Trade Exchanges” (INSTEX) was established as a “special purpose vehicle” by UK, Germany, and France to facilitate trade with Iran in commodities and services that are not sanctioned. Subsequently, Iran created an entity to act as the counterpart of the INSTEX. Iran also declared installation of 20 IR-6 centrifuges at Natanz facility.

As late as March 2019, the IAEA has reported Iran’s compliance to the nuclear deal, keeping the stockpiles or enriched uranium and heavy water within the prescribed limits while the 3.67% enrichment level is also in line with the principles laid down in the nuclear deal.

In March 2019, the U.S. Treasury Department targeted 31 individuals and entities engaged in the past in Iran’s nuclear weapons program, the designation came with sanctions and travel restrictions and late in April, Iran’s Islamic Revolutionary Guard Corps (IRGC) was designated as a foreign terrorist organization. The IRGC designation was unique as it was the first incident of an arm of a state being labelled a terrorist organization, the IRGC Quds force and other sub-entities were also a part of the designation. Even though the IRGC was previously facing financial sanctions, the FTO designation complicated matters further by making a cooperation with regional entities impossible. It would also limit the regime’s military modernization plans. The U.S. also announced that waivers for sale of Iranian oil to some countries will not be renewed.

Beginning of the May, it was announced that the carrier strike group USS Abraham Lincoln and a bomber task force was deployed with the U.S. Central Command in the region to “send a clear and unmistakable message to the Iranian regime that any attack on United States interests or on those of our allies will be met with unrelenting force.” The U.S. also extended some waivers about the nuclear program while not extending others. No extension was allocated for the transfer and storage of Heavy Water and enriched uranium outside of Iran, which created compliance issues for Iran to its commitments under the nuclear deal. Subsequently, Iran’s Supreme National Security Council announced that Iran would cease continuance to abide by enriched uranium and Heavy Water stockpiles. The Iranian Foreign Minister said that Iran’s withdrawal from the nuclear non-Proliferation Treaty was also under consideration.

Foreign Ministers of UK, France, Germany, and the E.U. largely rejected the non-compliance threat and urged Iran to “continue meeting its commitments.” These countries also urged the other “countries not party to the JCPOA to refrain from taking any actions that impede the remaining parties” ability to fully perform their commitments” and urged the U.S. to “enable the continuation of legitimate trade with Iran.” Russian Foreign Minister termed the U.S. action as “irresponsible” that has created an “unacceptable situation”. Chinese Foreign Ministry blamed the U.S. for the “heightened tensions”, stating that “it is a shared responsibility of all parties to uphold and implement the JCPOA” and that Chinese entities undertaking business with Iran will be protected.

It can be observed here that the stance of the United States is different from that of remaining partners in the nuclear deal. Contrary to the U.S. claims, Iran’s nuclear program is not equipped to obtain a nuclear weapon in a short period. Weapons-grade uranium needs to be enriched beyond 90%, which would take a significant amount of time. Through the JCPOA and IAEA inspections, Iran’s nuclear program is being kept in check, and any pursuit of a nuclear weapons program is unlikely to remain discrete until completion. The JCPOA increases the breakout time for Iran significantly by limiting the level of enrichment and by capping the stockpiles of enriched uranium and heavy water. The campaign of ‘maximum pressure’ that the U.S. has started against Iran is influenced by Israel’s security concerns regarding Iran. The JCPOA is not the only international agreement the U.S. withdrew from in support of Israeli foreign policy; the U.S. also recognized Jerusalem as Israel’s capital and the Golan Heights as Israel’s territory in violation of several U.N. resolutions. The Trump Administration is also no stranger to withdrawing from agreements, one of the first actions of the Administration was the U.S. withdrawal from the Paris Agreement; a global effort against climate change. Iran is well within its rights to pursue nuclear energy and should be allowed to do so. The U.S. has played a negative role with respect to Iran’s nuclear program after the revolution. As a responsible nuclear steward, the U.S. should play a constructive role and should try to reduce the heightened tensions. Negotiations can be mediated via members of the JCPOA between the U.S. and Iran to address the legitimate concerns on both sides if there is a political will by the United States.

Print PDFAfter a prolonged negotiation spanning for over a decade, the US and India have finally signed Basic Exchange and Cooperation Agreement (BECA) during their third round of India-US 2+2 dialogue which involved the US […]