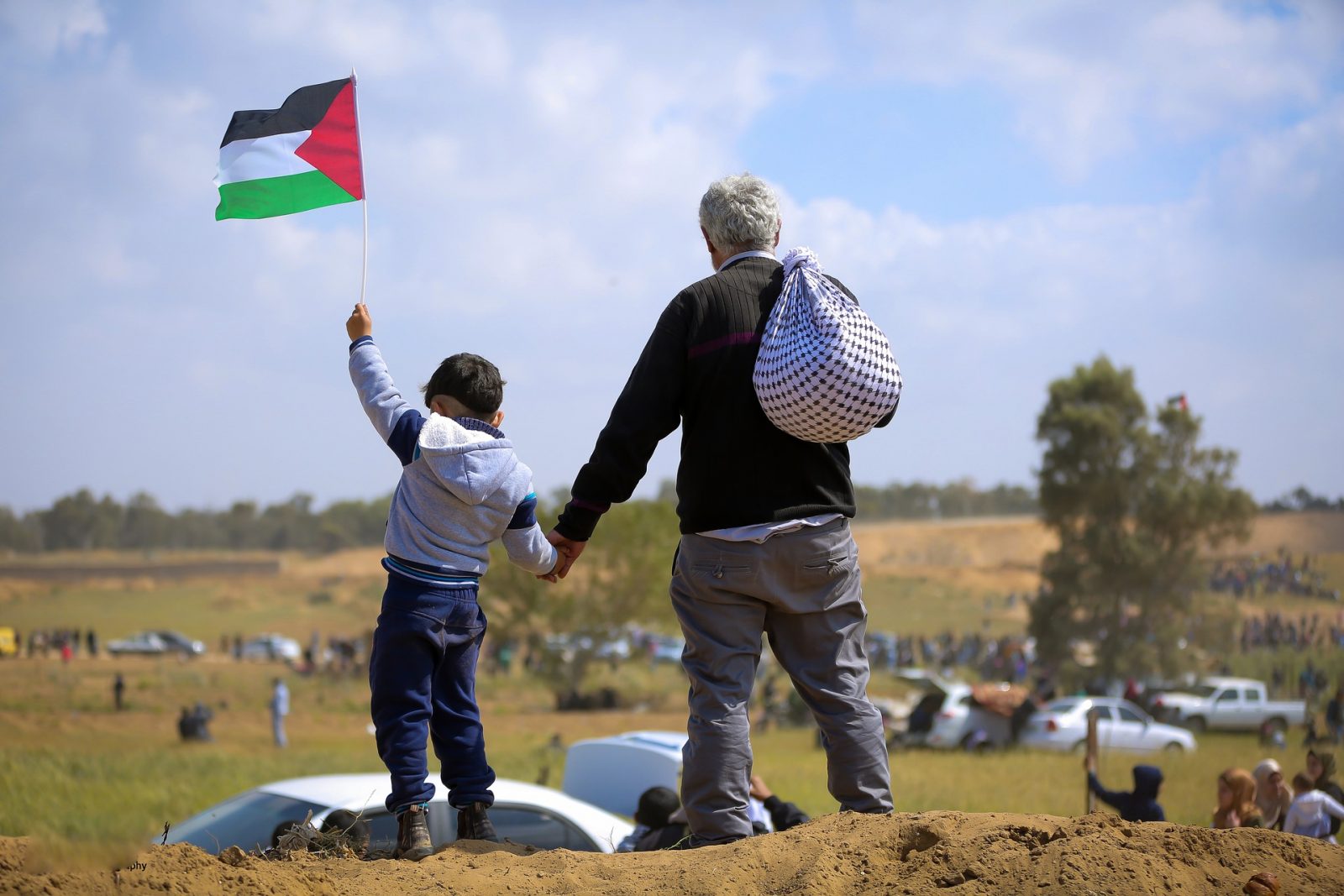 The Palestine-Israel dispute has transformed into the most intractable and interminable conflict in the Middle East. US President Donald Trump unveiled his administration’s “Vision for Peace, Prosperity and a Brighter Future” peace proposal for the solution of Palestine and Israel’s conflict on 28 January, 2020, in a press conference at the White House. This vision has been given the name of Trump Peace Proposal. President Trump has called this peace proposal the deal of the century, which seeks to resolve the most entrenched conflict of the Middle East.

However, critics of this plan have termed it as the devil’s deal and the ‘bluff of the millennium’. Disputed border claims, national security dilemmas, return of Palestinian refugees, Israeli forced settlements, disputed water sharing claims and divided stance over Jerusalem are main issues of Israel and Palestine. These two countries are the principal actors in this conflict. Since 1946, there have been close to 700 United Nations General Assembly resolutions and over 100 United Nations Security Council resolutions in connection with this conflict. This scenario reflects the gravity and complexity of the problem.

This article looks into the details of President Trump’s vision of “Peace, Prosperity and a Brighter Future” for Palestine and Israel. It is a detailed document released by the White House, having 181 pages and 22 sections which cover different subjects under political and economic development framework. It elucidates the peace plan and proposes solutions of security, boundary disputes, refugees, economic development and Jerusalem by keeping in consideration the needs of Israel and Palestine as per its claims. The proposed peace plan is a replication of the long held US-Israel joint strategy of expanding territorial control of Israel and consolidating the confiscated territory in the veneer of Israel’s security and development needs. The document cites security as Israel’s chief concern and economic development as the primary need of Palestine.

The security of Israel has been given primacy in the proposed peace plan. The issue of Israel’s security is resolved through the land for peace strategy. This strategy argues that Israel has genuine security concerns from Palestinian land, therefore, Israel will have legitimate right to ensure demilitarization of Palestinian territory even through the use of force. In the proposed peace plan, the state of Palestine will not be allowed to “develop military or paramilitary force capabilities”. The document outlines that the proposed state of Palestine would have to take Israel’s consent before establishing any formal diplomatic relations with other nations. It makes a point that the state of Palestine would have to withdraw all formal legal pleas taken at different international forums against the state of Israel.

Thus, it seeks to reduce Palestine to an autonomous region whose sovereignty will be subjected to Israel. The document argues, “Sovereignty is an amorphous concept that has evolved over time”. It argues that self-detonation is the hallmark of nations. Therefore, it seeks to replace the sovereignty of the state of Palestine with self-governance which makes it obvious that it will be unacceptable for the people of Palestine who have rendered huge sacrifices for this freedom struggle.

The second important aspect of this document is the attempt to legitimize Israeli settlements in Palestinian territory which is a part of US-Israel Peace for Security Strategy. Peace for Security Strategy argues that Israel will stop construction of new settlements for four years if Palestine accepts Israeli settlements in West Bank and East Jerusalem. The document refers to pre-1967 borders as a starting point for giving a considerable size of territory to Palestine but not its own exact territory because of border security concerns of Israel.

The document presents conceptual maps of Palestine and Israel on page 45 as a starting point for resolving boundary disputes but it shows US prejudice for Israel. The document clearly outlines that the issue of Palestinian refugees will not be settled in this peace plan. Rather, a separate mechanism will be devised under separate legal framework for their settlement. Thus, this peace proposal fails to present a solution to the contentious issues between the conflicting parties.

The US-Israel security for development strategy has produced favourable results for the security of Israel in the past. The US had been able to incentivize Egypt to swap security assurances to Israel in return of economic assistance from the US in the 1970’s Camp David accords. Camp David accords were instrumental in winning peace from the Arab world and recognition of state of Israel from Egypt. 1993’s Oslo accord also served the US-Israeli objective of pacifying PLO’s armed resistance to Israeli occupation.

President Trump’s administration has outlined an ambitious yet biased peace proposal for the solution of this conflict. President Trump announced the proposed peace plan for Palestine and Israel in a unilateral move by holding a joint press conference with Israeli premier Netanyahu. Absence from the announcement and lack of consent of Palestinian leadership on this plan reflects its future impracticality. The President of Palestine, Mahmood Abbas, has officially rejected Trump’s peace proposal. He announced to cut all ties with the US and Israel during his address at the Arab league meeting in Cairo. The Arab league has also rejected this peace plan.

This peace proposal is a unilateral move by President Trump’s administration to legitimize Israel’s territorial aggrandizement of Palestinian territory on the pretext of preserving Israel’s legitimate security interests. Pakistan has also expressed its concerns on this peace plan. Pakistan’s foreign ministry has issued a statement, “We renew our call for the establishment of a viable, independent and contiguous state of Palestine, on the basis of internationally agreed parameters, the pre-1967 borders, and with Al-Quds Al-Sharif (Jerusalem) as its capital”. Islamabad has always maintained that it consistently supports a two-state solution with the territorial integrity of the state of Palestine.

The US appeared as a peace broker in the Palestine-Israel conflict but not an honest peace broker.  This peace plan is conceived and written by President Trump’s advisor and son-in-law Jared Kushner. Kushner is publicly known for his affiliation with international Jewish lobby and Israel because of his idiosyncratic cult as a Jew by religion. He acts as a senior advisor in President Trump’s administration and seeks to secure support of the US Jewish lobby for the funding and electoral campaign of President Trump in US Presidential election which is scheduled in November this year. Therefore, this peace proposal appears more as a political tactic than a concerted effort to resolve this violent conflict.

The timing of announcement of Trump’s peace plan is very selective in its approach and political in its nature as it suits President Trump’s administration to generate new debate in US media and public opinion to deflect the ongoing domestic debate from the impeachment of the President.  This plan is officially announced two years after its public revelation by President Trump which shows domestic political considerations as a compelling factor in the announcement of this proposed peace plan.

Timing of announcing Trump’s peace plan also serves political interests of Israel’s long-time serving Premier Netanyahu. He is struggling at home to keep his office intact, especially after official indictment for bribery, fraud and breach of trust in corruption cases by the attorney general’s office in November 2019.  He has got a fresh mandate after being able to get victory in mid-term election to form government less than a year ago. This peace plan also serves domestic political interests of his party and government to reaffirm his firm commitment with Zionism and greater Israel.

This peace proposal serves the long-term strategic interests of the US-Israel nexus in the geopolitical arena of Middle East as well as political interests of their incumbent regimes. Historically, the international Zionist movement and the state of Israel have been able to garner support of great powers, mainly Great Britain in the form of Belfour declaration and USA in the form of strategic partnership accord, and they have proven instrumental in its success to establish and consolidate a mandated territorial unit as a sovereign and powerful regional state.  Instead of providing peace to the region, this peace formula will further deteriorate the regional security situation by fuelling the conflict due to its partisan approach.

About Ayaz Khokhar 20 Articles
The author holds an M. Phil in International Relations from Quaid-i-Azam University, Islamabad. He is an independent political analyst. His areas of interest are Trends in Geopolitics and Politics of South Asia

Print PDFOver the past few years, the South Asian region has witnessed profound developments and enhancements of cruise missiles.  This is primarily because of India’s aspirations for supersonic and hypersonic weapons. Evidence comes from how […]