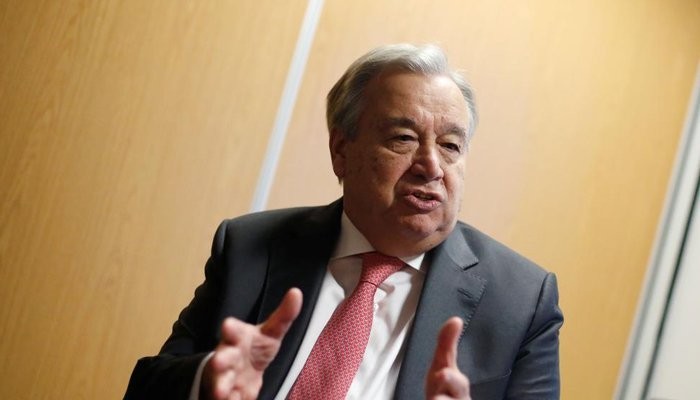 UNITED NATIONS: UN Secretary-General Antonio Guterres renewed his offer of good offices to de-escalate the tensions between India and Pakistan, reiterating his “deep concern” as hostilities between escalated Wednesday.

“His good offices remain available should both sides agree,” the UN chief’s spokesperson, Stephane Dujarric, said in response to a question at the regular noon briefing at the United Nations’s headquarters in New York.

The secretary-general has spoken to Pakistani Foreign Minister Shah Mahmood Qureshi this morning, the spokesperson said, and that he was also in contact with India at various levels.

“The Secretary-General is following with deep concern the current situation between India and Pakistan,” Dujarric said in the wake of reports that the Pakistan Air Force (PAF) had shot down two Indian aircraft and captured two pilots.

“He (UN chief) appeals to both sides to urgently take steps to lower tensions through meaningful mutual engagement and meet their responsibilities to maintain peace and stability in the region,” the spokesperson added.

His statement follows Prime Minister Imran Khan called for “better sense to prevail” and renewed his offer for dialogue with India.

Meanwhile, Pakistan’s Ambassador to the UN, Maleeha Lodhi, continued her contacts with the secretary-general’s office and other UN officials as well as key diplomats here, stressing the need for the de-escalation of tensions between the two countries and the resolution of outstanding problems through dialogue.

Print PDF Ansar Abbasi Published in The News on February 27, 2019 ISLAMABAD: The National Command Authority (NCA), which oversees the operationalcommand and control of the country’s nuclear arsenals and missile systems, is the toppolicy making […]

Print PDFThe World Economic Forum (WEF) had its annual meeting at the beginning of the new year i.e. 2020, as it has done every year. The Forum makes it possible for business, technology and national […]