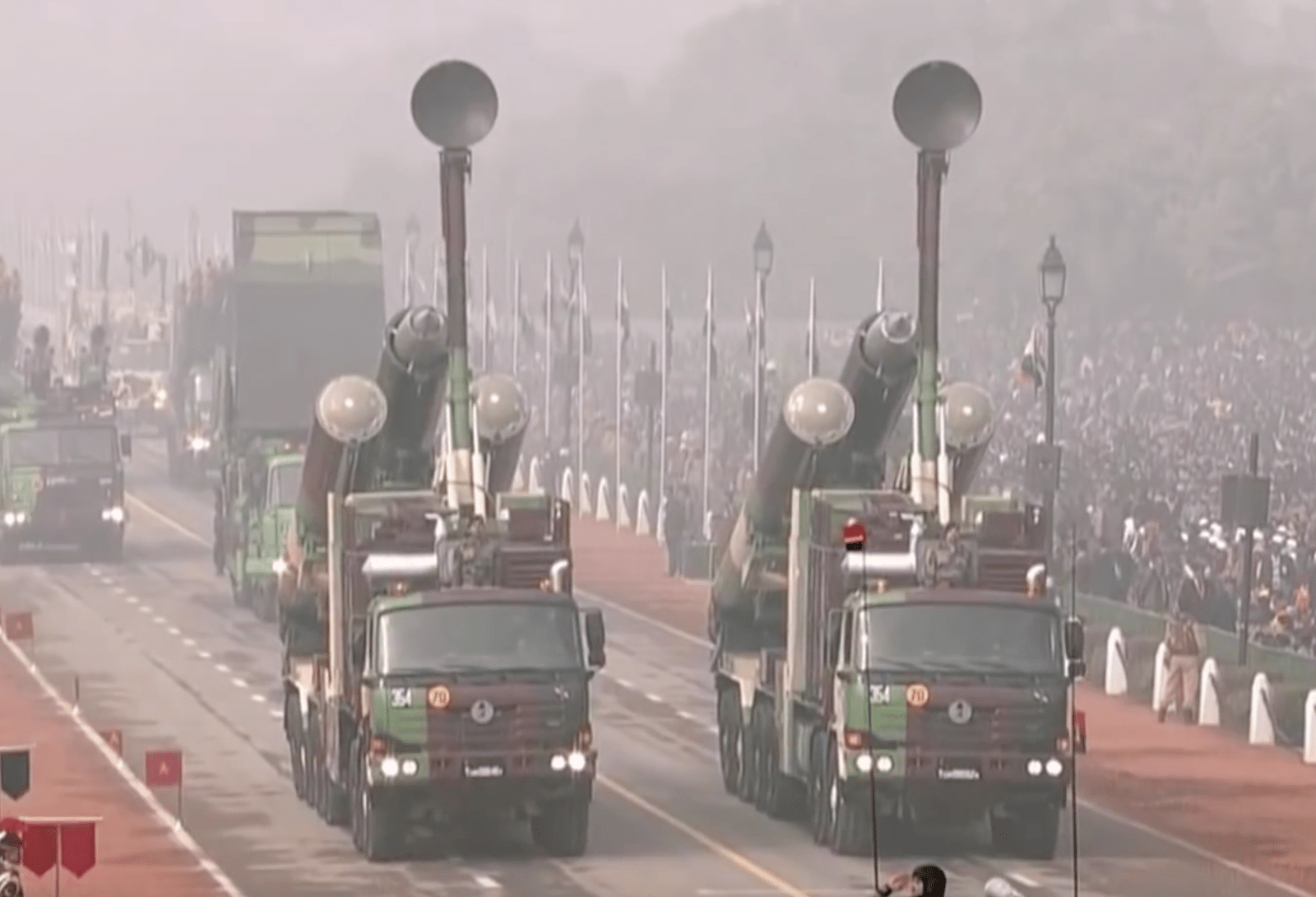 Ruled by the RSS/BJP government of Prime Minister Modi, India has become a fascist state with nuclear weapons. Leaders pursuing such an extremist, irrational and belligerent ideology pose a grave danger because they cannot be responsible custodians of nuclear weapons. This should be of extreme concern not only for India’s neighbours and the world but especially for the Indian people themselves. The Modi government’s irrational and irresponsible behaviour has already been on display and is likely to continue, driven by a false sense of invulnerability based on possession of nuclear weapons. India has, therefore, moved closer to unleashing Armageddon.

It was this irresponsible belligerence that led Modi’s India to test the limits of nuclear deterrence with Pakistan by attacking Balakot in February 2019. Following Pakistan’s swift but measured retaliation, India threatened further escalation by using its ballistic missiles and began deploying its nuclear armed naval assets. It was only the combination of Pakistan’s threatened matching response and international pressure that persuaded Modi to back down. While a major nuclear crisis was averted, Indian irresponsible behaviour did not cease. Modi claimed to have “called Pakistan’s nuclear bluff” and boasted of possessing the “mother of all nuclear bombs”. His ministers and party henchmen went further to threaten occupation of Azad Kashmir and Gilgit-Baltistan while also hinting at changing India’s nuclear posture, thereby implicitly threatening a preemptive nuclear first strike against Pakistan. The fact that such tactics secured a massive electoral victory for Modi in 2019 highlighted the Hindu chauvinist and fascist mass hysteria that he has created by using “fear and loathing” in the words of Pankaj Mishra, the well known Indian writer.

Encouraged by the mass appeal of such policies within India’s Hindu majority, Modi has gone even further by targeting Kashmiri Muslims under Indian occupation and the broader Indian Muslim minority population of 200 million people. In August last year, Modi revoked the “autonomy” granted to occupied Kashmir by the Indian constitution, allowed property rights to non-Kashmiris, divided and reduced the state into a union territory and placed the Kashmir valley under complete lockdown and curfew which has now lasted over 6 months, enforced by more than 900 thousand troops. Thousands of Kashmiris, including women and children, have been imprisoned alongwith the incarceration of Kashmiri politicians and civil rights activists, even those who have been pro-India in the past. Such draconian measures have been preceded by massive human rights violations in occupied Kashmir starting from Modi’s first term in office since 2014. These have not been just administrative law and order measures against a popular uprising but a vicious and brutal campaign of genocide and ethnic cleansing driven by Hindu fascism, aimed at changing the Muslim majority demography of occupied Kashmir.

Within India itself, Muslims and Muslim heritage have been under attack by Modi’s fascist policies ever since he rose to prominence in the BJP as the Chief Minister of Gujarat state. Following the Godra train incident in February 2002, Modi and his henchmen like Amit Shah, currently Indian Home Minister, unleashed a 3 month long Hindu pogrom against Muslims in which over 2000 Muslims were killed, their homes and properties destroyed and millions forced to flee. Modi to this day refuses to take responsibility for this massacre nor express regret over the incident.

In fact, after becoming Prime Minister in 2014, Modi has given a free hand to Hindu fanatics of his ideological mentor, the RSS, to victimize Muslims and other minorities. Vigilante groups of Hindu thugs have roamed the length and breath of India to accuse and punish Muslims for alleged cow slaughter or for eating beef. Muslims have also been targeted for marrying Hindu women while others have been singled out for forcible conversion to Hinduism even as they are accused of being Pakistani sympathizers or spies. Christians and Christian churches have not been spared either – a Pastor and his family were burned alive while recently a statue of Christ was forcibly pulled down.

At the official level, the BJP government has taken steps to eradicate or distort the Muslim period of Indian history and heritage of India. The most flagrant example is the Indian Supreme court decision to legitimize the destruction of the 16th century Babri Masjid. Other mosques in Varanasi and Mathura could meet the same fate. Muslim names of towns, roads and buildings have also been changed. Indeed, Indian history itself is being rewritten by expunging or distorting facts relating to the Muslim era as has been lamented by noted Indian historian, Romila Thapar.

The latest example of Modi’s fascism is the move to single out Muslims for denial of Indian citizenship and the need for them to prove their identity as Indian nationals. This is a clear example of the insidious attempt to impose the agenda of the RSS, that India must only be a land for Hindus and others, especially Muslims, who are projected as invaders, should be expelled. Several detention centers, which would be virtual concentration camps, are being built across the country to imprison Muslims whose nationality cannot be proven.

The protests in response to these policies, especially by young Muslims and truly secular Hindus, have been met by brutal repression by the police and RSS/BJP vigilantes. Muslim educational institutions like Aligarh University and Jamia Millia in New Delhi have been ransacked, while students have been attacked in their dorms and libraries. Just as American President Trump was being welcomed in India last month, a pogrom against Muslims was unleashed in Delhi by fanatical Hindu thugs aided and abetted by the police. While nearly 50 people were killed with hundreds injured and Muslim properties including a mosque were destroyed, not a single person has been brought to justice.

Just as in Hitler’s Germany, the majority Indian population either supports Modi’s fascist policies or has been intimidated into silence. State institutions, including the bureaucracy, judiciary, armed forces and even the media have been co-opted and turned into cowering sycophants. Mass hysteria has been built up by jingoistic rhetoric against Pakistan, demonizing Muslims and glorifying Hindu mythology together with calls for avenging imagined Muslim subjugation of “Hindu” India. Armed with nuclear weapons, such vengeance is now considered possible as Modi’s India will brook no opposition or restraint.

To a large extent, Modi’s pursuit of his internal and external agenda has been encouraged and facilitated by the growing Indo-US strategic partnership to contain China. This has not only prevented official western criticism of Modi’s domestic policies but has also enabled his unprecedented military build-up to impose Indian hegemony and destabilize regional stability in the process. The Indo-US Joint Statement issued after Trump’s recent visit to India amply demonstrates this reality. Apparently oblivious to the communal carnage raging in Delhi as this statement was being adopted, it describes India (and the US) as “vibrant democracies recognizing the importance of freedom, equal treatment of all citizens, human rights and a commitment to the rule of law”. In the military domain, the statement underscores the US view of India as a “net security provider”. No wonder Modi feels confident to pursue his fascist goals.

But the question remains whether and for how long can a fascist and belligerent Indian leader and his henchman be trusted with responsible stewardship of nuclear weapons? Whereas the US and its allies have consistently raised concerns about nuclear weapons falling into the hands of Muslim fanatics and terrorists, they do not seem to have such concerns about the Hindu variety. But as Modi’s fascist hordes grow in strength and confidence as does their nuclear arsenal, the threat of Indian irresponsible and irrational behaviour cannot continue to be ignored. Eventually, India’s internal differences that Modi has been stoking could tear the country apart. When that happens, he would be tempted to blame others such as Pakistan or China or both. In such a situation, it would be impossible to expect rational and responsible behaviour from a fascist nuclear weapon state. It is also true that for the sake of its security, Pakistan would not succumb to Indian nuclear or conventional blackmail. The international community needs to, therefore, quickly wake up to this reality about Indian nuclear fascism.

The Likely Collapse of the Global Economy

Print PDFThe novel virus, COVID-19, has stretched itself to the length and breadth of the world leaving not even a single facet of life unaffected. The Chinese province, Wuhan, was the initial stage decorated for […]

Print PDFToday, liberalism is in a severe crisis. Its various postulates are very pleasant to hear, yet they remain confined to academic halls and are not as readily absorbed by the people as the call […]