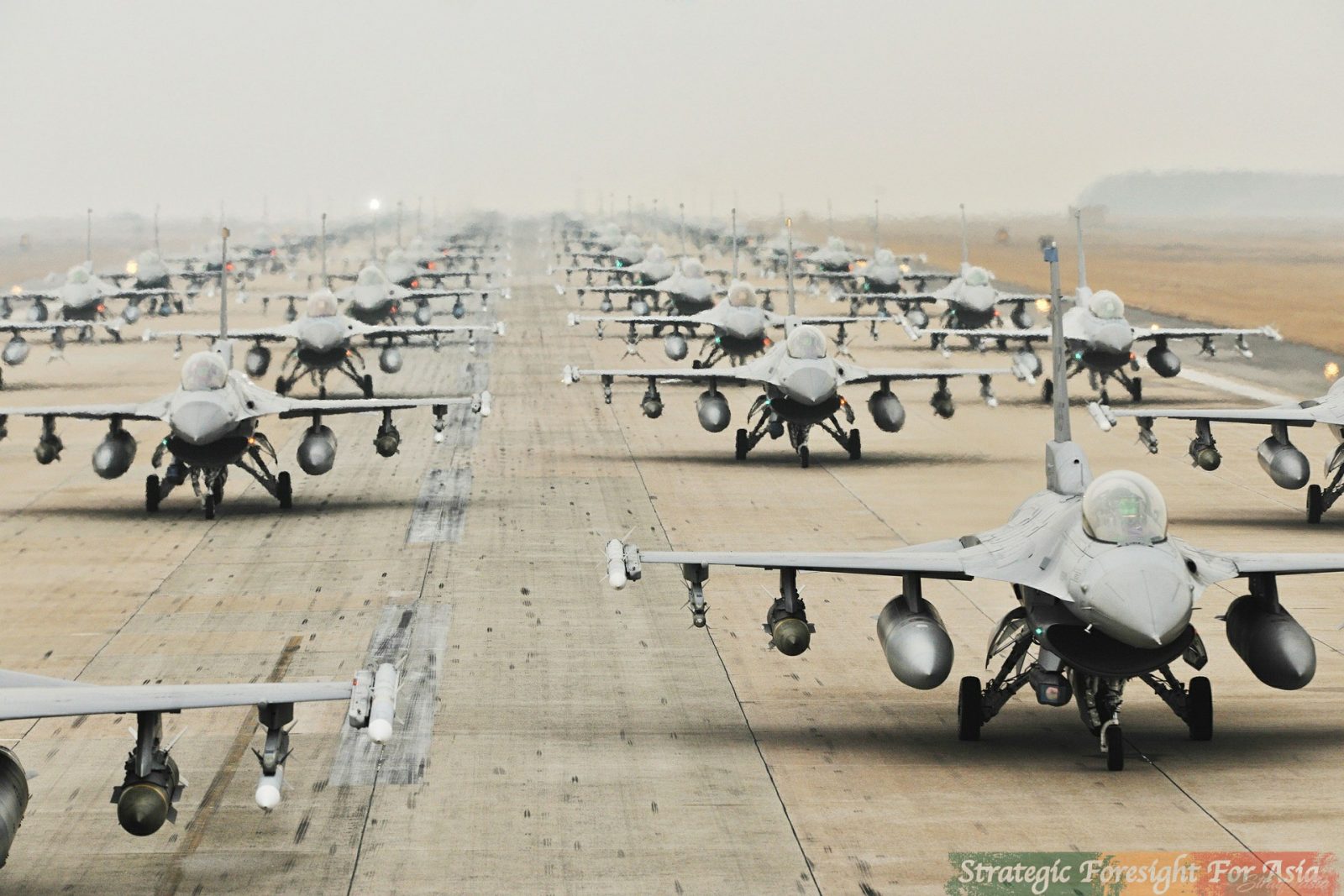 The Indian Air Force (IAF) in its recent press conference has once again asserted its claim of shooting down a Pakistan Air Force (PAF) F-16, in an aerial engagement that took place on February 27, 2019. India’s persistent claim with no credible evidence does indicate that India seems to have developed an ‘F-16 neurosis’ for reasons that are intrinsic to India’s strategic culture, and IAF’s continued fixation towards Pakistan’s F-16s.

Speaking at the media briefing on April 8, 2019, Air Vice Marshal R.G.K Kapoor showed slides and pictures taken from India’s airborne early warning and control system (AWACS) aircraft, but stated that “due to security and confidentiality concerns, we are restricting the information being shared in the public domain.” The two radar still images that were shown by the IAF does not provide a conclusive evidence of F-16 being shot down, as it cannot be substantiated “whether the images that were provided were taken from radar outputs on AWACS, from a ground station or other integrated air defense network node, or were created from data from one or more of those sources specifically for the presentation.” Instead of relying on the still images, if the IAF would have shared a video of the operation, it might have endorsed some of India’s claims. 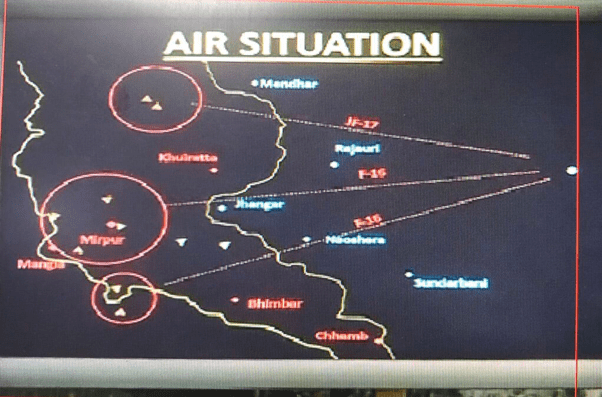 The IAF media briefing was primarily aimed to negate the claims made by an influential U.S. magazine Foreign Policy that contradicted India’s story of shooting down a PAF F-16 aircraft.

Citing senior officials from the U.S. Department of Defense (DoD), the magazine had stated that “the U.S. personnel recently counted Islamabad’s F-16s and found none missing.” This new evidence seems to have perturbed many in India, including the IAF, that is under pressure by the domestic and international audience to validate its claims of a successful surgical strike over ‘Balakot,’ and of shooting PAF F-16 aircraft.

IAF’s recent press conference, instead of providing convincing evidence in support of its claim of having shot a PAF F-16, relied on visual sightings of two parachutes seen by the Indian troops, and claimed that one was Abhinandan and the other one was the ‘F-16 pilot.’ Notwithstanding IAF’s fixation on F-16, there is a possibility of two or maybe three parachutes seen by people on the ground. This could be explained by a crash of SU-30 dual seater aircraft at the same time when the aerial battle was ongoing, and SU-30 were involved in the engagement as per IAF’s own account. Both the pilots seem to have died in this crash, which the IAF initially termed as technical, but most likely was a result of a missile hit from one of the PAF aircraft.

As per the IAF’s recent briefing, there was a gap of approximately one minute between F-16 and the Mig-21 aircraft being shot down. If this is true, it should have afforded sufficient time to the Mig-21 pilot to announce ‘splash’, which is a standard lingo used universally by all fighter pilots to keep the R/T communication to a minimum, while making sure that their other formation members, as well the ground controllers have complete situational awareness. The IAF claims that it only has a recorded voice of ‘locked,’ which could also mean that Abhinandan could have been locked by a PAF aircraft, and his own radar must have sounded alarm of the impending threat, but he didn’t have sufficient time to react.

After the Mig-21 was shot, India formally approached the U.S. protesting the ‘unauthorized’ use of F-16 aircraft in combat on Feb 27, 2019. Some Indian ‘experts’ have also accused Pakistan of misusing the U.S. supplied advanced medium range air to air missile (AMRAAM), AIM-120C against India, instead of using it against ‘war on terror.’ Reacting to India’s complaints, one senior U.S. DoD official stated that: “it would be incredibly naïve for us to believe that we could sell some type of equipment to Pakistan that they would not intend to use in a flight.” Moreover, the AMRAAMs are air-to-air missiles, and it would be ridiculous to expect that Pakistan would spend $ 650 million to buy air-to-air missiles and use it in air-to-ground mode against the terrorists’ hideouts.

In its recent press conference, IAF has also claimed that the PAF fired several AMRAAMs, but the IAF aircraft were able to take countermeasures. It was not clear how the IAF knew that these were AMRAAMs and fired by the F-16, and not any other missiles that could have been fired by JF-17s. By not allowing access to the video of the aerial engagement, the IAF may have concealed another embarrassing episode. Abhinandan’s No.2, who was supposed to provide cover to his leader, turned ‘cold,’ once he was informed by the ground controller about the presence of a significant number of PAF aircraft. He exited the combat leaving his leader at the mercy of JF-17s. This fact was also corroborated by reports that the ground controller was continuously calling Abhinandan to warn him about the threat, but either he ignored the calls, or his radio was jammed by the PAF. The PAF sources also confirm that Abhinandan came in blind, with no situational awareness, and therefore proved to be ‘sitting duck’ for the JF-17.

During this short battle, IAF also lost MI-17 V5 helicopter, which was not necessarily a result of friendly fire from the ground, but most likely an air-to-air missile from one of the own aircraft causing further embarrassment to the IAF. India, therefore, remains reluctant to release the entire audio/ video of the operation. If the IAF continued to mislead the world with what some Pakistani officials term as a story of ‘lies and deceit’, it is quite likely that PAF may respond with its own evidence consisting of the recording of R/T (radio communication) of the entire episode that includes the exchange of calls between the air and ground controllers and the IAF pilots.

The IAF has also claimed that Wing Commander Abhinandan has become the “first Mig-21 pilot in the world to shoot down an F-16 jet.” If Abhinandan has indeed achieved this feat then why is he not being produced in front of the media to explain his ‘bold and gritty counterattack’, and not being rewarded with a medal? On the contrary, the woman ground controller who was trying to warn Abhinandan of the threat unsuccessfully is being considered for a reward by the IAF.

The controversy over the F-16s is a diversion to cover IAF’s own weaknesses and mistakes. IAF enjoys significant numerical superiority but seems to have been outsmarted and outmanoeuvred by the PAF. If one has to compare the performance of the two air forces in the recent crisis, it can be seen that both IAF and PAF launched strikes against each other with a similar number of aircraft. IAF’s surgical strike failed to achieve its objectives and could not deliver a payload over the intended target, despite having the advantage of a surprise over its adversary; whereas, the PAF’s counter strike that was very much expected was able to achieve its intended objectives, besides additional success of shooting India’s two aircraft.

About Dr Adil Sultan 33 Articles
Dr Adil Sultan is a Director at the Centre for Aerospace and Security Studies (CASS) and co-founder of Strategic Foresight for Asia (www.strafasia.com). He can be reached at [email protected] Twitter @adilsultan.