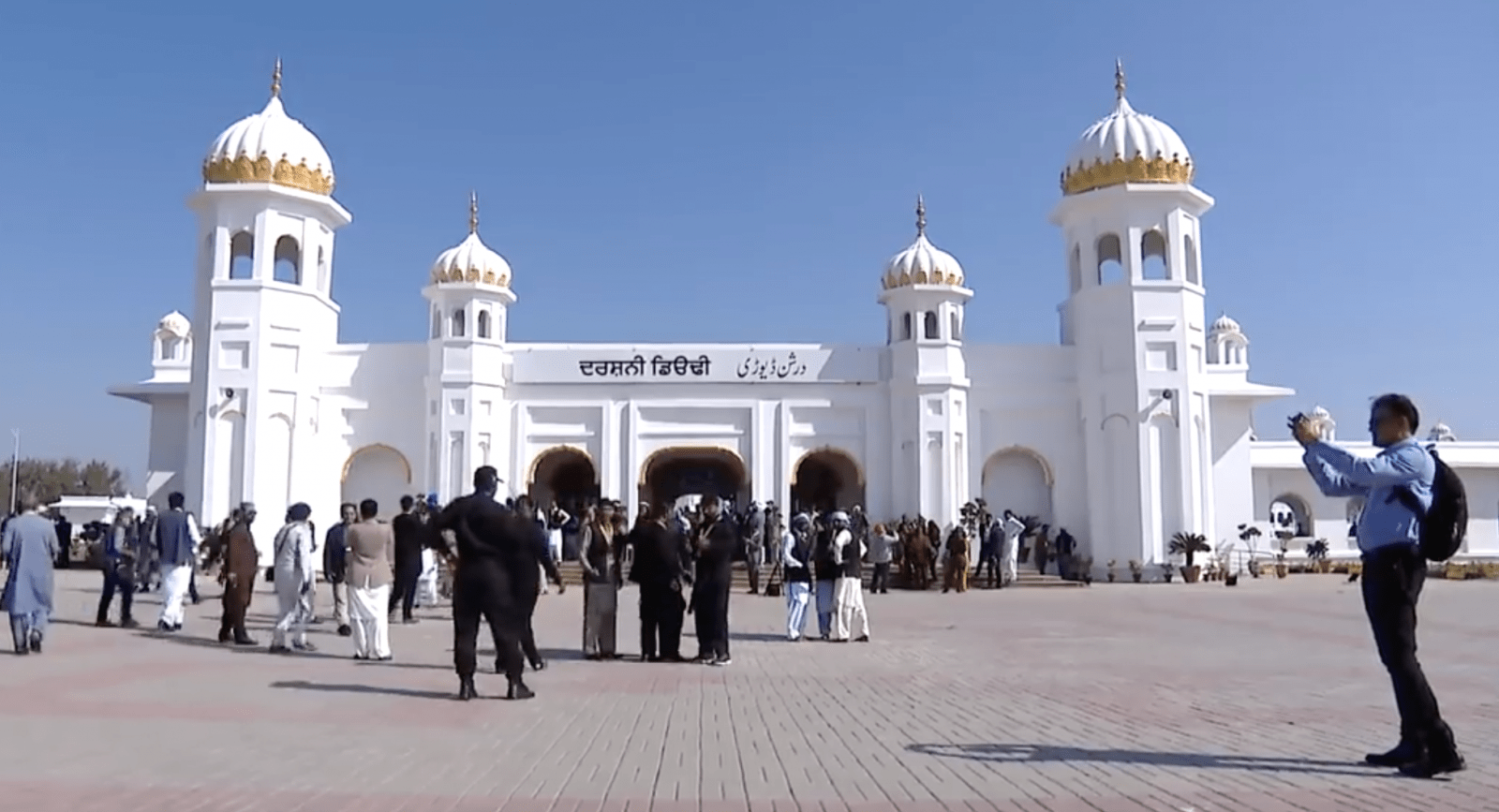 Inauguration of Kartarpur Corridor. On 9th November, Prime Minister Imran Khan inaugurated the Kartarpur corridor which enabled Sikh pilgrims to visit their second-holiest site without a visa. The inauguration was held two days prior to the 550th birth anniversary of Guru Nanak Dev, the founder of Sikh religion. The shrine is where Guru Nanak spent 18 years of his life and is his final resting place. The opening of this corridor would enable 5000 Indian Sikhs to visit the holy place daily. Moreover, on the initial day there was no requirement of a passport, the entrance fee of $20 was waived off and the pilgrims did not need to register themselves 10 days earlier, as would be generally required. Ultimately after 72 years, the distance that originally took around 125 kilometres was reduced to 4 kilometres. Not only was the opening of the corridor special for the Sikh living in India but it also served as a morale booster for the Sikh community residing in Pakistan.

The Indian delegation that came to Pakistan included the former Indian Prime Minister Manmohan Singh, who led the Sikh delegation as they crossed into Pakistan through the Corridor. Former Indian Cricketer Navjot Singh Sidhu was also present at the ceremony and applauded this monumental initiative. Interestingly, the Bollywood actor Sunny Deol who is known for doing anti-Pakistan films also attended the ceremony. A larger number of Sikh pilgrims from different states such as the USA, UK and Canada also arrived for the event.

The Indian side tried its best to make this initiative controversial, yet circumstances resulted into Modi himself inaugurating the corridor on the Indian side. At this moment, Modi was forced to praise and thank Imran Khan for this initiative. Before the first delegation from India set off, Modi addressed the Sikh community and lauded the opening of the corridor. The Indian PM stated, “I also thank Pakistan’s Prime Minister Imran Khan for understanding India’s wishes and turning Kartarpur into reality.”

The ongoing year has marked a new low in the already strained India-Pak relations. At a time when tensions were running high with a curfew still imposed in Kashmir, Pakistan took a colossal step. The US State Department also welcomed the initiative and gave a statement on the day it was opened. “The US welcomes the opening of a new border crossing between India and Pakistan, the Kartarpur corridor, US State Department Spokesperson Morgan Ortagus said in a video posted on her official twitter handle.

Under a bilateral protocol signed in 1974, the two countries agreed to facilitate cross-border visits to holy sites. The list included 15 sites in Pakistan and 5 sites in India, yet Kartarpur was not on the list. The initial discussion for the corridor began in 1998, yet it failed to precipitate any concrete results. However, the incumbent government of PTI was determined and the structure was finished in a record time of just 12 months.

This initiative is a milestone achievement for Pakistan. Firstly, it augments the fact that Pakistan wants peace in the region. While India is doing its best to erect and spread an anti-Pakistan narrative, the corridor highlights that it is Pakistan which is undertaking measures that would propagate regional peace. Pakistan has dispatched a message of peace as the Kartarpur initiative survived, despite events that signalled that the corridor could be a victim of the India-Pak tensions.

Secondly, Pakistan reasserted its position on Kashmir. Even though Pakistan did not call off the corridor despite the strained relations yet it reinforced its stance on the Kashmir issue. Imran Khan highlighted that it’s been 100 days since the Kashmiri people were placed under curfew. The Prime Minister urged his Indian counterpart that the Kashmir issue should be resolved for the betterment of the South Asian region. Moreover, the issue should be resolved while taking into consideration their right to self-determination. The Prime Minister also signalled that lifting the curfew could pave way for a dialogue between both of the states. Ergo, it becomes evident that opening the Kartarpur does not dilute Pakistan’s stance on the Kashmir issue.

Ayodhya Verdict.       Ironically, the day Pakistan opened the door for Sikh pilgrims to visit their holy site also encompassed the verdict passed by the Indian Supreme Court in favour of Hindu hard-liners by allowing them to build a temple in place of Babri Masjid, a 16th century mosque at Ayodhya Land. The dispute over the land dates back to decades as certain Hindu segments have claimed that the mosque was built on the birthplace of Ram, a Hindu deity. The mosque was demolished by Hindu extremists in 1992, killing around 2000 people, the majority of whom were Muslims.

The Supreme Court allowed the building of a temple at that site despite acknowledging that there was no Hindu temple beneath Babri Masjid, thereby dismissing the claims that the mosque was built on a Hindu temple. Muslims on the other hand were given a 5-acre land as compensation for building the mosque. Indian right-wing militant organizations, such as Vishwa Hindu Parishad, asserted that the verdict on Babri Masjid is not the end, rather it is the beginning and we should now continue with other mosques as well.

The Babri Masjid was in possession of the Muslim community for centuries and there was no legal dimension to give it for the construction of a temple. The narrative that the mosque was built over a Hindu temple was advocated so staunchly by Hindu hardliners that people are not willing to believe that it was a myth, despite the Supreme Court stating it openly.

At a time when Pakistan extended the 5-acre land of Kartarpur to 42 acres and spent millions on the initiative, the Indian Muslims were ordered to accept the inexplicable decision given by the Indian Supreme Court. Hindu hardliners even harassed Sikh pilgrims coming back from Kartarpur at this occasion. There are chances that this precedent might invoke other extremists to further squeeze the level of toleration for minorities. Vinay Katiyar, a member of parliament for the ruling Bharatiya Janata Party (BJP), told the media, “There is not much difference between Taj and Tej [Mandir]” referring to a claim made earlier that Taj Mahal was built after demolition of a Hindu Temple. He further added, “Taj Mahal will be converted into Tej Mandir soon.” These claims reveal the level of unacceptance for Indian Muslims that is intensifying in India with every coming day. On the contrary, in April 2019, the Pakistani government announced that it would be re-opening the temples that have been closed since partition in 1947.

Such judgments will further sow the seeds of hatred and violence in India, as the decision was rejected by the Muslim community of India. In the long run it will be the focal point of the Hindu-Muslim tensions paving way for religious polarization. This can be proven from the fact that after the judgement, internet facilities were cut off in Aligarh where a large number of Muslims reside. The rationale of choosing the same date for this controversial judgment was to divert the debate towards this issue and avert attention from the Kartarpur initiative. On the contrary, this attempt did not bear any fruit and the Kartarpur initiative was appreciated widely.

Conclusion.     This corridor did not break the ice between India and Pakistan, yet it made it clear who actually wants peace in the region. Although the ceremony at the Indian side attempted to take equal credit, the actual credit goes to Imran Khan for making it possible as it could not have materialized without the firm willingness of the Pakistani government. With this initiative Pakistan has indeed manifested the statement given by its founding father Muhammad Ali Jinnah, “You are free; you are free to go to your temples. You are free to go to your mosques or to any other places of worship in this State of Pakistan. You may belong to any religion, caste or creed—that has nothing to do with the business of the state.”

Meanwhile, the so-called secular India is ostracizing its Muslim community. When prominent Muslim personalities raise their voices against this oppressive behaviour, they are labelled as Neo-Jinnah by the ruling party in order to silence them. Indeed the atrocities that have been executed on Kashmiris are now spreading towards other Indian Muslims by the Hindutva republic.

SCO and Its Prospects for Steering Peace and Stability

Print PDF In a speech on 11th September 1990, President George H.W. Bush coined a new phrase which he termed as a New World Order. The concept was in regards to terminating the Cold War […]

The Operability of Non-Stealth Fi …by Ahmad Ibrahim10 hours ago