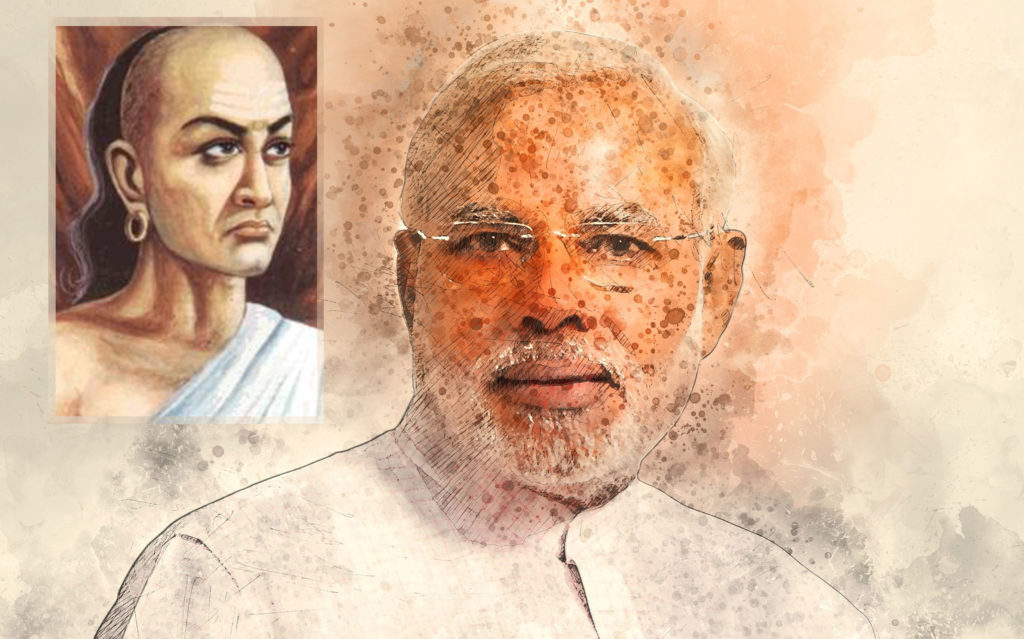 Kautilya, also known as Chanakya, has been recognized as a statesman and classical Indian philosopher of political realism. He presented a comprehensive theoretical framework of inter-state relations and foreign policy, knowns as the Mandala Theory in his work Arthashastra, which has deeply influenced contemporary Indian strategic culture and regional domination strategy. Written around 300 BC, it explains the entire course of state formation and the conduct of foreign policy through war and diplomacy to maximize the power of the conducting state.

Kautilya explicated maximization of national power through material economic strength gained by conquering territories adjacent to the ambitious state; this was seen as a prerequisite for regional domination, the ultimate foreign policy objective of a state. He was advisor and minister to Indian king Chandragupta Maurya who established a vast centralized Hindu kingdom in India on the former’s advice. Kautilya explained that the best strategy for protection and defence of state was regional expansion, and saw neighbouring states as perpetual enemies because of conflicting geopolitical interests. This article is written from the historical perspective and looks at how Kautilya’s classical realist thought has influenced contemporary Indian strategy?

As a political advisor and minister of Indian king Chandragupta Maurya, Kautilya sought unification of India through the acquisition of military might and economic strength. He advocated merciless political decision-making to confront the challenges of the given period. India was facing severe attacks and military encroachments from the descendants of Alexander the Great and the Persian Kings during his reign. Adhering to Kautilya’s philosophy, he unified India into a strong centralized state through the conduct of muscular foreign policy.

Under the Mandala framework, Kautilya projected kingdoms or states as a series of adjacent or interconnected circles and described their relationship to each other. He classified these states into four categories. The ambitious state was Vijigishu, which was placed at the centre of the circle. The others were Ari (the natural enemy state with a contiguous territory to the former), Madhyama (the regional power having adjacent borders with both Vijigishu and Ari), and Udasina (the extra-regional superpower, lying outside the circle of states). Based on this classification, states were categorized as enemies, friends, allies and neutral states in an international system. War, diplomacy and foreign policy were conducted accordingly.

Enemy states, Ari, were divided into two categories, the natural and the artificial, on the basis of geography and psychological perception. Ari-Mitra and Ari Mitra-Mitra were considered as natural allies of the enemy, thereby making them natural enemies as well. Further, Parshnigrah and Parshnigrahasara were identified as potential enemies which could attack Vijigishu from the rear flank as the latter expanded; thus, both the former were classified as its artificial enemies.

Kautilya categorized friendly states as natural allies and artificial ones; these, known as Mitra and Mitra-Mitra, were geographically adjacent to the natural enemies and were considered friendly to Vijigishu. Akranda and Akrandsara were conceived as potential allies and friends of Vijigishu, owing to their geographic proximity to Parshnigrah and Parshnigrahasara.

To protect the interest of Vijigishu and establish a favourable regional order, Kautilya advocated pursuing a balance of power by means of both self-help and alliances. If we apply the Mandala framework onto current Indian strategic thinking and foreign policy behaviour, what is seen is revealing. Similar to the Kautilyan conception, India has conceived Pakistan as its natural enemy and tried to sabotage it by using strategies of conventional military preponderance, nuclear deterrence, limited war Cold Start, and surgical strikes; all are coercive security policy mechanisms.

Under Modi’s government, this coercive approach intensified towards Pakistan. India tried to isolate the latter by cancelling foreign secretary-level bilateral talks in 2014. It also boycotted the SAARC Islamabad summit 2016, attempting to postpone it by influencing regional states to abstain from participation in it. Militarily, India increased skirmishes across the Line of Control to engage Pakistan in a two-front war. The arrest of Kulbushan Yadav, a serving Indian Navy officer from Pakistan, is another manifestation of India’s sub-conventional warfare.

Historically, India has tried to coercively manoeuvre its neighbours in South Asia either by use of force or its projection. It perceives Afghanistan and South East Asia as its natural allies while it sees the Middle East as a potential ally region. India had asserted itself in the neighbouring states through the invasion of Kashmir in 1948, the annexation of Sikkim in 1975, and aggression against Nepal, Sri Lanka and Bangladesh during the 1980s. India forced Bangladesh for a border settlement treaty immediately after its independence in 1971. During the post-Cold War era, India tried to military suppress freedom movement in Kashmir through the use of force, using a counterinsurgency (COIN) strategy under AFSPA which backfired.

After 9/11, the ongoing military role of India in Afghanistan has created debilitating security implications for Pakistan. India signed a strategic partnership agreement with Afghanistan in 2011, which allowed it the privilege to have military bases operating near the Pakistan-Afghanistan border.

Domination of the regional order has become the cornerstone of Indian security and foreign policy. India has signed a number of strategic partnership agreements with important countries in non-contiguous regions, including Afghanistan in South Asia, the UAE, Qatar, KSA and Iran in the Middle East, and Vietnam in South East Asia. Indian expansion in SCO and ASEAN, along with SAARC, is another manifestation of the geographic expansionist approach towards securing its national interest, and which is the core theme of Kautilyan foreign policy. India’s strategic interest for the establishment of a favourable regional order in its neighbourhood has dire security implications for Pakistan as it is an existential challenge to the latter’s security and territorial integrity.

The author is an independent researcher and South Asian affairs analyst.

Print PDFIndian Union Budget 2020-21 worth 2.9 Trillion US $ was announced on 1st February 2020. With the economy hitting a six-year low GDP growth, Union Finance Minister Nirmala Sitharaman presented a budget that focused on raising the purchasing power […]

India-Pakistan Rapprochement and the Quest for a Comprehensive Security

Print PDFAfter almost a decade of ‘ugly instability,’ South Asia is once again moving towards a period of ‘relative stability that could potentially lead to the resumption of a dialogue process between the two regional […]