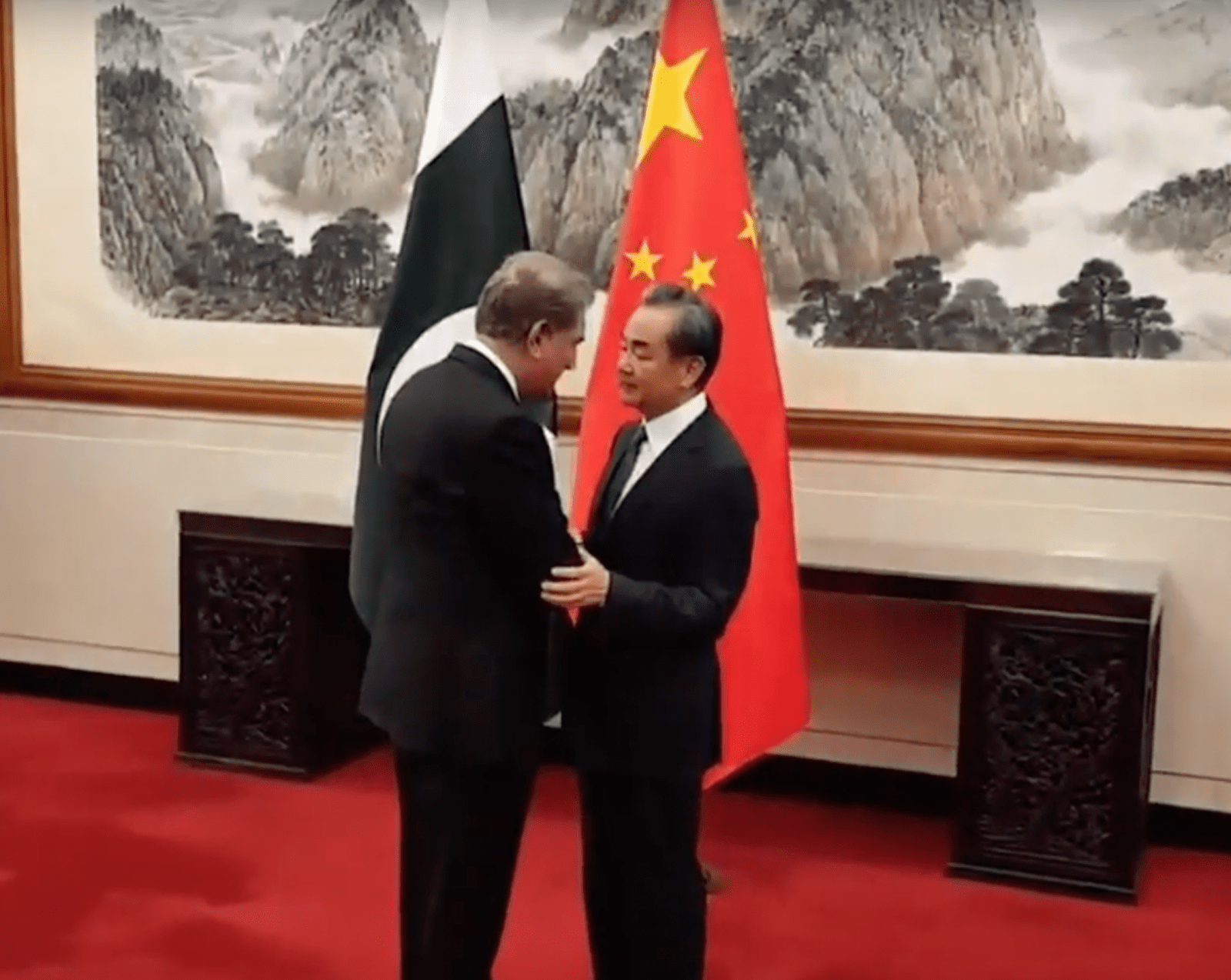 India has clamped down the special status of Jammu and Kashmir from a semi-autonomous region into two separate union territories through a political and constitutional maneuver by abrogating article 370 of the Indian constitution. This step of the BJP government has changed the status quo policy that India adopted on Kashmir in the past under the ambit of UN resolutions, which spell Jammu and Kashmir as internationally recognized disputed territory. Indian unilateralism in Kashmir is a violation of these UN resolutions and the commitment to the people of Kashmir. This move of Modi’s government has exposed India’s expansionist agenda to consolidate its control on Jammu Kashmir through communal division and demographic engineering. Modi’s government has increased the alienation of the people of Kashmir through this action. Pakistan has extended its diplomatic and moral support to the people of Kashmir while framing a diplomatic and political response to India.

Pakistan has given measured diplomatic response to India’s aggrandizement agenda on Kashmir  to exert international pressure on India by internationalizing the dispute as a grave humanitarian situation. Important decisions were taken in National Security Council (NSC) meeting held under the leadership of Prime Minister Imran Khan after India’s abrogation of article 370.  Pakistan has decided to down grade diplomatic relations and suspend trade with India. Pakistan has further expressed its distaste to this Indian action by indicating a will to revise existing bilateral treaties in order to revert status quo relations with India. The Prime Minister has instructed Pakistan’s army to maintain vigilance along the line of control, de facto international border, between Pakistan-India because of Indian military threat.

Pakistan’s options are limited to diplomatic and political maneuvers against India because war is not a rational choice. Pakistan has registered its protest by taking symbolic political and diplomatic measures which will send a strong message to Kashmiris and the international community that Pakistan stands firm on its Kashmir policy in solidarity with the Kashmir freedom movement. Measures taken in NSC meeting will have a deep psychological and political impact in shaping Pakistan’s narrative on the current situation in Kashmir at an international level.

Pakistan’s decision of downgrading diplomatic ties and suspending trade with India will have a significant impact because of the developments between the nuclear powers of South Asia. Such decisions are usually taken during wartime between arch-rivals. The international media is giving them massive coverage which is the main source to sensitize international community through influencing public opinion about this development. Pakistan-India tensions will increase in the coming days due to an ongoing curfew and the security situation in Jammu Kashmir.

India has reserved 24 seats for Azad Jammu Kashmir region (affiliated with Pakistan) in Indian union territory which reflects the future trend of India’s provocative actions and preemptive strategy against Pakistan. Such expansionist approach of India is highly destabilizing for regional and global security because it will fuel more hostilities between Pakistan and India. India is not ready for a dialogue on Kashmir due to its weak diplomatic position under UNSC resolutions which support the right of self-determination for the Kashmiri nation. Therefore, India has resorted to violence in Kashmir in order to curb the freedom movement in the guise of national security. India wants to control and divide occupied Kashmir. Therefore, India has divided Jammu Kashmir into two separate administrative units including Hindu majority Ladakh and Muslim majority Jammu Kashmir as union territories along communal lines.

India wants to divert attention of the international community from the human rights violations in Kashmir through the use of cluster bomb on line of control by portraying the entire regional situation as India’s internal national security problem and Pakistan-India bilateral conflict. The international community is also not interested in the solution of the Kashmir issue but they want to arbitrate on this issue between India and Pakistan in order to avoid direct military confrontation and its escalation on the post-Pulwama spat pattern because of the bilateral nuclear dimension. India is trying to deflect that pressure through the use of violence, including cluster bombs at LoC to show its seriousness towards keeping Kashmir as a bilateral issue.

Narendra Modi contested the 2019 election in India on the issue of changing the special status of Kashmir and settlement of non-Kashmiri Hindus in Jammu and Kashmir as the agenda of BJP’s manifesto. This narrative is materialized through revoking article 370 and 35A in order to alter the special status of Kashmir. Therefore, the security situation is at high alert in the Jammu Kashmir valley. BJP wants to seek majority in the Kashmir assembly through the settlement of non-Kashmiris in Jammu Kashmir, which is India’s planned strategy of demographic engineering in Kashmir.

The 5th August plan of India’s military concentration and increase in troop build-up in Jammu Kashmir reflected the country’s preemptive strategy to deal with any uneven situation. Kashmiri leadership has strongly expressed their opposition to any development seeking changes in the demographic and constitutional status of Jammu Kashmir. Indian nationalist Kashmir leaders have opposed this proposal of to annul article 370. BJP government has adopted suppressive policies in Kashmir to achieve this objective.

A curfew is imposed in the valley after India’s stringent measures for evacuation of Amarnath Yatra pilgrims and foreign tourists from the valley which has created panic in the region. People are facing massive paramilitary operation in the valley which will worsen the situation in the coming months by creating a grave humanitarian crisis as blatant human rights violations are under progress in Jammu Kashmir.

Pakistan has preempted signs of Indian aggression and the foreign minister has written a letter to the UN Secretary General to register Pakistan’s apprehensions on India’s use of cluster bombs on LoC and HR’s violations in the valley. Civilian citizens are targeted in this attack which is a violation of humanitarian law. This trend reflects India’s frustration and attempt to create a likely scenario of military crisis on Pakistan’s border through any false flag operation to deflect criticism on Kashmir. India wants to create diplomatic leverage for it through such staged drama to pressurize Pakistan and scuttle international pressure on Kashmir.

NSC meeting and declaration reflected a responsible approach of Pakistan towards the situation in Jammu Kashmir. Indian intentions are clear and if India takes further practical steps to repeal the special status of Kashmir and curb Kashmiri resistance through use of force, it will increase problems for Pakistan. The Kashmir issue has no military solution but if Indian oppressive policies continue in Jammu Kashmir, it will fuel sentiments of non-state forces in Pakistan, India, Bangladesh and Afghanistan to respond to Indian aggression through violent means which can pollute the indigenous Kashmiri peaceful political movement. It can also create a regional security situation of cross border movement in South Asia which will have perilous security implications. Therefore, a holistic approach is required to deal with this situation.

USA, Russia and China have emphasized to Pakistan and India to solve the Kashmir issue peacefully. So, in any future conflict scenario, Pakistan will need strong brinkmanship to deal with the situation because of limited international support on the issue. Pakistan only has diplomatic options on Kashmir policy, while India is emphasizing on a military option in Kashmir and deflect international pressure by creating confrontation. India has stated the policy option of a ‘military standoff’ in order to exhaust the weak economy of the opponent which cannot bear the cost of such a crisis. In the past, Indian military doctrines have repeatedly emphasized on the need for developing standoff capabilities in order to deal with any emerging security challenge from Pakistan.

The resistance of Kashmiris to the Indian army’s atrocities in IOK will create more impact than the response of Pakistan and China on this development. Pakistan must individually discuss the Kashmir issue with UNSC permanent members before calling a UNSC meeting and UNGA session. US considers Kashmir as dispute between Pakistan and India but it will not use its influence for the implementation of UNSC resolutions. The US wants a bilaterally negotiated resolution of Kashmir between Pakistan and India whose chances are bleak in the given circumstances.

At the societal level, Pakistan must give the leading role to the Kashmiri diaspora living abroad in Europe and USA to highlight the Kashmir issue at an international level. At the state level, Pakistan must develop a bilateral mechanism in the shape of contact groups to keep update major power capitals about the erupting human rights situation in Jammu Kashmir.

India has developed strong military standoff capabilities and has expressed it as their strategic tool in Indian land warfare doctrine, 2018. They want to pressurize Pakistan by creating any situation of military standoff and crisis with Pakistan on the international border or at the LoC as a lever to maneuver the latter’s Kashmir policy. Pakistan needs to maintain military readiness at high alert to deal with any action of Indian aggression. But most pressing matter is to bring clarity in Pakistan’s diplomatic strategy on Kashmir policy. Pakistan needs to adopt multilateral diplomacy as long term policy tool on Kashmir because diplomacy cannot work as an offensive move rather it operates as a long chain of small and consistent maneuvers to garner a favorable environment for operationalizing state policy in an anarchical international system.

Print PDFAfter a protracted stay of 17 years, the United States has decided to withdraw and is in the process of negotiating a ‘Peace agreement’ that may not necessarily lead to a long term peace […]

Print PDF Uzbekistan is one of Afghanistan’s smallest neighbours, with a much smaller population compared to Pakistan or China, and a very short border. But it is playing an outsized role in ongoing negotiations to […]

The Weaponization of Outer Space and the International law

Print PDFToday, the utility of the satellite-based objects for civilian and military activities has increasingly grown leading to an expansion of space programs and an ever-augmenting militarization of outer space. Likewise, the outer space has […]

Syrian Conflict: A Decade of Figh …by Sumayya khalil17 hours ago

Hong Kong: A Year After the Extra …by Noor Ul Huda1 week ago