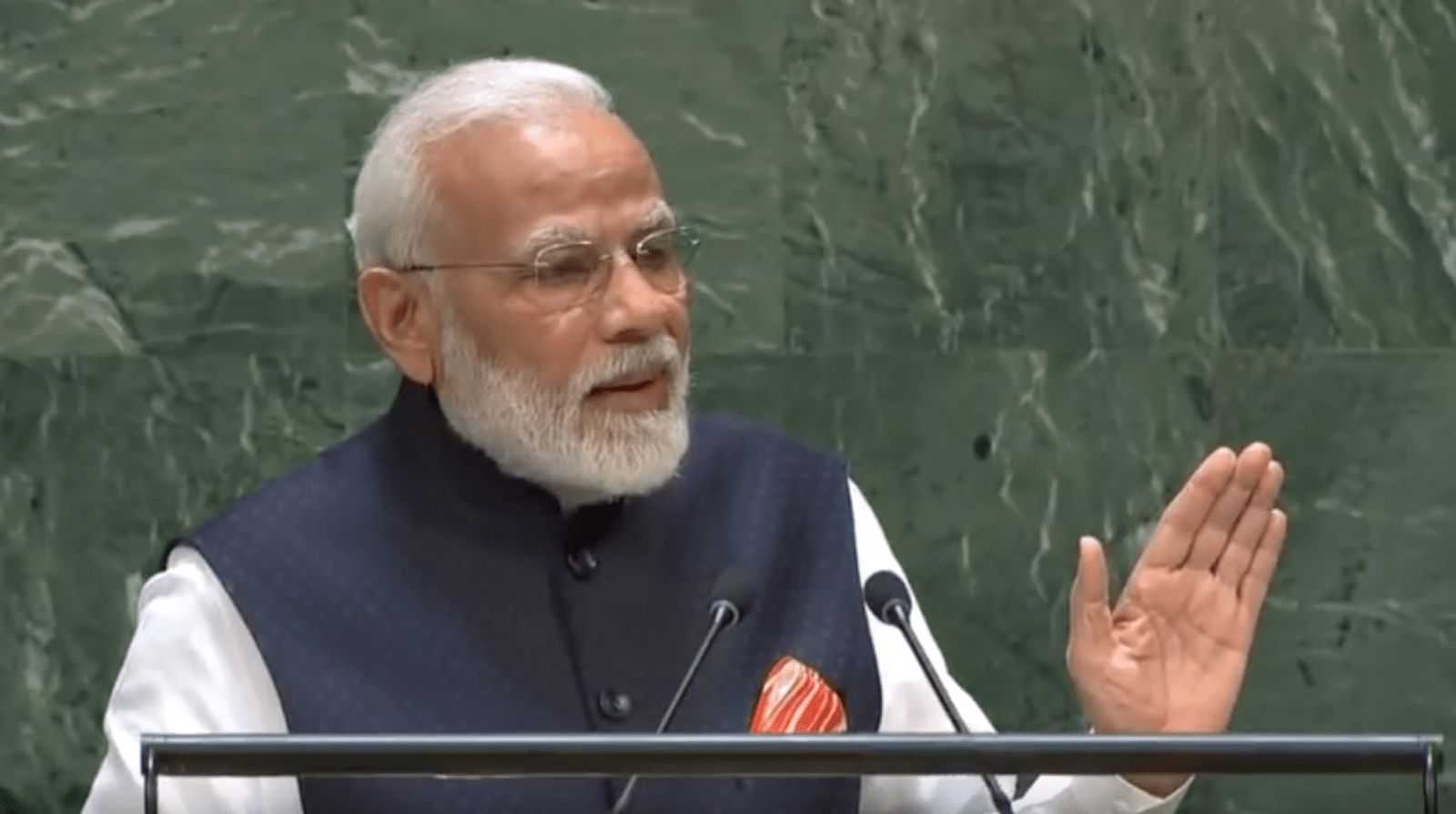 India’s aggression in Kashmir did not go unnoticed. On the 15th of August, alongside hundreds of protestors, I demonstrated outside the Indian High Commission in London on the constitutional overstep and potential humanitarian genocide. Pakistan critiqued Modi’s cabinet revoking Kashmir’s special status on the 5th of August as a violation of international law – while the BJP government had to justify its revocation of Article 370 of the Indian constitution to domestic opposition. Despite the resistance, the decision still stands. On an international front, the UNSC meeting on the day of this protest, saw the matter brought up for discussion at the closed-door meeting in New York. Later to news reporters, the Chinese Ambassador Zhang Jun echoed the statement of UN Secretary General Antonio Gueterres, both making an appeal for “maximum restraint” from Pakistan. While India’s crafty manoeuvres of ascension and descent vis-à-vis Kashmir have been presented as a matter of domestic policy, the global request for Pakistan to show restraint is oddly reminiscent of a similar event in Indo-Pak parity.

The year was 1998. The 13th of May. India had conducted its second set of Peaceful Nuclear Explosions – after a 24-year hiatus – a muscle-flex by the newly elected BJP government of Atal Bihari Vajpayee. India’s nuclear posture was evident in the aggressive rhetoric of then Deputy Prime Minister L K Advani, who signalled to the changed strategic balance of the region and openly threatened Pakistan’s position on Kashmir. What was the international response towards Pakistan? Restraint. Pakistan should exercise “maximum restraint” and occupy the “moral high-ground” – by not testing. Just like the UNSC meeting in August, the G7 summit was scheduled to meet in Birmingham on the 15th of May 1998, two days after the tests, where Pakistan was assured by leading powers that India would be severely reprimanded and sanctioned. It wasn’t. The rebuke was lukewarm at best. This muted response from the dominant normative order, as we have come to know, was a betrayal that led to Islamabad feeling diplomatically isolated and insecure – a response that led to Pakistan conducting its own nuclear explosions on the 28th of May 1998. The rest as we know, is history. In one swoop, Pakistan’s decision towards armament reduced the power asymmetry between the neighbours, restored the strategic regional balance and established the country as a sovereign nuclear power.

Imagine if the country had exercised restraint; imagine for a moment, the events of Kargil, Twin Peaks and Pulwama taking place with an asymmetrical bilateral relationship, an asymmetry prevalent due to Islamabad’s strategic restraint. The odds would have never been in our favour. Defying the dominant normative order of Western hegemony in 1998, has so far sufficed its purpose. The country is still a US war-on-terror ally, an economic partner to China and the only Muslim nuclear power. Considering the circumstances, we must question whether the PTI government should follow a different path by complying with international calls for peace? The answer – is yes and no. With regards to refraining from nuclear escalation and posturing, yes, Pakistan should hold on to that card for the time being – we should prevent every possibility of diplomatic isolation and status devaluation, not to mention humanitarian genocide. We don’t want a war. But with regards to rolling over and turning-the-other-cheek to India’s regional sabre-rattling and humanitarian violations, no, Pakistan cannot simply chalk this up as a failure of statecraft. It must, first and foremost, realise that Islamabad is not embroiled in an ethno-religious struggle against India – but one of regional economic dominance for the last three decades.

Indeed, India’s ascension post-liberalisation in 1991, played an important role in the 1998 muted response, revealed an India-friendly US in the Kargil conflict and led to the signing of the US-India Civil Nuclear Deal of 2005, which granted exemptions to the latter but not to Pakistan. Money talks, as the truism goes, and it speaks a language that needs no interpretation. Indeed, despite Pakistan’s support for US forces during the Cold War, the political cost of training and accommodating Afghan refugees and subsequently supporting the US-led war on terror, the country has rarely maintained backing in times of peace. The after effects of this economic weakness are incredibly prevalent today, where the nation’s three prominent allies, USA, China and Saudi Arabia, have refrained from intervening against India in this Kashmir conflict due to their own economic interests. The revoking of special status for Indian-occupied Kashmir leads to the divided territory becoming an established political region – demanding the LOC to be turned into a hard-border – an act that would invariably benefit China’s belt and road initiative. There have been no military interventions, no trade embargos, no economic sanctions and no diplomatic isolation for India, where the US has ignored Pakistan’s protests, while eagerly developing its bilateral economic relations with the world’s sixth largest economy. And when Saudi Arabia refuses to sign petitions against the Uyghur genocide in Xinjiang, what hope does Pakistan have of securing their support against humanitarian violence in Kashmir? None whatsoever.

What must an economically-weak, militarily-restrained and strategically-isolated Pakistan do in this circumstance? The nuclear posturing would backfire, as it did in Kargil and every subsequent skirmish thereafter. The diplomatic assertions would fall on deaf ears, the peers prioritising India’s economic clout over what is mostly viewed as Pakistan’s self-serving virtue-signalling. The only rationale Pakistan can adopt, is that of sovereignty – to landlock its current territory by securing the LOC in Kashmir, the Radcliffe Line, the Durand Line and the Iran-Pakistan barrier as hard borders. Once the international borders are locked, the focus must solely be on domestic policy – not foreign policy – in particular, how to maintain Pakistan’s geostrategic integrity considering India’s rise to power. Only by focusing on economic parity can Islamabad’s foreign policy legitimise Pakistan’s status as a regional power and situate the nation as a regional counterpoint vis-à-vis India. It would bode well for the PTI government to consider the revoking of Article 370 and 35A as a wakeup call, rather than an affront to Pakistan’s dignity – a consideration that can be channelled towards harnessing the country’s yet fully untapped means of material power – the economy.

About Ali Arsalan Pasha 2 Articles
The author is the Director of The Oxford Atlas and a board member of The Oxford Guild. He currently researches for the Computational Propaganda project at the Oxford Internet Institute and specialises on Pakistan’s foreign policy and security strategy. He tweets @aliarsalanpasha (twitter.com/aliarsalanpasha).

Print PDFReuters And Web Desk On Feb 28, 2019  published by ARY Last Updated Feb 28, 2019     HANOI: U.S. President Donald Trump said on Thursday he hoped the decades-long conflict between India and Pakistan will be coming to an […]