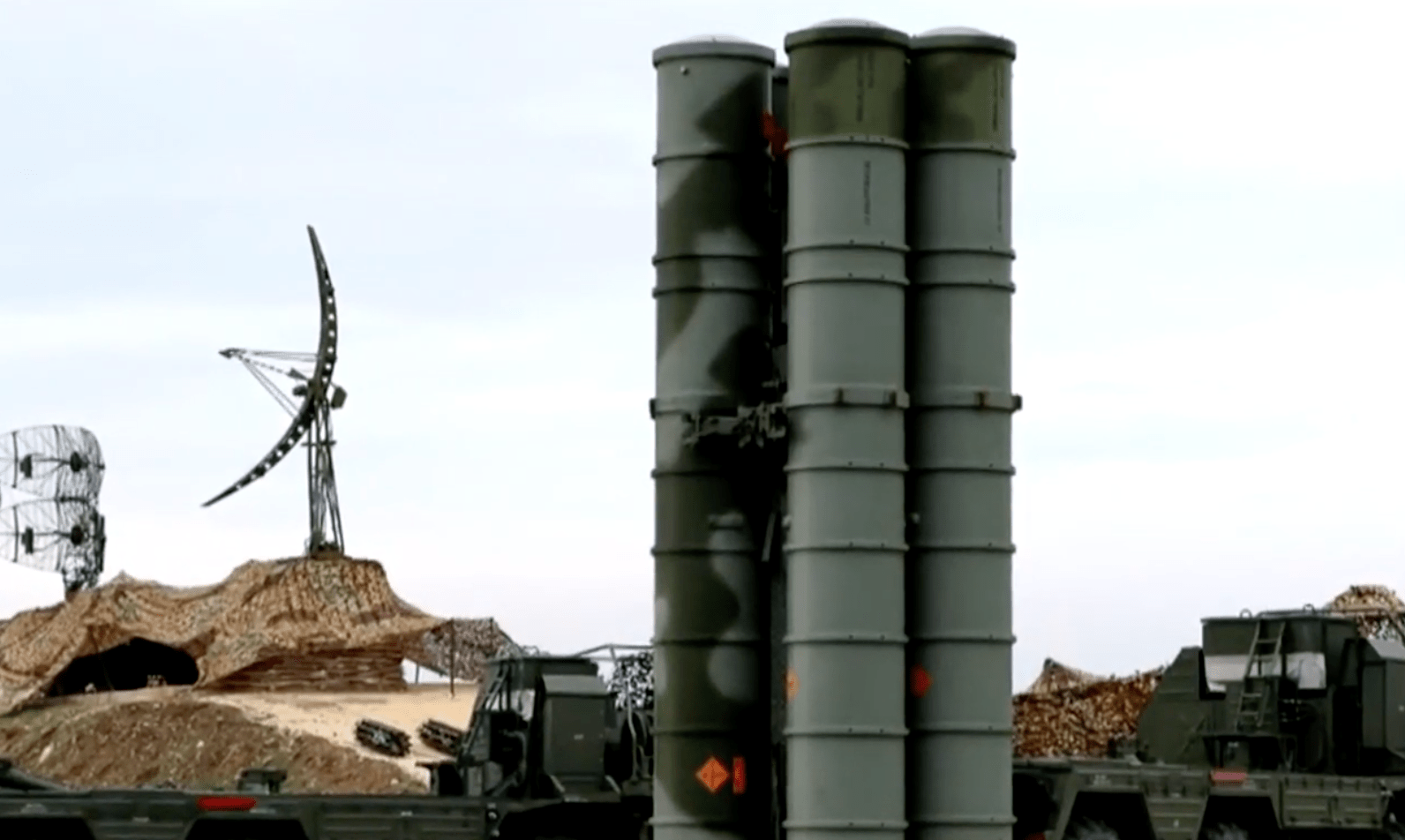 The first shipment of the S-400 missile has arrived at Murted Airbase, making it the first time that a major NATO member has made an arms deal with Russia. Following the failure to procure an air defence system from the U.S., Ankara inked an agreement with Moscow for the purchase of the S-400 missile defence system. The U.S. is outraged by this deal and was pushing Turkey to opt for U.S. Patriot Missiles instead, since the Russian missile system is viewed as incompatible with the NATO systems, including the most modern F-35 aircraft.

Earlier, the U.S. demanded that Turkey should either scrap the deal or await sanctions in the light of the Countering American Adversaries through Sanctions Act (CAATSA) if it proceeded towards the purchase. CAATSA allows Trump to impose any five of the twelve sanctions on states who make significant weapons deal with Russia. Turkey was also threatened that it would be excluded from the F-35 fighter jet program if the deal is not abrogated. Turkey was to receive 100 jets as it was part of the international consortium, which initially funded their development. To demonstrate its firm stance on the matter, the U.S. has halted Turkish pilots who were training on F-35 aircraft in the U.S.

The S-400 has the capacity to defeat U.S. stealth technology which is the stimulus for the U.S. to oppose the deal as it fears that it could be used to collect valuable intelligence on the 5th generation fighter jets. The U.S. wants to avert the situation in which intelligence regarding American-made jets that Turkey possesses, reaches Moscow as Russian technicians would maintain parts of the system.

During the G-20 Summit, President Trump requested his Turkish counterpart to let go of his ambitions of the S-400. However, Erdogan justified his decision by pointing out that it was the U.S. itself that didn’t cooperate with Turkey on its initial demands of Patriot Missiles and forced Turkey to resort to other suppliers. Furthermore, Turkey assured that it would not incorporate the S-400 in the NATO system and therefore, its installation won’t pose a threat to the security alliance. Furthermore, Turkey has also offered to establish a commission to clarify any technical issues. However, this offer has not been responded to by the U.S.

The Turkish defence minister has asserted that the purchase of the S-400 was not an option, rather a dire necessity in the light of dangerous security conditions. Turkey has ignored USA’s threat of making it ineligible for the F-35 Fighter Jet Program if it procures the S-400 missile defence system from Russia. Refusing to let go of the deal is indeed the manifestation of Erdogan’s desire of erecting a foreign policy that doesn’t infringe national sovereignty and serves the national interest.

U.S.-Tukey relations heightened during the Cold War as Turkey’s proximity with the Soviet Union rendered it a helpful ally which could be instrumental in monitoring the enemy, curtailing Soviet expansion and containing the Soviet Union in case of a war. In return, Turkey attained security assurances in the form of nuclear weapons stationed throughout the country to deter any Soviet attack. However, following the end of the Cold War, the nature of relations diluted due to the decline in shared interests. Moreover, following the invasion of Iraq, Turkey anticipates Washington as a destabilizing factor in the Middle East. The procurement of these weapons would have an impact beyond the Turkish economy as it is going to alter the strategic relations between Ankara and Washington.

The deal would further augment the relations between Russia and Turkey. Both states have surprisingly improved their relations taking into consideration recent developments: both sides support opposing groups in the Syrian conflict, a Russian plane was shot down by Turkey on its southern border in 2015, and a policeman shot Andrei Karlov, the Russian ambassador to Turkey, in an art gallery in Ankara in 2016. The positive refinement of their relations is indeed a monumental success on the part of Putin and Erdogan. At the moment, Turkey needs Russia to avert any assault by the Assad Regime on the rebel-held Idlib province where Turkey maintains certain peace-keeping groups yet backs certain rebel groups. Likewise, Russia has also aided Turkey militarily by combat operations to keep the Kurds under pressure (without causing any harm to the Assad regime). Consequently, Turkey needs to engage with Russia to secure its vital interests. The S-400 has the capacity to bring down a plane at a distance of 150 miles and intercept ballistic missiles within a range of 38 miles. Hence, it provides the Turkish Defense forces with an instrumental weapon to cover most of Syria. The deal can serve as the commencement of a new era of a relationship which can shape new regional alignment in the Middle East.

President Erdogan has expressed his concerns over depriving Turkey of F-35 jets and termed it as a “robbery” as Turkey has invested more than $ 1 Billion for its development. Though President Erdogan is quite confident that he would be able to negotiate the issue with President Trump and sanctions would not be imposed, it is yet to be seen whether or not the arrival of the initial parts of the S-400 triggers a round of international sanctions. Since there is no specified time frame to enact the sanctions under CAATSA, there is a likelihood that the U.S. might continue threats until the system becomes fully operational. This is based on the notion that the U.S. might require help from Turkey with respect to the ongoing conflict with Iran. If bilateral relations are strained, then Turkey can turn down the U.S. access to its airbases in case of a potential conflict with Iran.

As far as Russia is concerned, this deal has been beneficial at two levels. Firstly, it has opened a new window for the Russian defence industry. Apart from the S-400 deal, if Turkey is deprived of the F-35, then it would endure more opportunities for Russia to sell its Sukhoi Su-57 equivalent to Turkey as well. Secondly, this will also fracture the element of trust between NATO members; something that would be very pleasant for Russia as the military cooperation between Turkey and NATO would be jeopardized. Consequently, every step away from NATO will inevitably push it closer towards Russia.

The nature of the American response will also shape the cooperation between Russia and Arab countries, especially Egypt and Saudi Arabia. Egypt has signed an arms deal with Russia for the purchase of warplanes and the construction of nuclear reactors in Egypt for electricity generation. Likewise, Saudi Arabia is also interested in acquiring the S-400 system. Hence, in the future, if Congress refuses the sale of advanced weapons to these states, then they can curtail their reliance on the U.S. and move towards the diversification of their arsenals with Russian technology.

European states have remained silent until now, on how they are going to respond to Turkey’s acquisition of the S-400 system. There is no assurance that European states might abide by the sanctions if imposed as they have mounting interests with Turkey, such as commercial engagement, obstruction in the influx of refugees and the passageway of oil and gas, which are no less important than the NATO cooperation. Alternatively, if sanctions are not brought into play, then the European countries can question the sanctions on Iran. Even though the nature of the threat from both issues is different, but the sanctions against Iran have been a conflicting point between the U.S. and European states. Hence, this case could be used against the U.S. to augment their stance that if the U.S. can put the security of NATO at risk, then why should European countries disassociate from the nuclear agreement which has the potential for regional and international security.

The policymakers in the U.S. will remain in the dilemma of which action to execute for Turkey’s defiance. Triggering sanctions would label Turkey as an adversary and might further thrust Turkey to the Russian influence. On the other hand, avoiding sanctions would undermine American threats and could serve as a green signal for other interested states to materialize similar deals, particularly India which has already signed the deal for acquisition with Russia last October. Hence, a very calculated strategy needs to be adopted to deal with the respective issue. There is a long-standing belief among thinkers in the U.S. that Turkey sees Washington as an indispensable ally. However, the installation of Russian military hardware in a NATO member echoes the decline of the U.S. hegemony over the NATO members and Turkey cruising towards Russia as Moscow offers them a more functional relationship rather than a symbolic one.

Print PDFA couple of weeks ago, Indian Customs officials claimed that they had detained a Karachi-bound ship bearing a Hong Kong flag, and declared that the vessel carried an autoclave, which could be used in […]