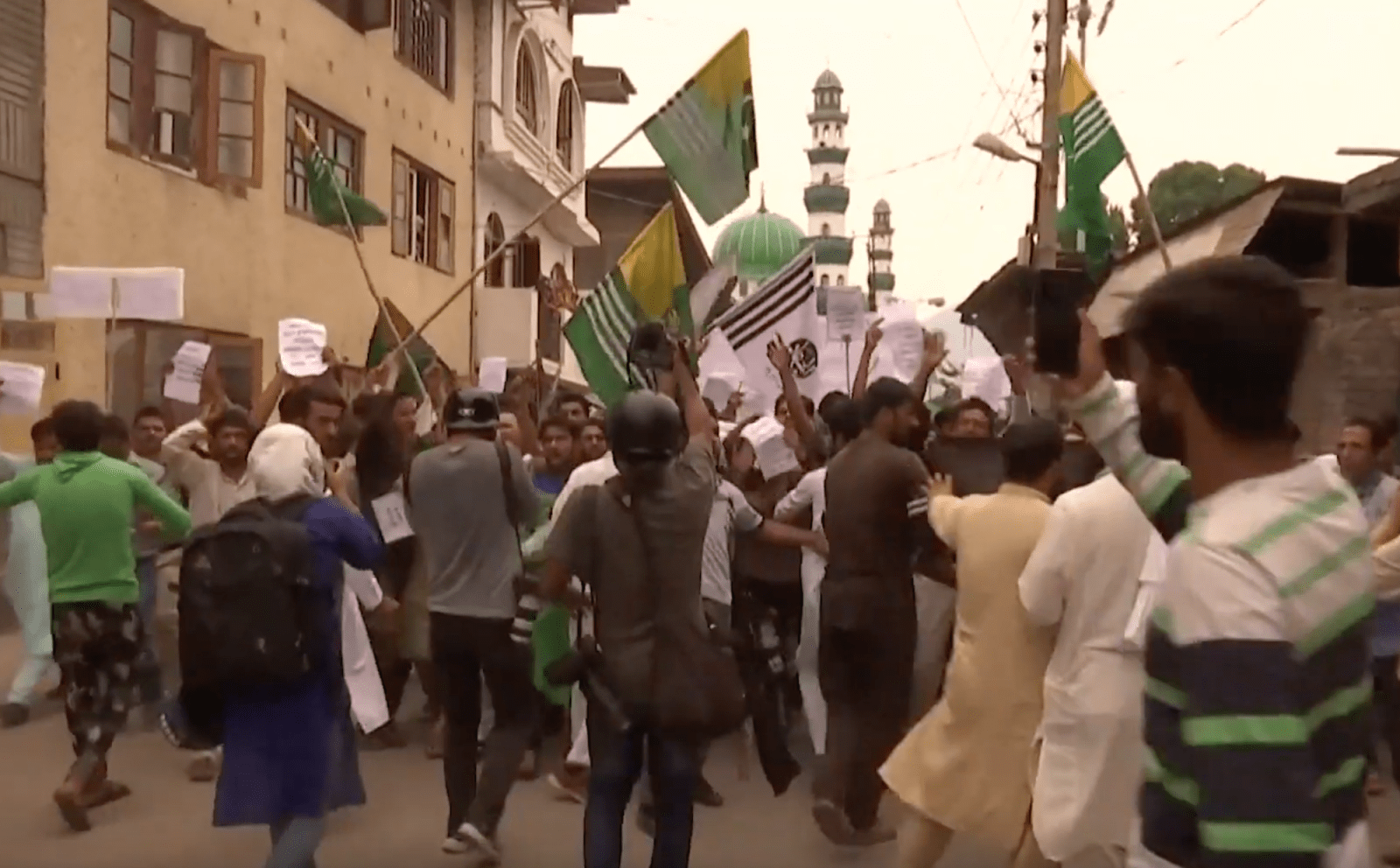 Reshaping the geographical and national boundaries by diluting the IOK’s demography and setting free the vicious politics of autocracy using a presidential order, in the world’s second biggest democracy of India, begs several important questions.  Transforming the de facto status into de jure amidst the draconian lock down has divided the state of Kashmir into two Unions: Jammu and Kashmir and Ladakh on August 5, 2019, by the nationalist government of Narendra Modi. The Lok Sabha of India also testified the resolution with 351-71 votes on the Jammu & Kashmir Reorganization Bill. The bill clearly ignores the poll conducted for the Sunday Hindustan Times newspaper, which showed that 66 per cent of respondents in the Kashmir valley wanted “complete freedom to entire Jammu and Kashmir as a new country”. Although surveys also found that support for independence tends to be weaker in Jammu, yet the number of Kashmiri youth resorting to protests for self-determination has grown substantially between 2014 and 2017.

Emboldened by the election results of 2019, the stalwart soldier of RSS, Narendra Modi, has assaulted minority accommodation by weaponizing the Hindutva impulse. Akin with Natanyahu’s state of Israel, he has finally thrown India into a nationalist shredder to uphold a longstanding wish for a non-secular and a non-democratic Hindu state. BJP has claims far beyond Indus River for Greater India. Earlier, the term ‘secular’ itself remained oblivious to Ambedkar’s Indian constitution till 1973.

Used generously, the combination of population displacement and religious xenophobia during Modi’s election campaign in 2019, the forcible integration of a Muslim majority state of Kashmir into the Hindu’s India syncs well with the Sangh Parivar’s project of redefining Indian nationhood. The multicultural and diverse dream of Gandhi and Nehru has fallen prey to the rogue declaration of today’s Rajya Sabha.

The ruling Bharatiya Janata Party (BJP) has frequently telegraphed its intention to axe Article 370, which is already described by the Indian constitution as a purely “temporary provision.” In his implausible statement, the Indian Consul General in New York said that the repeal is “purely administrative” and is intended to “improve good governance and deliver socio-economic justice to the disadvantaged sections of the people in the State” while keeping their will exclusive. The Union’s Home Minister has declared that “Pakistan Occupied Kashmir and Aksai Chin are included in it”.

Historically, Pakistan’s traditional Kashmir policy remained within the premise of the Partition Formula. Kashmir was to be a part of Pakistan. It was militarily occupied by India in 1947. In close consultation with both India and Pakistan, the United Nations Commission for India and Pakistan, resolved in concrete terms, the settlement of the dispute in two resolutions adopted on August 13, 1948 and January 5, 1949. Since both the governments accepted the Commissions’ proposals, the resolutions constituted an international agreement. Given that, Islamabad has always envisioned a free and fair plebiscite under the auspices of the UN Security Council Resolutions as the only solution. Whereas, India’s realization that it can never win the will of the Kashmiri people, made it controversial.

Pakistan proposed several approaches to resolve this vexed problem in its more than one hundred and fifty rounds of talks. Pakistan’s first military ruler, General Muhammad Ayub Khan, decided to seek an out-of-the-box solution through the arbitration of the United States and United Kingdom. As a result, an area of 3,500 square miles, adjacent to Muzaffarabad was handed over to Pakistan. On April 21, 1948, the United Nations Security Council adopted Resolution 47. After having heard arguments from both India and Pakistan it suggested holding a plebiscite for fostering peace in the region. The resolution was passed under Chapter VI of the UN Charter. The role of the UN is well pronounced to maintain a widely accepted international order based on the values and ethics of peaceful coexistence. Similarly, the President of Pakistan, General Pervaiz Musharraf, proposed his four points while picking up “demilitarization” and “self-governance” from the Andorra Model, and his counterpart Manmohan Singh agreed with the “open borders” and self-rule, from the Samantra Bose proposals to foster bilateralism.

Yet there remained a persistent effort to have Pakistan declared a terrorist state. After 9/11, the world in general and the region in particular experienced a paradigm shift with fresh geo-economic and geo-strategic interests. This further complicated relationships, since Pakistan was invariably bracketed with the rebellious Afghanistan and Taliban. India also trimmed its policies to fit in the new configuration by getting closer to the sole international power of the US.  The complementarity of the policies of Asia Pivot and Act East helped blur Pakistan’s focal role in the protracted Afghan conflict.  For Great Powers to survive, favourable regimes and states throughout the world are an important instrument. India sublet its economic and political favours to Afghanistan while fuelling the fire by fitting into Pakistan’s size as an immediate neighbour. The US also got closer to India.

On the other hand, espousing with the US in a unipolar world earned India several favours in the meanwhile.  The tendentious UN Resolution 1373 (2001) adopted by the Security Council, erroneously ignored the critical distinction between a freedom movement and terrorism. The situation was bedevilled by interpreting all resistance movements for self-determination as terrorism while giving the contrived controversial cover to India. India frequently started portraying itself as a victim of terrorism by Pakistan. An attack on the Indian Parliament soon after the 9/11, was craftily used by India to perpetuate this propaganda. The then Indian Prime Minister seized the opportunity to compare the incident with the 9/11 tragedy and ended all communication links with Pakistan. The same happened after the Samjhota Express incident in 2006, Mumbai incident in 2008, and LoC violations in 2013. India bracketed Pakistan with the Taliban, to fence its border against Pakistan and appointed half a million soldiers.

Modi’s Kashmir policy gained reinforcement while characterising largely with unchecked arbitrary arrests, torture, rape, illegal settlements, constitutional alteration and extrajudicial killings. Even the record of human rights violations in Kashmir by the occupational forces of India increased multi-fold. The world remained blind, despite the extensive documentation of the Human Rights Watch and People’s Union for Civil Liberties (PUCL), which unearthed perpetual Indian atrocities. According to the Kashmir Media Service, there had been 94,323 killings in IoK from the year 1989 to February 29, 2016, out of which 7,043 are custodial killings. About 133,387 civilians have been arrested and 106,055 structures burned or destroyed. About 22,810 women were widowed and 107,556 children were orphaned. The number of molestation or rape cases recorded is 10,175. The confident New Delhi evasively responded to all such reports and kept trying to change the demography of IoK by the settlements of non-Kashmiris. The Muslim population in Jammu has come down from 62 per cent in 1941 to 30 per cent. Efforts were already underway to gradually abrogate Article 370 from the Indian constitution which granted a special status to IoK.

The common understanding of the events in the last six decades of all the stake holders, India, Pakistan, Kashmiris and freedom fighters, has brought them to a Mutually Hurting Stalemate (MHS). In August 2015, S. J. Shankar, the Indian Secretary for External Affairs distinctly conveyed to his counterpart in Pakistan Secretary Foreign Affairs that, “India would not hold dialogue with Pakistan over Kashmir issue.” The response had come after Pakistan’s invitation for a dialogue on Kashmir.

Indigenous resistance for generations, however, decried persistently to fight for their right of self-determination and Azadi. On several occasions since 1990, the entire population of Srinagar came out to protest against the Indian occupation forces. In the year 2017, even the Srinagar High Court contested Modi’s political and declared that “the territory of Indian-held Kashmir retains an element of sovereignty and cannot be integrated into India, at all.”

Hence, the signals of a unilateral decision in the most militarized place of the world were obvious. After all, should the world have trusted a man who carried out Gujrat genocide in 2002 and killed more than 2000 Muslims during his chief minister ship?  He even acknowledged India’s involvement in the dismemberment of Pakistan in 1970, in his intimate swipe during his visit to Bangladesh in June 2015. India trained and used Mukti Bahini, the militant organization, to violate the UN Charter of non-interference and respect for sovereignty. The declaration of Indian External Affairs Minister, Late Sushma Swaraj before the General Assembly session of the United Nations on September 26, 2016 that “Jammu and Kashmir is an integral part of India and will always remain so” is a continuation of the same sequel.

Who is to be blamed? Although state terrorism could not have been better defined even today, Pakistan is truly isolated in the absence of any strong rejection of India’s atrocious acts by the international community. Pakistan wandered the world’s corridors of power—from New York to Geneva to Brussels—looking in vain for effective support. The disproportionate move has a massive potential to spin both, the region and the international order, into danger.

Pakistan is once again pushed into a quagmire with intense multi-dimensional long and short term, legal, strategic, political and moral choices to follow through. However, Pakistan must not withdraw its confidence in the international forums. Scrapping its belief in diplomacy will have lesser fruits to pick yet needs proactive lobbying. Engaging through all international forums with an insistence on diplomatic sanctions could be a simultaneous option. The world must not soften its words and declare Modi’s rogue government, a terrorist entity. India is a non-secular and a non-democratic Hindu state, contributing more fiercely to exclusivism and non-participative democracy, and it should be treated accordingly. Lowering diplomatic relations, sifting through legal options in the International Court of Justice, and cutting off bilateral pacts with an untrustworthy government, is required of a civilized responsible state. War for two nuclear states is certainly not a sensible option yet Pakistan holds responsibility towards Indians as a nation who are made hostage to a rogue thought and are being deprived of their constitution.

Print PDFBiosecurity Planning & Preparedness – Pakistani Perspective Abstract Recent academic debate has seen an increased focus on biosafety, the implementation of which is essential as dual-use biological research increases day by day. Given the […]

Print PDFAfter a protracted stay of 17 years, the United States has decided to withdraw and is in the process of negotiating a ‘Peace agreement’ that may not necessarily lead to a long term peace […]