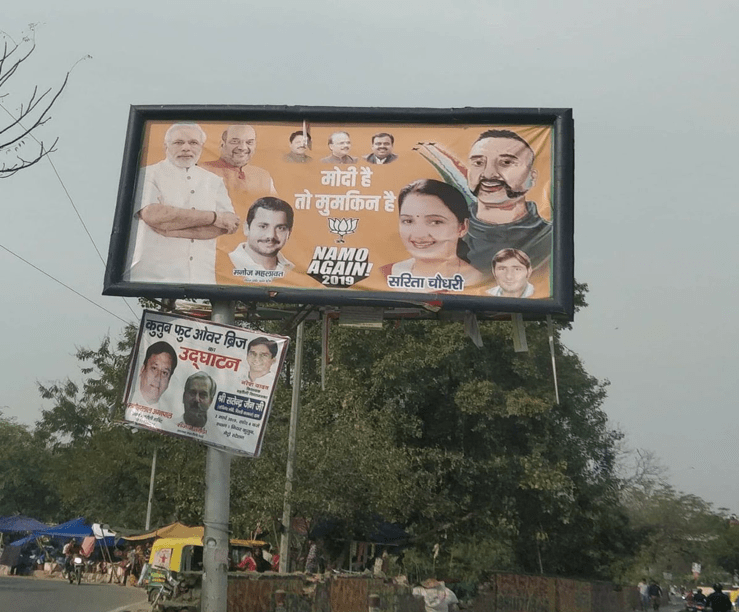 None other than PM Modi would have attempted to turn India’s military humiliation into a political gimmickry by using the images of Wing Commander Abhinandan’s into BJP’s election campaign posters and billboards. The downed Indian pilot of the Mig-21 did carry himself with dignity during his brief captivity in Pakistan, but it does not undermine the fact that he was shot down over adversary’s territory. This event alone should have deterred Modi from claiming diplomatic and political victory, but he is using it to prop his election campaign by inciting anti-Pakistan sentiments, which is leading to the rise of new form of nationalism in India – a combination of ‘militancy’ and ‘nationalism’ and could be described as the rise of ‘militant nationalism.’

This is not the first time PM Modi has used the military for his narrow political gains and to build his image of India’s ‘Iron Man.’ In 2016, once the militants attacked the Indian army base at Uri, resulting into the killing of 17 soldiers, India announced that in retaliation it had carried out a ‘surgical strike’ across the Line of Control (LoC). Since no such attack took place, Pakistan did not respond, but Modi used the incident to build his image and threatened even a bigger response in the future. A year later, Modi also announced that the Indian military would celebrate the anniversary of the 2016 surgical strike that never took place, which was akin to celebrating a birthday of an unborn child who had died during a miscarriage.

After the suicide bombing at Pulwama, India’s ‘Iron Man’ found himself trapped in his own earlier commitments. Not doing anything would have been a political suicide, and adopting a military course, would lead to an uncertain outcome. He opted for the latter and came out more bruised than before. PM Modi is now in the process of repairing his image and using the failed surgical strike for personal political gains, which has given more credence to opposition’s allegations that ‘Pulwama’ crisis was engineered by the BJP as an election winning strategy.

Using the military for domestic politics is a new and dangerous trend and could lead to a serious miscalculation in a future crisis of a similar nature. If Modi succeeds in his strategy, this will become a template for the others to build their credentials basing on the new form of ‘militant nationalism,’ which is likely to deepen the prevalent mistrust between the two nuclear adversaries further. This will diminish any hopes of resolving the bilateral disputes that continue to keep the region on the brink of a major war.

The recent surge in militant activities inside the Indian Occupied Kashmir (IoK) that Modi blames Pakistan is a result of his failed policies in the disputed territory of Kashmir. Modi has often accused the previous governments of bowing to the external pressures and not doing enough to deal with the Pakistan challenge. Under his government, the Indian security forces were given freedom to use force and employ brutal tactics to suppress the Kashmir movement. This has led to the deaths of thousands of Kashmiris and has blinded many more due to the use of pellet guns by India’s security forces.

The frequent calls by the international community and the reports of the UN highlighting the ongoing gross human rights violations in the Indian Occupied Kashmir (IoK), have not prevented Modi from using force against the unarmed civilians. This has made the Kashmir struggle more indigenous, and the recent suicide attack is an example of growing frustration amongst the young Kashmiri population that may have forced the 19-year-old Aadil Dar to blow himself up, killing more than 40 personnel of India’s CRPF.

Immediately after the Pulwama attack, PM Modi blamed Pakistan for harboring the terrorists and promised severe retribution. He publicly announced that India’s armed forces have been given a free hand to take punitive action against Pakistan at the time of their own choosing. Before the military could plan an operation, the Indian media and many retired Generals were quick to offer strategies shouting revenge and blood to evoke a false sense of patriotism amongst the masses, which led to uncontrollable war hysteria within India.

The media had raised the bar for Modi and his military, but contrary to the heightened expectations and the ‘free hand’ given by the PM, the Indian military was only able to launch a ‘non-military’ surgical strike, and that too failed to hit the intended target. India nevertheless was quick to claim 350 casualties and the destruction of several multi-storeyed buildings belonging to the militants. None of this could be proven as was the case of the 2016 strike.

The recent military debacle has exposed India’s institutional chaos and infrastructural decay. India was earlier projecting itself to be a credible military rival to China and considered Pakistan only an irritant. Post Pulwama, there would be serious questions about India’s potential to fight even a limited war with Pakistan.

India’s much-touted Cold Start Doctrine (CSD) that was being refined every year by the Indian Army to fight a limited war under a nuclearized environment, now stands discredited. The CSD was conceptualized to deal with the kind of contingency that India faced after the suicide attack in Pulwama, but it may have died prematurely, and Indian military planners would have to come up with new warfighting concepts for a future military crisis with Pakistan.

Failure to achieve military and political objectives from the recent crisis have led many Indian analysts to realize that there is no military solution to the deal with the Kashmir problem. But new and dangerous thinking is taking shape amongst India’s strategic elite. In a recent interview India’s former National Security Advisor (NSA), Mr. Shiv Shankar Menon publicly argues that instead of indulging in military strikes, India should focus on ‘covert operations’ against Pakistan, besides taking other diplomatic measures. Menon in his 2016 book had also generated controversy by arguing that there are provisions within India’s nuclear doctrine to launch a pre-emptive comprehensive strike against Pakistan, which would be a contradiction to India’s No First Use (NFU) posture.

Menon is not the only one supporting covert (terrorist) acts inside Pakistan. India’s current NSA, Mr. Ajit Doval, before joining the government had also suggested that India could destabilize Pakistan’s Baluchistan province by sponsoring ‘terrorist’ activities. The arrest of India’s serving Naval officer Kubushan Jadev from the area confirmed what Mr. Doval and others had been arguing to deal with Pakistan.

Interestingly, India can get away with this public reiteration of sponsoring terrorist acts. No other country in the world, including the United States, has ever used these threats so blatantly against another sovereign state. India and its allies remain fixated on declaring Maulana Masood Azhar, the Chief of JeM as a terrorist under the UNSCR 1267. A similar argument could be made against those who openly propagate for terrorist activities against Pakistan.

The outcome of the current crisis may have precluded the possibility of a military conflict between the two nuclear powers in the immediate future, but the rising tide of ‘militant nationalism’ centered around anti-Pakistan sentiments within India, would reduce the space for the future Indian government to enter into a dialogue with Pakistan. And, failure to resolve the outstanding disputes would keep the region vulnerable to a similar crisis that could end up into a major war between the two nuclear adversaries.

Print PDFWith the illegal abolition of special status granted in the Indian constitution to Kashmir Narendera Modi’s has now proven beyond doubt that he wants to cast a secular India into a Hindu Nationalist State. […]

What It Means for Pakistan to Stay on FATF Grey List?

Print PDFLast week, the Financial Action Task Force (FATF) decided to keep Pakistan on its ‘grey list’, with the country’s status set to be reviewed next at an extraordinary plenary session in June 2021. The […]