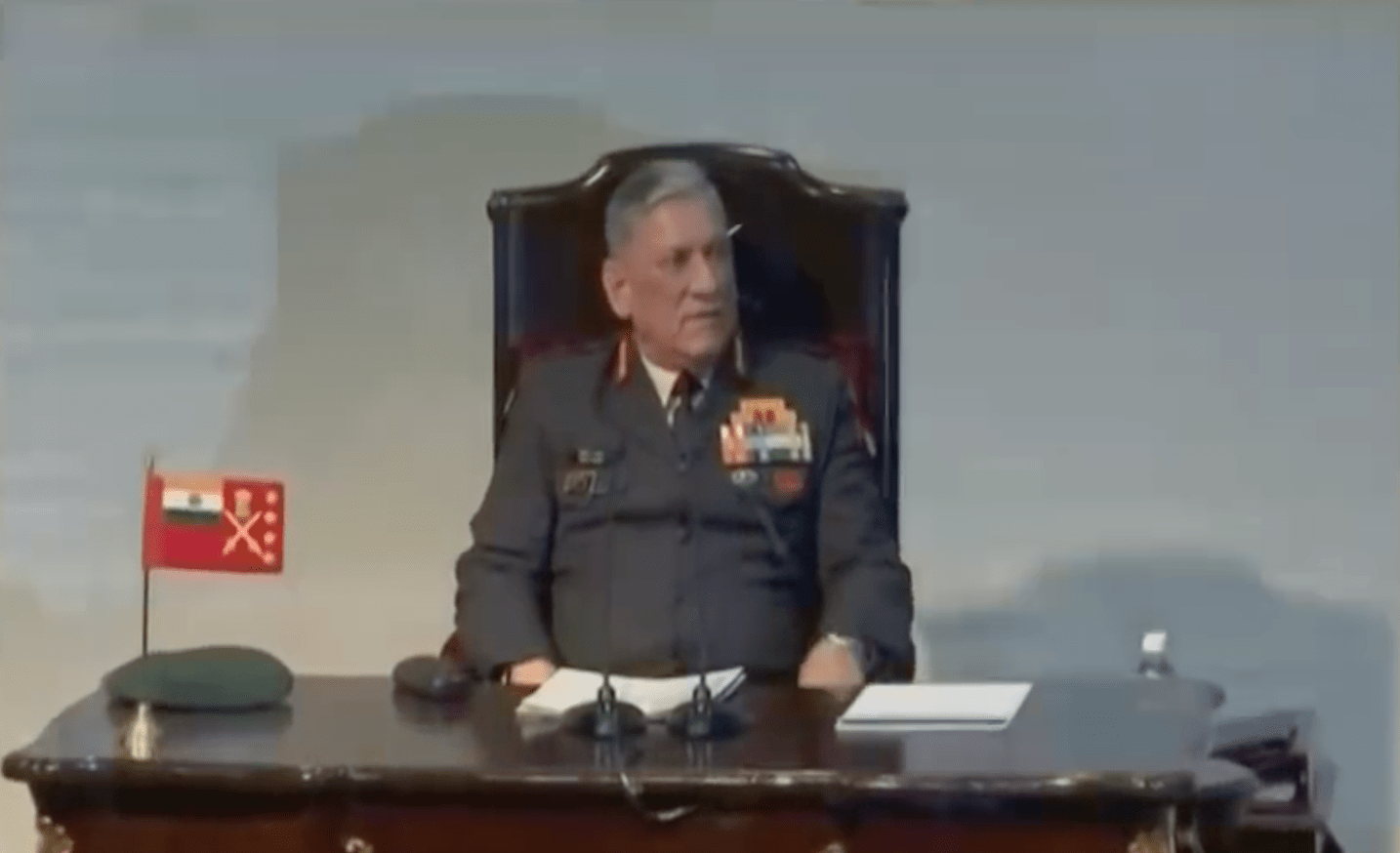 The Indian military is often criticized for not delivering in times of crisis. The Feb 2019 crisis is the most recent example that not only exposed the Indian Air Force (IAF) to domestic and the international criticism, but also highlighted serious deficiencies in India’s military decision making process. To address these shortcomings, India’s political leadership has announced the creation of a new post of Chief of Defence Staff (CDS) and appointed Gen Bipin Rawat as the first CDS. The move itself is a recognition of the long-standing structural anomaly in India’s military management structure and it is expected that the new appointment would help bridge the gap and bring synergy amongst the three services.

It is therefore important to understand the complexities of India’s existing decision making process; the history of inter-services rivalry; the implications of hyphenating conventional and nuclear war planning under Gen Bipin Rawat as the new CDS; and why these deficiencies may not necessarily be addressed through structural reforms, but could be a result of India’s ‘delusional’ view of becoming a global power without having the requisite capacity and clearly defined objectives.

The decision to appoint CDS was announced by PM Modi during his Independence Day speech in August 2019 as a follow-up to the recommendations made by the Kargil Review Committee and several other expert panels. Gen Bipin Rawat, who is a four-star serving general and completed his three-years tenure as the Army Chief will act as the Principal Military Advisor to the Defence Minister. The CDS will not hold any military command and will head the newly created Department of Military Affairs (DMA) in the Ministry of Defence (MoD). He will also assume the role of Permanent Chairman Chiefs of Staff Committee (CoSC) assisted by the Chief of Integrated Defence Staff (CIDS) as the vice CDS.

This is not the first time that the Indian government has attempted to appoint a CDS. In 2001, the then Chief of Naval Staff (CNS) Admiral Sushil Kumar was all set to take over as the CDS, but due to resistance from within the services, the proposal was dropped. The recent appointment has been announced after prolonged consultations amongst all the stakeholders and after learning lessons from the previous crises, including the Feb 2019 failed aerial surgical strike against Pakistan that damaged India’s image of a credible military power in the region.

Since the new CDS will have administrative control of the Strategic Forces Command (SFC) and also act as a ‘channel of control’ between the Nuclear Command Authority (NCA) and the strategic forces, it is therefore expected that the appointment will help bring synergy amongst all three services and the (SFC). Prior to the creation of the new appointment, India’s SFC was under the control of CoSC, who was appointed on the basis of seniority from the three services and was supported by CIDS. Due to short durations of the successive CoSC it was difficult to maintain the required oversight over the strategic forces. With Gen Rawat appointed as the permanent CDS, it is expected that it would help bring continuity and improve India’s strategic planning.

Before the creation of the CDS post, India had also introduced Strategic Planning Staff (SPS) on the pattern of Pakistan’s Strategic Plans Division (SPD), which worked under the CoSC. This group of people, comprising military, scientific community and bureaucrats, was responsible for the development and management of India’s nuclear capability. Since the new CDS would also be the Permanent Chairman CoSC, therefore, it is likely that SPS could also be shifted to the office of CDS. This is likely to be challenging as CDS would be dealing with both conventional as well as nuclear war planning while working in the MoD, thus making it difficult to maintain the desired separation between the two.

Without clearly defined role and task, the appointment of CDS would only add another layer of decision making with no visible advantage. Moreover, the appointment could also create discomfort amongst India’s ‘strategic enclave’ that comprises of the military; the scientific community, essentially the Defence Research and Development Organization (DRDO); and the political leadership.

The military that mostly remained outside the nuclear decision-making process could now attempt to assert their preferences through the office of CDS. The DRDO, which enjoyed considerable autonomy in developing new systems, often without the input of the users (military) may find itself constrained since the CDS office has the mandate to define future weapon requirements for all the services, including the SFC. Likewise, the political leadership would have a difficult task of restraining the inter-services rivalry, while keeping a check on the military’s ambitions to develop new war-fighting doctrines which may also include the option of preparing for nuclear warfighting.

The civil-military turf war on nuclear matters has been a source of friction in India and has been highlighted by several former senior military commanders. Admiral (Retd) Koithara, the former Commander of India’s Naval Strategic Force, in his book, “Managing India’s Nuclear Forces”, wrote that the reluctance by India’s political leadership and the scientific community to include military in the nuclear decision making process has led to what he terms as “retarded deterrence understanding”, which he believes is based on abstract and dubious assumptions and has prevented India from fully operationalizing its nuclear forces. According to him, Pakistan, despite its difficulties, has managed to project adequate deterrence through appropriately tailored strategies and clearly articulated management structure.

India’s 2017 Joint Doctrine of Armed Forces, that was released by the Office of CoSC, also emphasized on the need to incorporate the military’s input in the decision-making process. According to this Doctrine: “it would always be essential for the civilian authority, in consultation with military (as part of decision-making process) to decide the Military Objective and then leave it to the military professionals to decide upon the best way of achieving the objective.” The civilians however do not fully endorse the Indian military’s apprehension.

India’s former Chairman of National Security Advisory Board (NSAB), Mr Shyam Saran believes that the notion of India’s armed forces not being included in the strategic decision-making process and that they play second fiddle to the civilian bureaucracy and the scientific establishment – is not factually correct. But he did acknowledge that “military’s inputs into strategic planning and execution should be enhanced to make India’s nuclear deterrent more effective.”

India’s military decision making deficiencies are not structural alone but are a result of perpetual disconnect between its ambition to be recognized as a major power while lacking the capacity to pursue the national objectives. The US and several other major powers are trying to bridge this gap by assisting India in building its military potential and emerge as a credible rival to China. India, nevertheless, has so far have not been able to extricate itself from the South Asian Regional Security Complex (RSC) and de-hyphenate its security relationship from Pakistan. Instead of pursuing global objectives, the Indian political leadership has become increasingly reclusive, and is struggling to redefine India as a ‘Hindu’ state.

The decision to introduce structural reforms in the military by institutionalizing the post of the CDS, is likely to create discomfort at the operational level, due to divergent goals being pursued by each of the four military arms. India’s Army, which is the largest in terms of numbers and gets a major portion of the defence budget has shifted its focus towards land-based ‘low impact’ and often ‘high casualty’ surgical strikes after failing to put into practice its Cold Start Doctrine (CSD). The Indian Air Force (IAF) is aiming to achieve air supremacy by acquiring next generation aircraft that could potentially help create space for ‘high impact – low casualty’ aerial operations against Pakistan in the future. The Indian Navy seems to be moving on a completely different trajectory. It is planning to acquire at least three aircraft carriers, besides a fleet of nuclear-capable ballistic submarines for power projection beyond the Indian Ocean.

The SFC is facing challenge of maintaining a credible deterrence posture against two asymmetrical adversaries – China and Pakistan. Recent controversy generated by India’s leadership on the issue of ‘No First Use’ posture threatening Pakistan with a ‘First Strike’ has brought additional burden on the SFC, which is already struggling to wrestle with DRDO imposed technological solutions that are often in conflict with India’s doctrinal postulations. The development of short-range tactical nuclear weapon (Prahaar) and other missiles by the DRDO are few examples that could push India towards nuclear warfighting in the future.

In view of these different trajectories, it would be an uphill task for Gen Bipin Rawat to build a consensus on the future force requirements and develop a coherent military posture in line with India’s national objectives. Gen Bipin Rawat’s personality would also be an important factor for implementing the outcome of the structural reforms that India’s political leadership wants to institutionalize through the office of CDS. As Army Chief, Gen Rawat was well known for making controversial statements that made headlines, but as the CDS and military advisor on nuclear matters to the government, his infatuation with media may lead to unwarranted nuclear signalling that could trigger a serious crisis between the two nuclear-armed countries. Finally, the new appointment of CDS is likely to add another layer of decision making, and with all the major stakeholders trying to assert independence and pursue their independent objectives, India’s military management structure could eventually become more convoluted.

About Dr Adil Sultan 37 Articles
Dr Adil Sultan is Acting Dean and Chair Department of Aerospace Sciences and Strategic Studies (DASSS) at the Air University, Islamabad. He is also the co-founder of STRAFASIA (https://strafasia.com) He can be reached at [email protected] and tweets @adilsultan

Print PDFThe first batch of 5 Rafale jets landed at the Ambala airbase in India on 29th July, 2020. The induction of these fourth-generation jets has been hailed widely in India and the notion prevails […]

Print PDFThe alleged mastermind of the recent bombings in Sri Lanka is believed to have been trained in India. A top Sri Lankan military source has stated that “We also suspect that some of those […]

Is America receding into self-isolation or is the balance of power shifting?

Print PDFSince the end of Cold War and the obsolescence of the bipolar world order, global politics took a new and unprecedented turn. Realists in international relations thought surmised that because maintaining balance in a […]