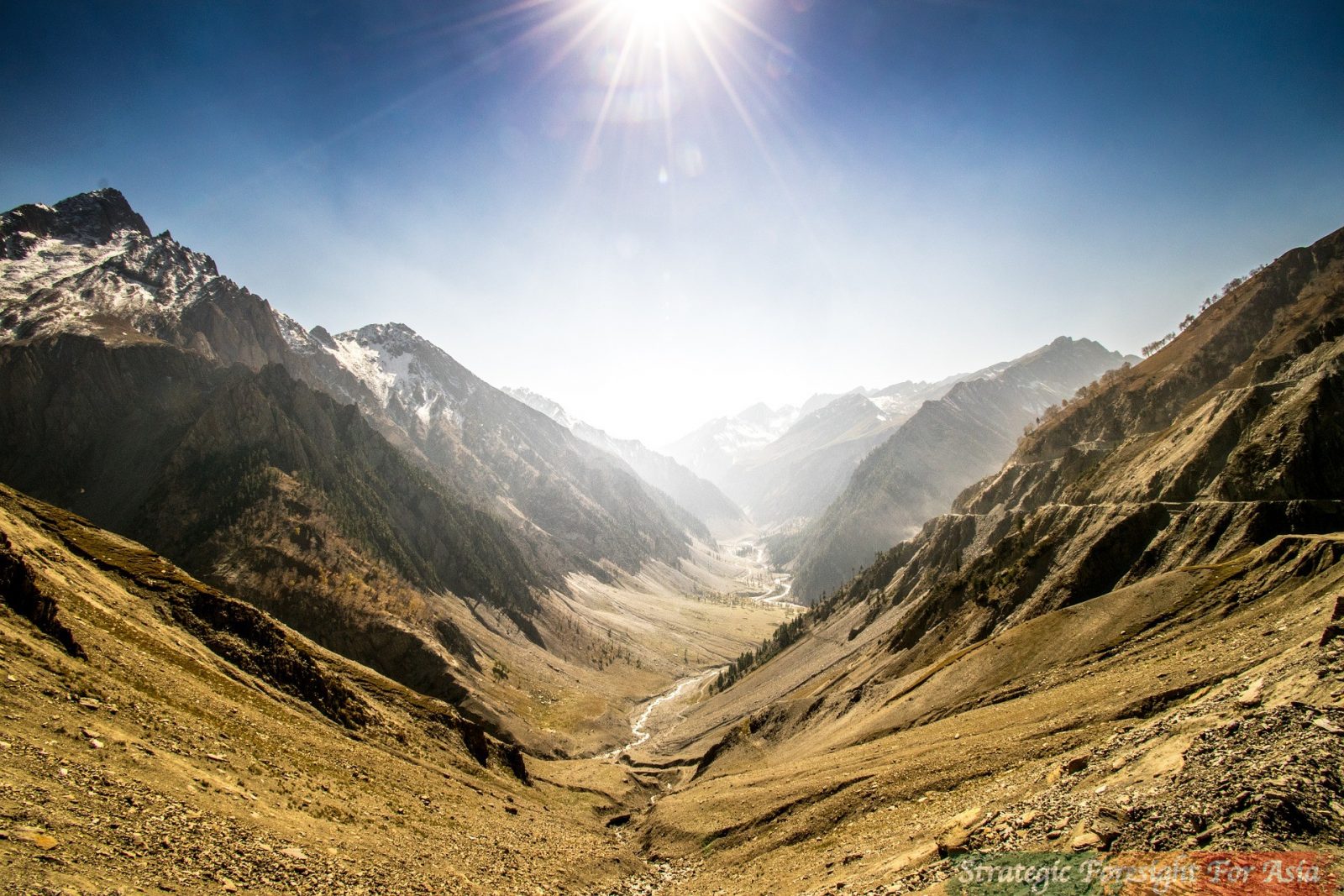 The Kashmir conflict remains the most pressing concern between Pakistan and India. Since their independence from colonial rule, Kashmir has shaped and plagued politics between them, resulting in multiple wars and various skirmishes. Given that the conflict arose after independence from the British, a ‘post-colonial’ approach to the subject may provide a better understanding and suggest a way forward. This analysis focuses on the cultural legacy and impact of British imperial rule, concentrating on the human and systematic consequences of the control and exploitation exercised over those colonised. From this lens, it becomes evident that Kashmir has been subject to the after effects of imperialism.

The day on which a state declares independence from colonial rule does not indicate a complete separation but a starting point in the transition from colonisation. For India and Pakistan, this date was 15th and 14th August 1947, respectively. Kashmir is one complex example of this post-independence process. British rule in Kashmir was administered through local rulers (Maharajas), who were provided British military and administrative aide. Much like the other Princely States (British states in India ruled by local leaders), Kashmir was unrepresentative and autocratic. Its Dogra dynasty were Hindus ruling over a Muslim majority population and faced multiple protest movements from the latter. This shows that fault lines in the colonial rule of Kashmir were in place at the time of its inception, and later formed the building blocks of the Kashmir conflict as we know it today.

The Kashmir issue is riddled with opposing accounts of and claims to the territory. When the South Asian subcontinent gained independence, the Kashmiri ruler Hari Singh remained undecided on whether to join India or Pakistan. His delay prompted an attack from tribal leaders from the region west of Kashmir. Some scholars, such as Riyaz Punjabi in ‘Kashmir Imbroglio: The Socio-Political Roots 1995’, claim that the attack was directly conducted by Pakistan. However, that claim disregards many precedents, one of them being the long-standing opposition to and protests against the rulers installed by the British. The attack, which resulted in Singh asking India for help, was more of a local uprising due to the delay (and a possible refusal) in joining Pakistan as the decolonisation principle suggested. The excessive colonial inheritance and negligence towards messy situations can lead to instability and conflict which can be observed in Kashmir.

Lord Mountbatten, Governor General of India at that time, was a cog in the aforementioned colonial inheritance. He had accepted the Instrument of Accession (to India) signed by Hari Singh. However, the nature and logistical possibility of it had been made questionable as outlined by Alastair Lamb in ‘Kashmir a Disputed Legacy’ where he brings up the different accounts by Mehr Chand Mahajan and Vappala Pangunni Menon. Mahajan reported having flown back to Kashmir on 27th of October to acquire the official and signed Instrument of Accession whereas Menon claimed the date to be the 26th and the actual document also showed 26th of October. That leads to the possibility that the acceptance of accession and the Indian intervention took place before the formalities had been completed.

This Instrument of Accession held that the final decision would be based on a plebiscite, as assured by Lord Mountbatten and later by Nehru (Prime Minister of India at that time). However, there was no practical implementation of the plebiscite, and instead, Kashmir was occupied by Indian forces. Other states which faced a similar situation were Hyderabad and Junagadh, both Princely States with a Hindu Majority and a Muslim ruler. When Hyderabad expressed a leaning towards independence and Junagadh acceded to Pakistan, they were met with military aggression and eventual annexation by India; their Hindu majority population was cited as justification for the act. This contradictory stance by India did not receive an appropriate response from the concerned authority.

Over time, India and Pakistan have contested for the disputed territory of Kashmir, from various societal, religious, historical and international aspects (specifically that of the United Nations). Pakistan asserts that the Kashmir conflict should be resolved by article 1(2) of the United Nations Charter which grants the right to self-determination, as per the resolutions passed in 1948 and 1949 by the United Nations Commission for India and Pakistan (UNCIP), and that the predominant Muslim majority must be taken into consideration. India has mostly rebutted by stating that the plebiscite for self-determination is subject to the withdrawal of Pakistani forces Kashmir, and the withdrawal of Pakistani support for the secessionist movement; it also claims that the inclusion of a Muslim state in India would further strengthen its secular state-building goal. The failure in reaching a solution has resulted in Kashmir now being a victim to a humanitarian crisis. This has also been the root cause of major wars that took place between India and Pakistan as well as the events that took place earlier this year.

Right after independence when the Kashmir dispute erupted, the world powers took a stance and echoed Nehru’s stance of an impartial plebiscite. Resolution 47 of the United Nations Security Council was based on this unanimous, and even moral, principle. However, these powers have so far remained silent, apart from generic statements condemning the persistent humanitarian crisis. This is despite their initial and direct involvement and is especially true of the United Kingdom.

According to international law, Kashmir is a disputed territory, regardless of the claims made by India; the movement in Kashmir is not separatist in nature but is one against foreign occupation, rendering the Indian occupation as illegal. Yet, the various human rights violations have not been effectively addressed by the major powers.

Given that the current situation is a result of colonial influence and ongoing negligence, a multifaceted approach could be adopted by these powers whereby indigenous stakeholders are brought into the discourse; it should be supported by the international political will to ensure an outcome. Precedents in this area include international sanctions against those committing the violations. From there it would be best to move on towards categorically addressing the crux of the issue before implementing possible solutions for a constructive approach.

Indian military and paramilitary personnel have been at the forefront of violence and abuse towards Kashmiris, the result of which has been devastation without precedence. International human rights organisations have produced various reports on the continued violations in Kashmir;  whilst mentioning violations by the militants, they hold the Indian government responsible for acts including rape, executions, illegal detention, torture, etc. and cite unsatisfactory responses towards addressing them. Even if it is argued that these human rights violations are in reaction to the Kashmiri separation movement, as claimed by India, the caste-based and ethnic violence reported by Amnesty International (2015) would disprove any such reasoning.

Given the aforementioned circumstances and the illegal occupation, India’s relation with and its presence in Kashmir can be considered as post-colonial imperialism. The surprising aspect, putting aside the imperial and illegal occupation of a foreign land, is that the UN resolutions were not in isolation of the Indian and Pakistani viewpoint; they were the result of negotiations in the UNCIP which took place with the consent of both states. As a result, India’s continuing presence in Kashmir becomes even more questionable. Mowahid Shah in ‘Danger in Kashmir’ pointed out that the UNSC resolution regarding the plebiscite was not subject to any conditions of disbanding the ‘Free Kashmir’ movement. The Indian representative, however, had contested that, India’s acceptance was dependent on such a disbanding; due to which, initial efforts to resolve the matter came to a halt. Any further interpretation or possible solution that fails to accept the post-colonial imperial nature of India may become inherently problematic.

Scholars that have concerned themselves with the Kashmir conflict have been mostly divided on the solution. Some have advocated for action to be taken according to the UN resolutions, while others have pushed for the further inclusion of Kashmiri voices in the efforts. Shaheen Akhtar in ‘A Response to the Kashmir Conflict’ and Nasreen Akhtar in ‘Intra-Kashmir Dialogue: Need for Consensus’ have highlighted that the complex issues surrounding Kashmir are not just territorial; they assert that a comprehensive political dialogue inclusive of the Kashmiri voice should be the next step forward. This viewpoint is more inclusive and improvement, to an extent, on previous approaches.

A major reason for the continuity of the Kashmir conflict has been that all efforts so far by India, Pakistan, and the international powers have been rooted in a conventional understanding and approach towards the issue. Treating it as a mere interstate territorial dispute may be inadequate, the reason being that this approach has been based on imperial relations and power-play in the past and present. Any direct action that exists in the current set of solutions would be ineffective; it would only be another iteration of the existing bias in the discourse which has so far shaped the approach and understanding towards Kashmir. In order to formulate a way forward for the Kashmir conflict, it is imperative that a foundational restructuring take place, with consideration of the societal, historical and cultural aspects of the region. Only then could there be a platform on which the problems surrounding Kashmir can be discussed adequately and a practical solution sought.

The 74th UN Session: Kashmir is Somewhere Between Fear and Abyss

Print PDFHailed as a hero for calling out New Delhi’s draconian measures in occupied Kashmir, Imran Khan warned the world of a “bloodbath” once India lifts its lockdown of Jammu and Kashmir. He persuaded global leaders to […]

Nuclearization of South Asia: 22 …by Arsim Tariq19 hours ago