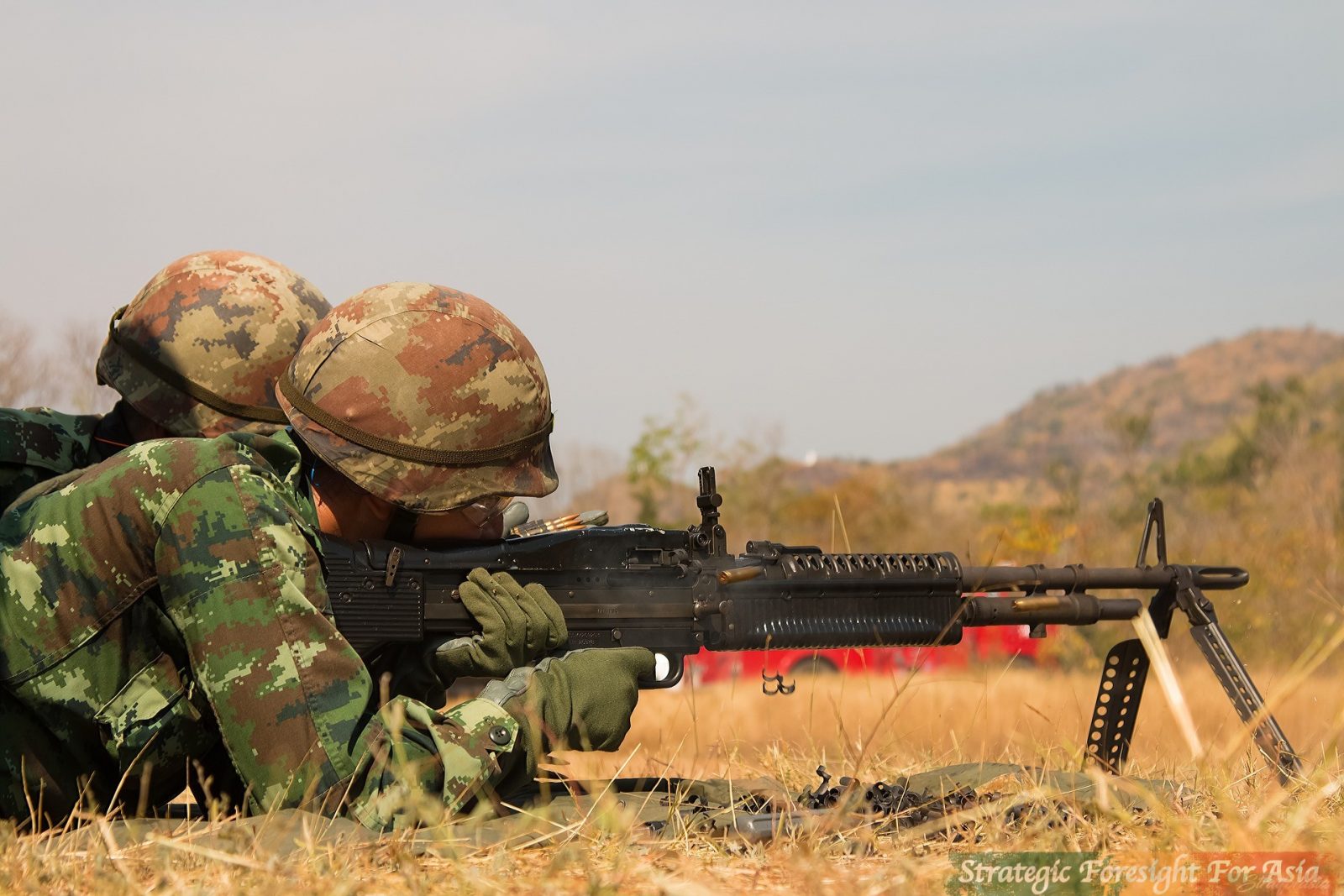 Like many crises in the past including the more recent Pulwama crisis of 2019 between the two South Asian nuclear-powered states indicate both India’s continued ambitious for limited strikes against Pakistan and the existence of an acute inter-state rivalry between the two rivals. Also, this reflects that although nuclear weapons have deterred and still continue to deter bigger wars between India and Pakistan, nuclear weapons have certainly not deterred the crises and dangers of escalation to serious conflicts in South Asia. Non-state actors, terrorism, cyber espionage, border skirmishes, and multiple crises are challenging the core ingredients of nuclear deterrence.

These challenges would require alternative and correct strategies to fight against these emerging challenges rather than merely letting these threats to escalate to a level of unthinkable. It is up to the South Asian leadership to opt for right strategies against these odd threats that undermine the peace and stability of the region. That being noted, nuclear states need to be extremely careful not to blame each other directly because of these emerging challenges without actionable evidence, and plausible strategies to cope with these threats without crossing the defined red lines. Dangerous escalation between the strategic rivals could lead to bigger military confrontation and unthinkable miscalculation. When it comes to cost and benefit analysis, the cost certainly can be much higher than the benefits one may tempt to gain.

Pulwama episode that certainly endangered a serious crisis escalating to a military conflict between India and Pakistan reflect the shared weakening of confidence-building measures. Failure of learning credible lessons from the past crises, and dangers of more crises in future between the two South Asian rivals despite possessing deadly weapons bolstered with sophisticated delivery systems that can mutually destroy each other which neither South Asian rationale leadership would want this to happen in the first place.

The key question is: why India continues to be assertive and ambitious for waging limited strikes and possibly a limited war against parts of Pakistan under the credible nuclear overhang in South Asia. Also, it is imperative to know whether or not India calculates the strategic consequences of its self-perceived strategy for the so-called surgical strikes by achieving its military and political goals? There can be multiple reasons for Indian ambitious civilian and military leadership to achieve their political and military goals, but some of the plausible factors remain significant that provide India the confidence and incentives to go for, even though it may lack the credible capability.

Over Ambition for Carrying Out Surgical Strikes.     When it comes to essential ingredients of deterrence –that is, capability and intention, capability and the application of capability matter much more than intention because intention can be changed overnight. But, ambitious intention with poor capability can cause the dangers of escalation and risk of war in South Asia. For example, a state may intend to be extremely ambitious, say, India in the wake of Pulwama incident to strategize and preempt parts of Pakistan from the Line of Control (LOC) to achieve its limited goals, without intending to provoke Pakistan to react. India however, failed to achieve both its military and political goals the way it might have wanted. It rather instantly provoked Pakistan to respond against India’s act of aggression across the LoC by at least shooting down two of its Mig 21 fighter jets. Unnecessarily, this could potentially trigger a major military confrontation between the two rivals.

The failure of producing credible evidence of what Indian security leadership intended to reflect India’s internal structural and technical weakness despite India’s consistent increase of its defense budget and increasing billion dollars strategic partnership with major leading countries including the US. Theoretically, India might have intended to achieve specific ambitious goals through its so-called surgical strike planning, but in practice India had to quickly de-escalate, show restraint, and back-off from its failed strategy especially when the Pakistani nation got united, and its armed forces responded befittingly by declaring that it can do so “at the time and place of its choosing.”

Ambitious strategy and intention with poor capability often doom away, but they also risk the dangers of escalation between the two rivals particularly when they are in acute inter-state rivalry. Next time around, India’s act of aggression across both the LoC and international border while penetrating deep into Pakistani territory can be extremely dangerous in South Asia. India, as a self-proclaimed responsible state with aspiration, to rise as a regional power cannot strategize to preempt Pakistan possessing strong conventional and nuclear forces because of the crisis that India could possibly prevent in the first place.

Escalation Dominance and Power Projection.          Like the classic Cold War strategic imperatives where both the US and the Soviet Union endeavored to retain their escalation dominance and power projection against each other, particularly when each side built thousands of nuclear weapons along with their delivery systems trying to outpace each other in such a strategic competition; India attempts to retain both escalation dominance and power projection against its potential adversaries in the broader Southern Asia. India can neither be the former Soviet Union nor the US, and it may not exactly match with what the Cold War superpowers strategized to practice.

Overconfidence on Increasing Strategic Partnership.          India with its economic boost, growing economic ties with many major countries across the world including its strategic rival China, and its potential strategic partnership with many leading countries such as the US, Russia, China, Israel, and France most probably have provided India major incentives to expand its strategic outreach, even if it risks to violate the sovereignty and territorial integrity of its neighboring states.

India exploits this timely and turns these opportunities to the fullest of its strategic advantages having the confidence that major countries stakes are higher because the kind of money India spends to buy nuclear technology and advanced conventional weapons from these countries that help shape the international politics. Why would these leading powers oppose India’s strategic motives in South Asia when each of these countries would compete in an evolving Indian economy and supports India’s aspiration to rise as a regional power?  Whether or not India possesses the right type of capability and has a correct strategy planning for limited strikes against Pakistan, its growing strategic partnership with major powers certainly boosts up India’s confidence to exploit crises for escalation to its advantage even if it may lead to a dangerous miscalculation. In doing this, India tends to erode the deterrence stability of South Asia by raising the ante to its strategic favor.

Arming for Counterforce Targeting.       Although still far from the classic counterforce targeting strategy as this would require much more refined technological advancement and major conventional force modernization, post-Pulwama crisis and India’s consistent struggle for its so-called surgical strikes reflect India’s motives to advance its capability for counterforce targeting. The internal debate in India and the current political sentiments indicate that India might be marching towards such a strategy to become a counterforce cow-boy planning to hit as many Pakistan’s deterrent forces as it can in a preemptive first strike without even provoking Pakistan to use its nuclear weapons first and later use its retaliatory forces.

Many in India may perceive that India strategic planners may have the confidence to protect India through its deployed defense systems against the remainder 5% to 10% of Pakistani forces. However, the tragedy with evolving counterforce strategy is that it has no substantial empirical evidence. Also, it is not guaranteed whether or not State A possessing overwhelming technological advancement and counterforce targeting forces could destroy all of the targets of State B in one go without provoking the latter to retaliate effectively particularly when the latter is extremely good at producing effective countermeasures. This even becomes more difficult and complex between two credible nuclear weapon states.

Both the Soviet Union and the US produced thousands of nuclear forces for achieving first strike capability, but they have never used preemptive counterforce strikes because even few forces used in retaliation could become unacceptable to both the US and the Soviet Union. The Cuban Missile crisis still remains a classic example in this context, and there are plausible lessons for South Asian nuclear rivals. They were under Mutual Assured Destruction (MAD) despite their capabilities for counterforce targeting.

MAD has arrived in South Asia. The counterforce cowboys for South Asia have yet to wait to collect concrete evidence before correcting and proving right their side of the story.  In doing this, it may be simple to draw the theoretical framework for such a strategy, but it becomes more complicated when it comes to practice. MAD causes mutual vulnerabilities when it comes to counterforce targeting strategy between nuclear weapon states. Post-Pulwama air strikes by India may encourage India to strategize for counterforce targeting, but it certainly cannot be guaranteed whether or not India will remain successful in doing this.

Revisiting the Dialogue Process and Restraint Regime.       India and Pakistan must sit together to discuss all issues including the longstanding issue of Kashmir. We have also observed that the consistent absence of regular talks between the two rivals has also produced many crises in South Asia. It cannot be wrong to mention that the more India and Pakistan get away from direct talks, the more this creates communication gaps, and the worse the gaps are exploited by non-state actors.

Leading powers including the US still need to play a balancing role without taking sides. Nuclear deterrence is very much in place deterring bigger wars in South Asia, though the risk for more significant escalation to nuclear level cannot be ruled out, and more importantly, there is a need for both India and Pakistan to bilaterally undertake serious and concrete steps towards de-escalation, normalization, and prevention of future crises.  Therefore, there is a need to revisit the proposed strategic restraint regime what Pakistan earlier proposed and India rejected. It will be in the mutual benefit of South Asian nuclear rivals to sustain peace and stability and ensure deterrence stability.

India and Pakistan: Need to move beyond skirmishes

Article 370: What Made PM Narendra Modi do it?

Print PDFThe Indian government led by PM Modi under BJP rule revoked the special status of Jammu & Kashmir by scrapping Article 370. This act of Modi may have surprised people but it was not […]